Both rapped for breaches relating to anti-money laundering laws
Jamie Lee leejamie@sph.com.sgJamieLeeBT
Standard Chartered Singapore and Coutts Singapore have been slapped with fines by the central bank, putting them in the circle of private banks censured or punished for funnelling 1MDB's tainted flows.
PHOTO: REUTERS

STANDARD Chartered Singapore and Coutts Singapore have been slapped with fines by the central bank, putting them in the circle of private banks censured or punished for funnelling 1MDB's tainted flows.

The Monetary Authority of Singapore (MAS) on Friday handed StanChart Singapore a fine of S$5.2 million for 28 breaches linked to anti-money laundering (AML) laws - the second-largest fine after that meted out to BSI Bank Singapore.

Fines are not the most lethal ammunition in MAS's arsenal. Being ordered to shut is - and this ultimate penalty was dealt to the Singapore operations of BSI Bank and Falcon Bank earlier this year. 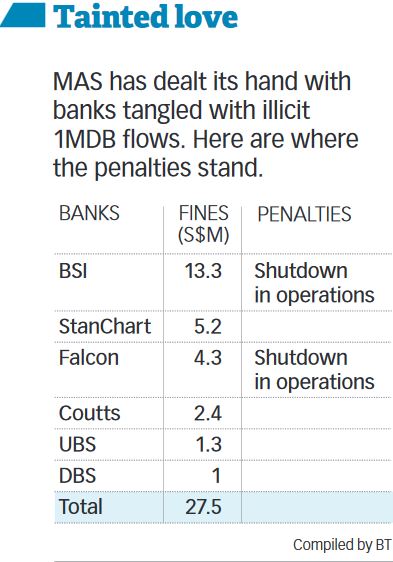 MAS said that the inspection at StanChart revealed "significant lapses" in the bank's customer due-diligence measures and controls for ongoing monitoring, and that these had resulted in numerous breaches of MAS's AML regulations.

The central bank said of the breaches at StanChart Singapore: "The control lapses stemmed from inadequacies in policies and procedures, insufficient independent oversight of front-office staff and a lack of awareness of money-laundering risks among some bank staff."

In the cases of DBS and UBS - which were fined in October, also for AML lapses - MAS had identified "specific officers" at the two banks who failed to administer controls. It also found fault with the way both banks had brought in new accounts, their level of scrutiny of customers' transactions and their failure to file "suspicious transaction" reports in a timely manner.

StanChart Singapore, on the other hand, was penalised for its handling of such funds between 2010 and 2013.

Still, MAS's inspection did not find pervasive control weaknesses or wilful misconduct at StanChart Singapore. "MAS notes that the bank has pro-actively taken measures to address the weaknesses identified and to strengthen its controls."

As it did with DBS and UBS, MAS has instructed StanChart's top brass to take disciplinary action against officers who failed to perform their duties effectively. A spokeswoman for the bank said: "We would like to highlight that these transactions are historical. We reported these transactions both before and at the time we exited the accounts in early 2013. "Standard Chartered has taken, and continues to take, remedial and disciplinary action where warranted. We have made significant investments in strengthening our controls, processes and surveillance systems, and continue to do so."

The bank will donate the profits from these transactions to charity, as its peers have done. MAS singled out Coutts for failing to check for "politically exposed persons" within its client base. The relationships with these clients were established between 2003 and 2009. Coutts International was sold to Union Bancaire Privee (UBP) in 2015, and is winding down its Singapore operations. UBP said it bought Coutts International's assets only, and "does not inherit Coutts' legal issues or liabilities".

MAS said: "The failure to exercise the necessary enhanced due diligence on these accounts was the result of actions or omissions of certain officers who have since left the bank." It referred to Yak Yew Chee and Yvonne Seah, both of whom left Coutts to join BSI Bank in 2009. Another former BSI banker Yeo Jiawei is now awaiting judgment over four charges of obstructing justice linked to "secret profits" earned illicitly from 1MDB flows.

BSI Bank, whose closure by MAS was the first since 1984, was the worst case of control lapses and gross misconduct in the history of Singapore's market, MAS said in May. It also fined BSI S$13.3 million.

The US Department of Justice (DOJ) claimed in July that more than US$3 billion had been allegedly misappropriated from 1MDB, and laundered through US financial institutions. Some US$700 million from the investment fund had been allegedly siphoned into Malaysian Prime Minister Najib Razak's personal bank account - a charge he has consistently denied. The DOJ referred to fund transfers to a "Malaysian Official 1".

The man in the eye of the storm is Malaysian businessman Jho Low, whose flamboyant lifestyle has recently been laid bare. Ex-BSI banker Yak, formerly Mr Low's banker, was jailed 18 weeks and fined S$24,000 in Singapore last month. His former BSI colleague Seah also faces charges of graft, forgery and failing to report information on suspicious transactions to the authorities. The latest news brings the total fines levelled by MAS at banks for dealing with 1MDB flows to S$27.5 million. MAS said it is nearing the end of its supervisory examinations of financial institutions in Singapore through which 1MDB-related fund flows took place. It will make a final update early next year.

Ravi Menon, managing director of MAS said: "MAS has taken tough regulatory actions against various financial institutions this year for AML control lapses. These actions send a strong signal that we will not tolerate the abuse of Singapore's financial system for illicit purposes.

"The supervisory investigations into the intricate web of international fund flows have been a learning experience for financial institutions as well as for MAS. Our financial sector will emerge cleaner and stronger from the lessons learnt."

Exxon to cut 14,000 from global workforce after energy slump

[TEXAS] Exxon Mobil plans to cut 1,900 jobs in Houston and other US locations as the oil titan struggles to conserve...

[PARIS] European women are at least 60 years away from winning equality with men and the pandemic could further slow...

[FRANKFURT] A coronavirus strain that emerged in Spain in June has spread across Europe and now makes up a large...