These are in line with global markets which continue to discount the Fed's move
Siow Li Senlisen@sph.com.sg@SiowLiSenBT
Prices of HSBC 4.7 per cent and StarHub 3.95 per cent also rose, to 100.98 and 100.71. Bonds are sold at 100 par.
PHOTO: ST FILE

LOCAL bonds rallied and key interest rates fell on Thursday as markets shrug off the second rate-hike this year by the US Federal Reserve.

Prices of recent perpetual issues sold this month have surged as much as 1.6 per cent. Prices of Sembcorp Industries 3.7 per cent and Lippo Malls Indonesia Retail Trust 6.6 per cent, both sold this week were quoted at 101 and 101.56 respectively on Thursday.

"The majority of SGD bonds are still trading firm after the rate hike, demonstrating the resilience of the SGD bond market despite a weaker performance in the Asian equity markets, he said.

The local bond rally and fall in interest rates are in line with global markets which continue to discount the Fed's move. James Cheo, Bank of Singapore investment strategist, said: "(Even) as the Fed raised rates, the markets don't believe it will continue doing so." 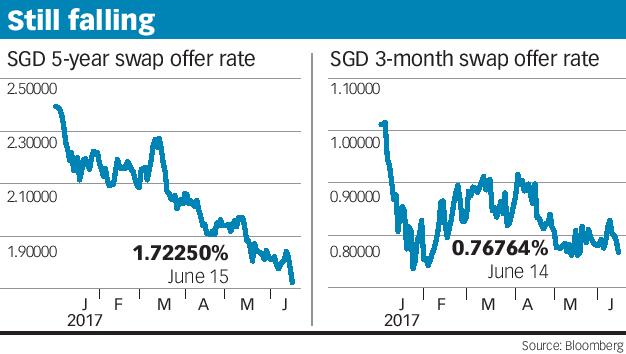 The Fed has said that it will hike once more this year, likely in September and signalled three-four more in 2018.

Markets are looking at inflation data and the view is that inflation will go down and stay subdued, said Mr Cheo. But the Fed is more optimistic and say it can ignore one or two months data, he said. The Fed expects the tight labour situation in the US, which is at all time low, to eventually push wages higher and ultimately inflation. In the meantime, SGD interest rates continue to fall.

The key three-month swap offer rate (SOR) fell to 0.76764 per cent on Wednesday, going back to mid-May levels. The five-year swap offer rate - a popular benchmark for local bonds - tumbled to a year-to-date low of 1.721 per cent on Thursday, down 66.4 basis points from the beginning of 2017. SORs are typically used to price commercial loans.

The three-month Sibor or Singapore interbank offer rate which is for pricing home loans was flat at 0.99455 per cent.

The tumbling interest rates is also due to the continued weakness in the US dollar (USD) against the Singdollar.

The USD has been extremely weak and USD/SGD dropped below 1.38 on the back of data misses for US retail sales and CPI (consumer price index) figures, said Eugene Leow, DBS Bank interest rate strategist.

"Notably, longer-term USD interest rates also held near their lows despite the Fed rate hike and affirmation that further hikes are in store," said Mr Leow.

The 10-year US Treasury (UST) fell to 2.14 per cent from 2.2 per cent after the Fed hike. "Taken together, the weak USD offset upward pressures on SORs that came from the Fed hike.

US mortgage defaults could pile up at pace that dwarfs 2008

[BOSTON] Mortgage lenders are preparing for the biggest wave of delinquencies in history. If the plan to buy time...

[BENGALURU] Australian shares gave up early gains to trade flat on Friday, as mounting fears of a deep global...

[BEIJING] China's services sector struggled to get back on its feet in March after a brutal month of unprecedented...

[TOKYO] Japan's services sector contracted at the fastest pace since the global financial crisis in March as a shock...