Turkish lira struggles in Asia but equities see some stability

[HONG KONG] Turkey's lira remained under pressure in Asian trade on Tuesday but markets in the region enjoyed a little more stability after the previous day's turmoil.

Nervous investors are keeping an eye on developments in Ankara after Monday's bloodletting that saw the lira hit record lows against the dollar and euro, and equity markets go into freefall on concerns Turkey's financial crisis could spread globally.

The crisis has been sparked by a series of issues including a faltering economy - the central bank has defied market calls for rate hikes - and tensions with the United States, which has hit Turkey with sanctions over its detention of an American pastor.

There was some optimism from news that Donald Trump's national security advisor John Bolton met Turkish Ambassador Serdar Kilic to discuss the detention of the pastor.

Traders remain nervous, though, and the central bank's announcement that it would provide lenders with liquidity and lower the amount of cash they needed to keep in reserve largely disappointed as it made no clear promise of rate hikes, which is what most economists say is needed.

Still, Ray Attrill, head of foreign-exchange strategy at National Australia Bank, was hopeful the crisis will not spread.

"It's a large local difficulty, but so far the contagion has been relatively limited, he told Bloomberg Television.

"We're seeing a little bit of signs of contagion within the eurozone, within the spreads of those government bonds in countries where the banking sector appears to have the biggest exposure as far as Turkey is concerned. You'd have to say that Turkey is relatively contained."

On equity markets Tokyo ended the morning 1.2 per cent higher as the safe haven yen eased against the dollar, providing some support to exporters.

Sydney added 0.8 per cent and Seoul was 0.1 per cent higher, with Wellington and Taipei also up.

Shanghai was flat but Hong Kong slipped 0.6 per cent.

Emerging market currencies, which took a battering Monday, also managed to eke out some gains, with South Korea's won up 0.1 per cent after losing almost one per cent against the dollar.

And the Russian ruble, Mexican peso and South African rand all climbed around 0.9 per cent.

There remain concerns about how the crisis will pan out, with Turkish President Tayyip Erdogan in combative mood, accusing the US of plotting against his country, and warning that unless Washington can "reverse this trend of unilateralism and disrespect" Turkey will "start looking for new friends and allies". 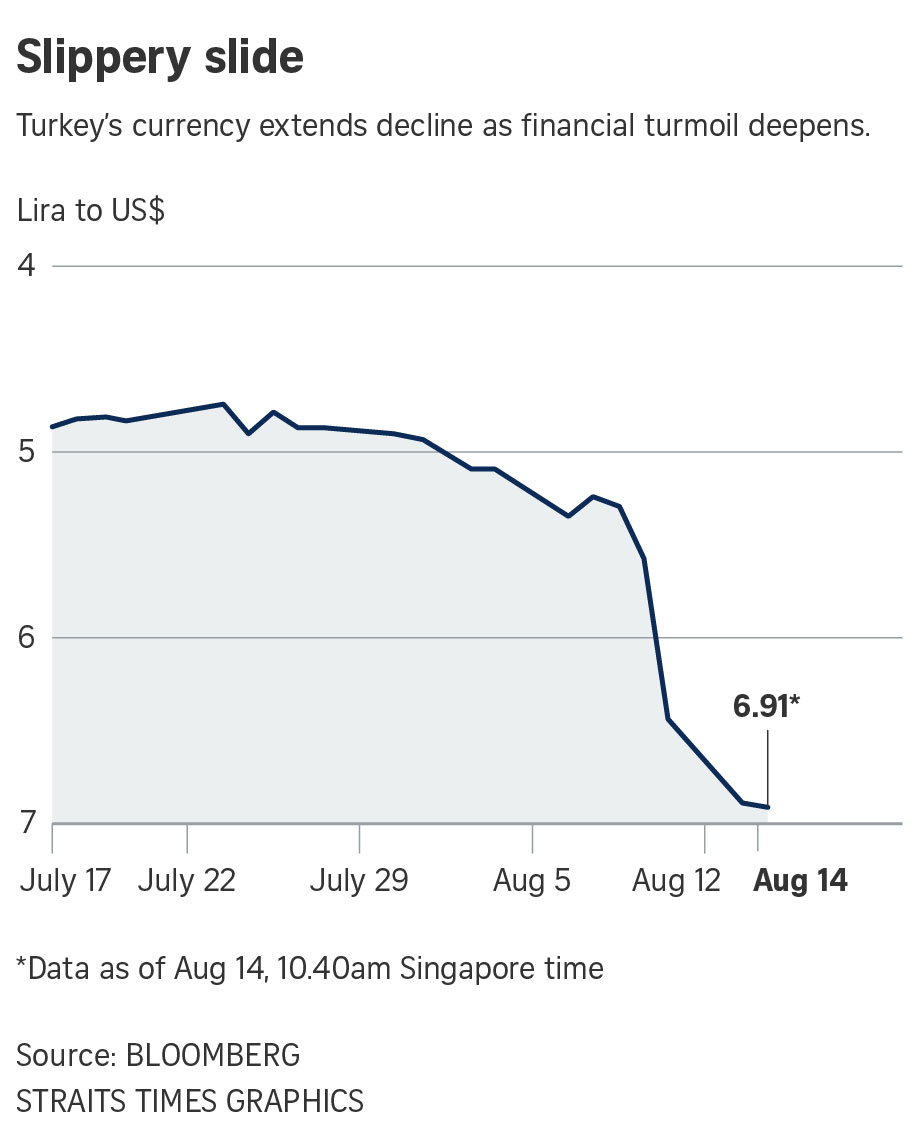 But for now analysts are broadly upbeat that Monday's plunge would not be repeated.

Greg McKenna, chief market strategist at AxiTrader said, Monday "could have been a much bigger day on forex markets than what we have seen", he said in a note.

"Sure the lira got dumped, then pumped, then dumped again. Sure, the rand and Mexican peso went along for the ride - or at least a little of it. And certainly, (the dollar-yen) yesterday looked as if the funk was really about to begin. But then it didn't."

And Kengo Suzuki and other forex strategists at Mizuho Securities added: "Excessive risk avoidance is likely to recede (on Tuesday) with a lull in the Turkish lira's plunge, but a wait-and-see mood will remain strong."