The Singapore government will auction off the rights to buy 41 per cent more cars in the May-to-July period than in the preceding three months. That is a lot of supply to hit the vehicle market, but we may not have seen the end of it.

The supply of new vehicles in Singapore is determined by the vehicle quota system. Depending on how many vehicles have left the market and the size of the total vehicle population at the end of the latest year, the Singapore government will auction off a certain amount of certificates of entitlement (COE) every couple of weeks such that the overall population of vehicles will not grow beyond a predetermined rate. The current allowed annual vehicle population growth rate is 0.25 per cent.

The single largest determinant of how many COEs the government can release is deregistration of old COEs in the last three months. When a car is scrapped or somehow taken out of the vehicle population, its COE is deregistered, and that allows the government to add one COE to the next round of auctions.

Each COE lasts for up to 10 years. Car owners are therefore incentivised to scrap a new car before it is 10 years old, because otherwise the car owner would have to pay for a brand new COE on an old vehicle that may not last for another decade.

Something interesting has been happening over the past several years. From 2005 to about 2008, the attrition rate of cars between 5- and 9-years-old was around 50 per cent. In other words, car owners were scrapping their cars well ahead of the 10-year expiration of their COEs. But that pattern broke down around 2009. From 2009 onwards, car owners started to hold on to their cars for longer, and so the attrition of cars fell sharply for cars that were younger than 10 years.

This chart shows how many cars of a certain age from the previous year were taken off the roads by the time the current year arrives. 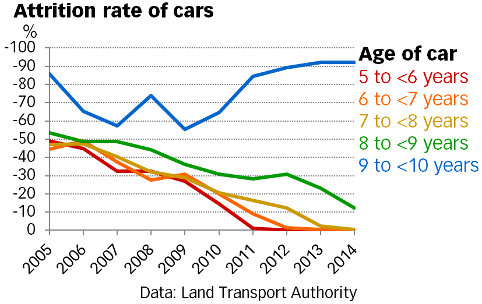 When fewer cars are taken off the road each year, the population of older cars will necessarily grow. If we look at the population of cars by age, the impact becomes clear. The large number of 5-year-old cars that used to be halved by the time they became 6-year-old cars are now almost all moving on to the next year. And so a huge wave of cars are staying around year after year. A tsunami of cars. 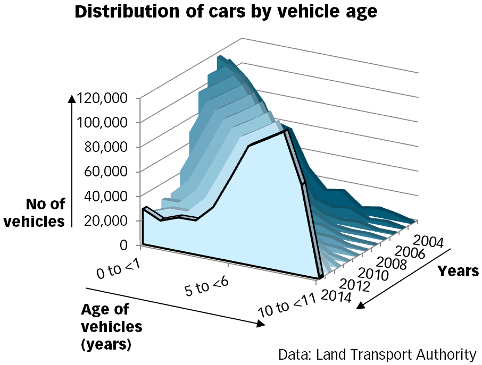 The population of older cars could presumably keep growing for many years if not for the 10-year expiry of a COE. What that means is that surge of cars that are coming to 10-years-old in 2014 are almost all going to be deregistered. And in terms of sheer numbers, the peak of populations in 2014 were the 7- to 9-year-old cars, meaning that we could see even more deregistrations in 2016 and 2017 if current attrition rates hold constant.

Whether car owners will continue to hold on to their cars for the full 10 years remains to be seen. An owner of a 7-year-old car could opportunistically scrap the car this year and try to get a new one on the hopes that the glut of new COEs will keep COE premiums low. However, the demand side of the equation could scale up with supply and keep COE premiums high, especially if deregistering car owners are mostly keen on replacing their dereigstered cars instead of switching to public transport.