1-in-4 SGX listed companies in the red; total profits down 19%

'Earnings recession' could spill over into first quarter 2019 amid trade war, says DBS
Anita Gabrielanitag@sph.com.sg@AnitaGabrielBT
Singapore's latest earnings season is tapering off with over 300 companies having given investors the chance to do a reality check.
PHOTO: THE BUSINESS TIMES

SINGAPORE's latest earnings season is tapering off with over 300 companies having given investors the chance to do a reality check.

The verdict so far: one in four companies was in the red, according to data compiled by The Business Times, and overall, total earnings of almost S$40 billion were down 19 per cent. The big downers include telcos and commodities, with risk aversion amid a slowing global economy and trade war fears taking a toll on many corporates.

Among the 30 Singapore Exchange heavyweights that make up the Straits Times Index, there were as many misses as there were hits.

"Broadly, the earnings season had been rather sluggish for the local market, a trend cutting across the region," said IG Markets' Jingyi Pan.

As of last Friday evening, 336 SGX companies have issued report cards for the full year ended December 2018. BT's computation showed that among those in the black, more pared their profit than raised it - 115 vs 105.

Of those mired in losses, 24 sank deeper into the red while 33 posted smaller losses. A total of 29 companies swung back to earnings from losses, while 27 suffered a reverse fate.

Its prognosis is even less cheerful: "We maintain our view that the earnings recession trend will extend for another quarter into first quarter FY2019 given the US-China trade uncertainties, before it ends." 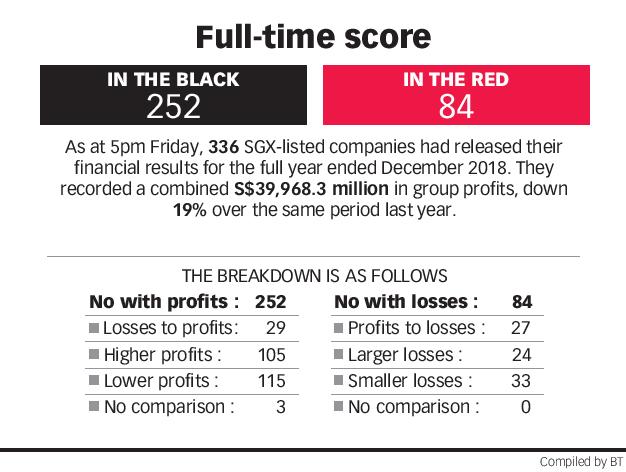 There has been some optimism of late as the world's two largest economies reach the finish line of a trade deal but analysts say uncertainties still abound.

Telcos were hurt by intense competition and rising costs, with both StarHub and M1 slashing dividend payouts in light of further earnings weakness. The view for Singtel was downbeat with a pallid third quarter. Analysts believe things could get gloomier for the incumbents with the entry of Australian telco TPG, which could pile more pressure on the telcos' average revenue per user (ARPU).

After drowning in the red for three quarters, Sembcorp Marine turned around for the final quarter with its full-year net loss of S$74 million beating analyst estimates, thanks to a surprise pick-up in the marine business.

That has imbued a little hope for the battered offshore and marine (O&M) space. But CMC's Ms Yang cautioned that while the "industrial group sees early sign of bottoming out in the O&M sector... a full turnaround is yet to come amid persistent supply-demand imbalances in offshore drilling segment".

In the consumer space, Dairy Farm International's 2018 results were hit by hefty one-offs largely attributed to its Southeast Asian grocery store business. While the company has in place a transformation plan, analysts are not holding their breath as they reckon it would take more time before the regional operations see some light.

The bulk of the S-Reits outperformance was due to one-off gains, said CGS-CIMB Research, referring to Ascott Residence Trust, CDL Hospitality Trust and CapitaLand Mall Trust, while it added that Parkway Life Reit and OUE Commercial Reit posted organic improvements in occupancy and operating performance.

Weak crude palm oil prices and downstream margins hurt Golden Agri-Resources which incurred a full-year net loss while Wilmar International benefited from higher margins from oilseeds. Wilmar is analysts' top pick among plantation companies, partly because of the imminent listing of its China business in Shanghai.

What does all this mean for the STI, which has closed two straight months with gains? There may be some upside since it has come off by some 1.6 per cent from its February high of 3,286 points.

Furthermore, DBS expects the upcoming April-May ex-dividend period to attract some bargain hunters. The house added that barring a negative turn in the macro backdrop, 3,500 by year end under its bull case scenario remains a possible outcome.