CEO pay at Singapore-listed firms not aligned with performance: study

Korn Ferry Hay finds that only 11% of 541 listed companies use rewards such as share options to tie pay to company performance
Siow Li Senlisen@sph.com.sg@SiowLiSenBT
The link between what Singapore chief executives are paid and the profitability of their company is tenuous, a study has found. It has emerged that some CEOs still receive bonuses when their companies are in the red, or are paid fatter bonuses even when the company's profits have shrunk.
PHOTO: ST FILE

THE link between what Singapore chief executives are paid and the profitability of their company is tenuous, a study has found. It has emerged that some CEOs still receive bonuses when their companies are in the red, or are paid fatter bonuses even when the company's profits have shrunk.

In a damning study on the practice of paying Singapore CEOs according to their performance, Korn Ferry Hay noted that long-term incentives (LTIs) - in the form of share options and performance shares plans, for example - do not form a major component of CEOs' compensation packages; only 11 per cent of 541 Singapore-listed companies polled rewarded their top executives with LTIs in FY2016.

"Pay-for-performance alignment between a CEO's pay and the company's profitability continues to be an issue," said the management consultancy in a report on Wednesday.

Its study surveyed the pay of the top executives of the 541 companies that had filed their annual reports between May 1, 2016 and April 30 this year. The companies were drawn from nine major sectors - commerce, construction, finance, hotels/restaurants, manufacturing, multi-industry, properties, transportation/storage/communication and others.

And a third (32 per cent) of the companies that paid out bonuses in FY2016 rewarded their CEOs with bigger bonuses than in FY2015, when the company had in fact been less profitable than in FY2015, said Korn Ferry Hay. 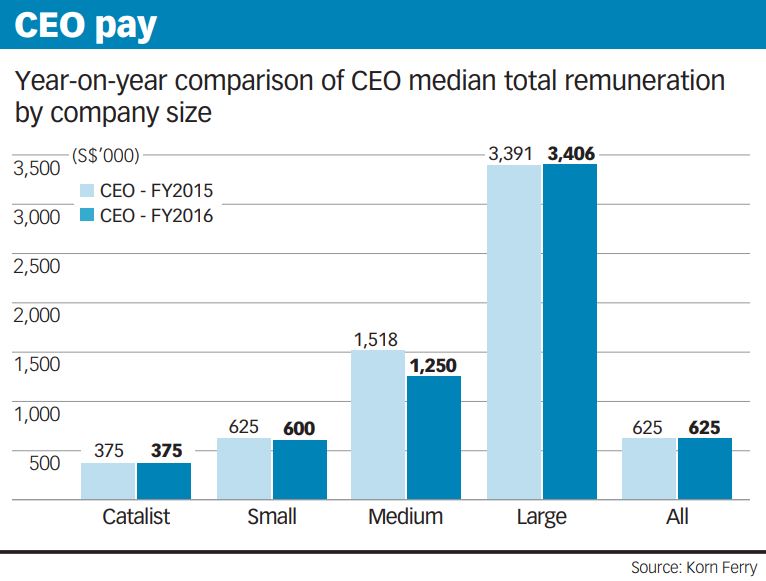 The culture is radically different in the US, where LTIs account for 66 per cent of a CEO's pay package.

A study of CEO compensation at the 300 largest US-listed companies (which had filed their proxy statements for the year ended April 30, 2017) found that total direct compensation - the sum of salary, bonus, and grant-date fair-value of LTIs - rose by 4.2 per cent over the year before to a total of US$12.5 million.

But it is noteworthy that the increase came almost entirely from a 4.4 per cent rise in the grant-date fair-value of LTIs.

Base salaries had risen by only 0.8 per cent, and annual incentives were flat over that period.

Among the 11 per cent of the 541 Singapore companies that rewarded their top executives with LTI plans in FY 2016, large companies led the way in the utilisation of LTI pay (68.8 percent). They were followed by medium-sized companies at 19 per cent, small companies at 5.2 per cent and Catalist companies at 6.2 per cent.

As has been the case for the last five years, Korn Ferry Hay found that the property sector continued to have the highest median CEO pay, at S$1.5 million, followed by the multi-industry sector (S$1.33 million) and finance (S$1.22 million).

The management consultancy observed that in US publicly-listed firms, "the input of (and the engagement by companies with) large shareholders, proxy advisory firms, and various stakeholders has resulted in a focus on "pay for performance".

Erman Tan, president of the Singapore Human Resources Institute, said: "You have to understand that shareholders' participation (in Singapore) is not as active as in the US."

The US corporate culture where CEOs are rewarded based on share performance is well developed. The shareholder community in Singapore, on the other hand, does not monitor CEOs' pay; nor is it as sophisticated as in the US, he added.

Shareholders here tend to leave it to the board of directors to oversee the company, in the belief that they will do a good job. There is no external drive to change the situation, said Mr Tan. Directors here do not face probing questions, he said.

Korn Ferry Hay's Mr Goh said having an LTI plan is thus a way of sending the message that top executives must balance both the company's short- and long-term sustainability.

"A well designed remuneration structure with executive pay having some resemblance to what shareholders will get out of their investment should be able to motivate executives to take action."

IN one fell swoop, Asian equity markets are awash with deeper hues of red on Friday after Wall Street was dealt its...

NETLINK NBN Trust and a vendor on Thursday agreed to mutually discharge a project contract following multiple and...

[TOKYO] The International Olympic Committee is "fully committed" to holding the 2020 Games in Tokyo as planned...

[TOKYO] Japan on Friday said it would send a deputy justice minister to Lebanon after failed attempts to get former...

[TOKYO] The operator of Tokyo's two Disney resorts, Disneyland and DisneySea, said on Friday the parks would be...