S$110m deal a big boost for Singapore's largest bank, which is already among the top five private banks in Asia
Jamie Lee leejamie@sph.com.sg@JamieLeeBT
It was definitely not a case of Monday blues when DBS scored a coup by snapping up most of ANZ's wealth and retail business in Asia for a compelling price of S$110 million.
ST PHOTO

IT was definitely not a case of Monday blues when DBS scored a coup by snapping up most of ANZ's wealth and retail business in Asia for a compelling price of S$110 million.

The announcement by the rising star in Asian wealth management followed several months of exclusive talks with the Australian bank, which is known for its trademark blue hues. ANZ is on a deadline to exit a profitable business that while generating S$825 million in revenue in fiscal 2016, remains uncompetitive for a bank that lacks scale in this fiercely fought space and needs to shore up capital.

In shelling out S$110 million, DBS will snag S$23 billion of assets under management (AUMs) from ANZ's wealth business, mostly out of Singapore and Hong Kong. This means it paid just about 0.5 per cent of the assets. For Societe Generale's private banking business in Asia, DBS had paid 1.75 per cent of the asset base.

DBS is tapping into ANZ's mass affluent pool, which makes up about 75 per cent of the AUMs.

While the mass affluent business is typically more expensive to run than a private banking business because of the bigger branch network needed, this acquisition will allow DBS - Singapore's largest bank - to ramp up its wealth asset base in the rapidly growing region without taking up a lot more branches, said DBS's CEO Piyush Gupta at a media session held right after the bank's results briefing.

"Yes, we're all consumed by offshore and marine challenges. That is true. But that does not have material bearing on the fact that the wealth business in Asia continues to grow very steadily." 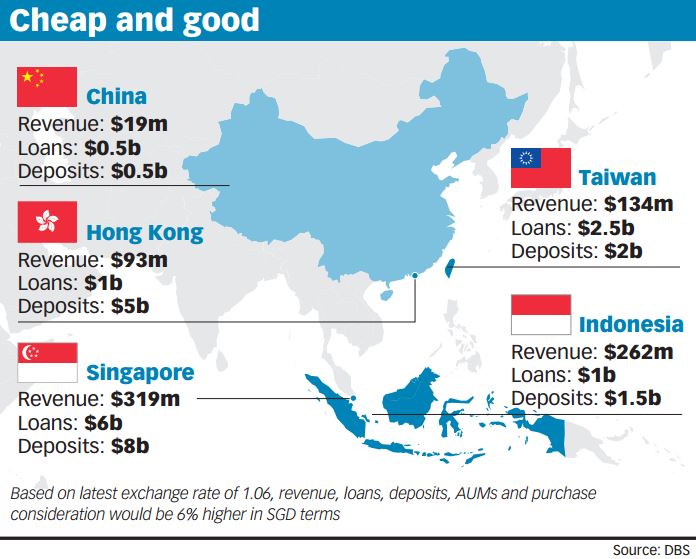 DBS would hope to keep the same strong retention rates that it experienced with previous acquisitions, with Tan Su Shan, group head of consumer banking and wealth management at DBS, noting that the productivity of relationship managers, revenue per customer, and stickiness of customers have all surpassed expectations for earlier deals.

DBS hopes to take in some 570 relationship managers, including all of them in Singapore and Hong Kong.

The bank, now ranked among the top five private banks in Asia, remains among those rumoured to be eying a potential sale by ABN Amro of its private banking business in Asia.

Mr Gupta would not comment on the ABN Amro deal, but said that "the economics must make sense".

"We don't do deals for glory. We don't want to be big for the sake of being big."

Even so, the bank's wealth management business has already quadrupled revenue over the last five years. DBS's third-quarter results were fuelled by a record showing in income from wealth management, surging 47 per cent to S$201 million from a year ago. The ANZ acquisition should bring DBS's total wealth AUM base to S$182 billion in Asia.

The deal will have DBS take over about 30 branches, mainly in Indonesia and Taiwan. DBS will, in time, "optimise" the network.

The access to nearly one million ANZ retail customers in Indonesia and Taiwan will help the bank to scale up with speed in the two markets, especially as DBS looks to launch its digital bank in Indonesia this year. While Taiwan is an admittedly competitive market, the acquisition could improve the return on capital for that market given the newfound scale, said Mr Gupta.

The assets acquired make up the bulk of ANZ's wealth business in Asia, said David Hisco, ANZ's group executive for the bank's Asia retail and wealth business, at the briefing.

"I'm pleased to say DBS was our first choice. We went back to look at who had a good overlap, who did we think had the skills and capability to do this transaction, what did we think will be a good outcome for our customers and our staff. And that all pointed to talking to DBS," he said.

"We really didn't have a lot of time to talk to others," he added.

The ANZ deal is also attractive for a self-funded loan book. DBS will take S$11 billion of loans once financed by ANZ, as well as S$17 billion in total deposits owed to former ANZ customers. The impact on capital will be minimal, said Mr Gupta.

ANZ will take a net loss of about A$265 million (S$280.6 million) for the sale, which would include writedowns for software, goodwill and fixed assets, as well as transaction costs, it said in a separate statement. ANZ said it will focus on running an institutional business in Asia.

The sale is expected to boost ANZ's Tier 1 common capital ratio by about 15-20 basis points. The transaction should close by early 2018.

Shares of DBS finished higher at S$15 on Monday, up 10 cents.