Surprisingly good 2017 economy boosted optimism, but low-hanging fruit have been picked, warn market watchers
Marissa Leemarilee@sph.com.sg@MarissaLeeBT
DBS proposed a huge jump in dividend payout for the period and pledged to pay S$1.20 per share in annual dividends from this year on - double its payout in three of the past four years.
PHOTO: BLOOMBERG

CORPORATE earnings have rolled in pretty much according to script this reporting season, though that's not stopped some big boys from swinging out the cash sack and running down main street doling out dividends which has fired up their shares.

A case in point is DBS Group, which delivered 2017 earnings exactly in line with consensus forecasts as net interest income rose while total allowances halved. On the back of record profits, the largest bank in Southeast Asia proposed a huge jump in dividend payout for the period and pledged to pay S$1.20 per share in annual dividends from this year on - double its payout in three of the past four years.

OCBC Bank and United Overseas Bank also matched expectations with their results but without a DBS-like sweetener which signalled they were keeping it conservative. Their shares tumbled after their results last Wednesday. This was despite UOB raising its full-year 2017 dividend payout.

CapitaLand also flashed a set of in-line results. It tapped on its large recurring income base to hike 2017 dividend payout by 20 per cent to 12 Singapore cents a share - a nice surprise even to those who wondered if CapitaLand's purchase of Pearl Bank Apartments so late into the en-bloc cycle was the savviest move.

As a whole, earnings have been a mixed bag for Singapore stocks. 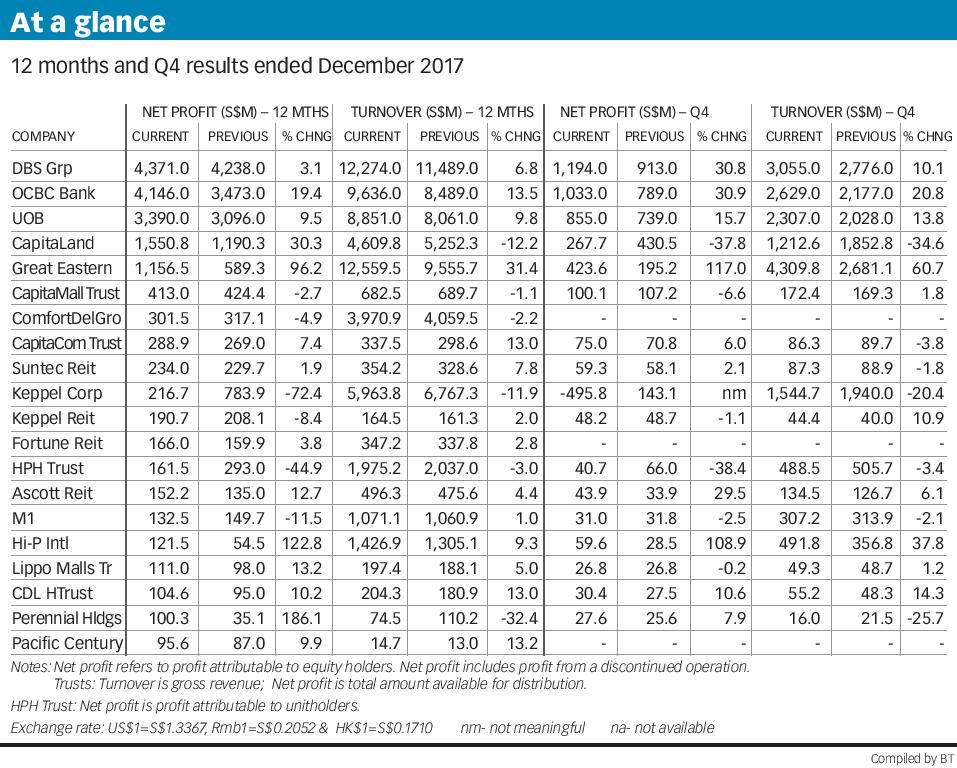 KGI Securities Singapore head of research Joel Ng told The Business Times: "If you listen in to earnings and management discussions, the tone has shifted to positive expectations for 2018 on healthy macro trends. (But) most of the low hanging fruits are gone. We could potentially see higher risk of earnings misses going into the second half this year given the higher base in 2017."

Notably, Singapore Airlines blew past earnings expectations for the third quarter on the back of positive tailwinds in air travel growth which saw its share price take off.

Other pleasant surprises have been sector-specific.

The manufacturing tech sector is churning out a good batch of results, with the rare exception of Micro-Mechanics, which missed expectations despite growing both revenue and earnings.

Valuetronics and Hi-P International both sustained earnings momentum in their latest quarters.

Hi-P also dished out higher dividends, but jitters over the sudden departure of its chief operating officer, who was key in building relationships with non-Apple clients, pushed its shares lower.

Venture Corp, which reports on Feb 28, is unanimously the market's darling.

UOB Kay Hian head of research Andrew Chow told BT: "I'm really rooting for Venture which is likely to report a strong fourth quarter. They received a massive re-rating after their third quarter results but they only pay dividends once a year so everyone will be watching."

Hopes are also high for AEM Holdings, which issued a positive profit guidance ahead of fourth quarter results, and hinted at a bonus share issuance. 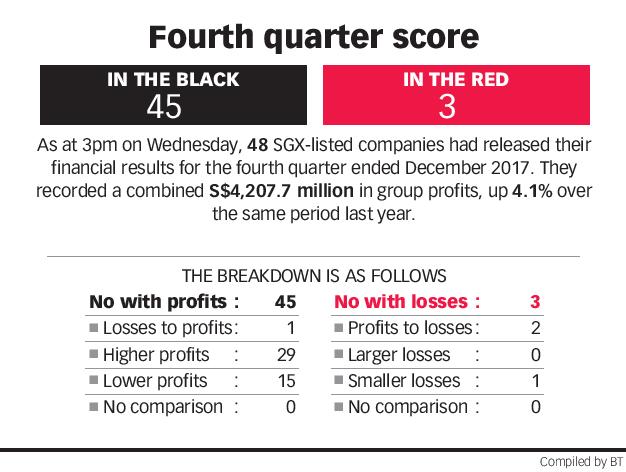 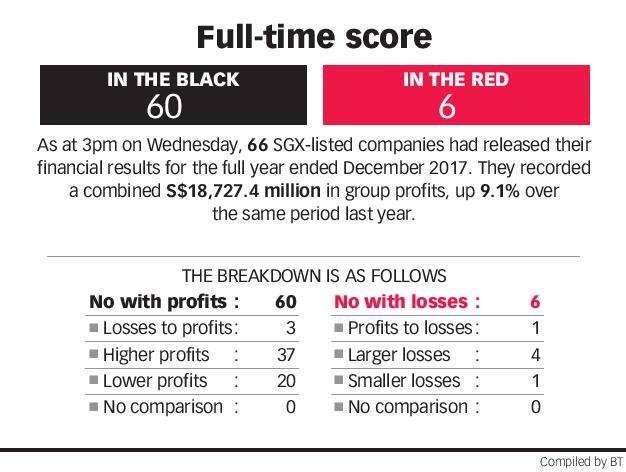 RHB research head for small-mid caps in Singapore Jarick Seet noted: "Most of them have a three-month product cycle because customers give orders only three months in advance, except for AEM which builds equipment to order. For Valuetronics, automotive orders are also more stable - they don't differ a lot from year to year as the number of vehicles doesn't shrink very widely.

Other companies that have signalled increasing confidence include Health Management International, which declared an interim dividend and adopted a new dividend policy as second quarter earnings nearly tripled after it assumed full ownership of two hospitals in Malaysia.

Elsewhere, No Signboard Holdings gave itself a pat on the back for its successful listing last year with a special dividend of 0.31 Singapore cent per share.

As for property stocks, analysts noted that most new project launches from the recent spate of en-blocs would only take place in the second half of the year.

Mr Seet said: "The share-price re-rating last year was a closing of the gap in discount to developers' RNAV (revalued net asset value), rather than profits. At the end of the day, they must show they can sell their projects well and reinvest the cash."

UOB Kay Hian's Mr Chow added: "For now, we'll be looking at their guidance and their landbanks."

Mr Chow begs to differ: "I don't think valuations are expensive or high. If you look at mean valuations - we are actually not expensive.

Stronger recovery awaits F&B firms that act now, 'do not wait for Covid to blow over': Chan Chun Sing

FOOD and beverage (F&B) firms that have acted to transform their businesses - without waiting for pre-Covid 19...

THE High Court has granted an extension of moratoria for offshore marine services firm Pacific Radiance and its...

Yangzijiang gets new orders for nine vessels worth US$226 million

YANGZIJIANG Shipbuilding on Monday said it has signed agreements to build and deliver nine vessels worth about US$...

STI ends the day down 1.75%, but chalks strongest monthly price gain since 2009