Giant tech stocks and defensive businesses still in favour, even as investors keep an eye on North Korea and central banks' next moves
Cai Haoxianghaoxiang@sph.com.sg@HaoxiangCaiBT
September is approaching, with its reputation as the worst month in history for US stocks, which lead sentiment in Asia. Yet many money managers continue to dance.
PHOTO: REUTERS

SEPTEMBER is approaching, with its reputation as the worst month in history for US stocks, which lead sentiment in Asia. Yet many money managers continue to dance.

Corporate performance has been broadly satisfactory in the second quarter, and stock market valuations are still justified, they tell The Business Times.

In Asia, bond managers like it that inflation remains low, even as economies are growing and restructuring. The only risks cited, if at all, are coordinated central bank tightening and an escalation of tensions over North Korea.

US Fed to keep interest rates near zero, with eye on inflation

He has rotated out of companies like a Taiwanese electronics manufacturer. "My incremental dollar is going into defensive growth names," said Mr Crown, whose strategy has assets under management of US$6 billion.

He is also studying sectors being disrupted. This includes a major US retail real estate investment trust (Reit) as well as a US air-conditioning distributor. Malls driven by grocery stores perform better than malls anchored by department stores, he said.

For distributors, he said, providing servicing makes such companies less likely to be disrupted by giant e-commerce retailers like Amazon. 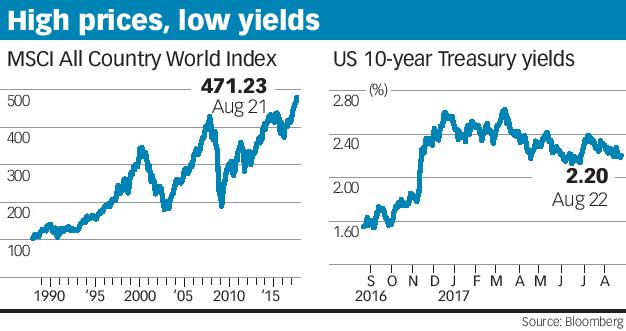 Adam Schor, director of global equity strategies at Janus Henderson Investors, said many portfolios at the firm still hold tech stocks like Alphabet, the parent company of search giant Google, as well as social media stock Facebook. The rally in tech stocks is more reflective of their strong business models, he argued.

He told BT he does not think the market is wildly expensive. "People forget how deep we were in the financial crisis and how slow things were till we recovered," he said.

Other than tech, Mr Schor likes healthcare stocks, which benefit from an ageing population. He is biased towards riskier biotech stocks, which he admits will trade lower than the market should a risk-off scenario occur. "Risk aversion, I hope, is behind us ... the things we're talking about are long-term trends," he said.

The risk of North Korea and nuclear catastrophe is ever present. Annual joint military drills between the US and South Korea began this week, but with tensions easing recently, most analysts do not expect a serious market impact.

Dave Lafferty, global chief strategist of Natixis Global Asset Management, said in an Aug 18 note that investors can expect the North Korea situation to return to the "uneasy status quo" that has prevailed for several years.

However, Deutsche Bank Wealth Management said in weekly bulletin last week that the isolated nation remains an immediate geopolitical threat. It appears to now possess both nuclear weapons and long-range missiles to deploy them, said Tuan Huynh, the firm's chief investment officer for the Asia-Pacific.

"A full-blown crisis would pose downside risks to trade, as South Korea is an important trade link in many global supply chains. It is also a major exporter of electronics and automobiles," Deutsche Bank said.

"However, should Korean tensions be reduced, Asian equities are likely to be helped by strong economic fundamentals, ongoing reforms, regional trade cooperation and robust consumption."

HSBC Global Asset Management (Hong Kong) Limited's head of Asian rates and foreign exchange (FX) Gordon Rodrigues, who was in town to promote an Indian debt fund, told BT last week that the appreciation of most Asian currencies against the US dollar has helped contain imported inflation. "Economies are doing well but not overheating in any shape or form ... so we've been in a sweet spot in the last seven months," he said.

Stuart Ritson, Aviva Investors head of Asian rates and FX, told BT on Tuesday that global growth is picking up and the market still expects central banks to add to their balance sheets, albeit at a slower rate. In the region, money inflows are exceptionally strong and emerging-market currencies are slightly cheaper versus history, based on real effective exchange rate models.

"We are positive on the market, but it appears to be quite a consensus position . .. It doesn't mean we're wrong, but it's something to be aware of," said Mr Ritson, who manages US$3.5 billion in emerging-market local currency sovereign bonds.

However, the outsized influence of central banks on financial markets continue to be cited as risks.

ING Bank chief economist and head of research Asia-Pacific Robert Carnell said in an Aug 16 briefing that a key risk is around the European Central Bank (ECB) either tightening too much, or waiting too long before doing so.

Easy money is still distorting financial markets and not contributing to real economic demand, he said. There is a risk of a European taper tantrum if the ECB tapers too much, setting off trade unwinds in bonds that can spill over to other markets, he said. Bears continue to prowl. Citi global head of credit products strategy Matt King said in an Aug 11 note that he is expecting another "taper tantrum".

BMI Research, a unit of Fitch Group, warned in a note last week that high-yield corporate bonds in Europe and the US and Europe face major risks due to extremely low yields and near-record leverage.

US stocks have also peaked, BMI said. "The five factors we track - trend, market breadth, sentiment and positioning, valuations, and fundamentals, are all flashing red," it said.

In China, there might be a mild growth slowdown in the second half, said Aidan Yao, senior emerging Asia economist at AXA Investment Managers in an Aug 14 note.

This is due to policy tightening for the housing market and shadow banking, combined with a moderation in export growth, he said.

Yet it remains hard for financial market participants to turn fully bearish. CIMB Research, for instance, said in an Aug 16 Singapore strategy note to "dance while the music is on" in the property, tech and gaming sectors.

Property and tech stocks have performed well this year, but are still less overpriced than others, CIMB said. However, it does not favour transport firms and telcos.

Nikko Asset Management head of Asian equity Peter Sartori said in an Aug 15 briefing that he is looking at Chinese banks for the first time.

"It looks interesting, with high returns on equity, dividend yield, low valuations as the market has not believed it ... there is some value, some growth potentially," he said.

"I don't understand funds that can go up to 20 per cent in cash," he said.

"Investors are investing in a fund because they want to have exposure to equities. If they want to be in cash, that's their decision to make."

SINGAPORE'S core inflation in August eased slightly from its decade-low point in July but remained in negative...

[KUALA LUMPUR] Malaysia's consumer price index (CPI) fell for the sixth month in a row in August, declining 1.4 per...

[CHICAGO] Walmart will recruit more than 20,000 workers ahead of the US holidays to prepare for an expected surge in...