Mergers and acquisitions up in 2019 but deal sizes are shrinking

"Bigger is better" will remain a key theme in 2020, though some expect M&A activity to stabilise or cool
Marissa Leemarilee@sph.com.sg@MarissaLeeBT
Merger and acquisition (M&A) activity picked up at a fierce pace in 2019 as Reits raced to merge while a bumper crop of small and mid-cap firms got swept into the privatisation wave.
PHOTO: BLOOMBERG

MERGER and acquisition (M&A) activity picked up at a fierce pace in 2019 as Reits raced to merge while a bumper crop of small and mid-cap firms got swept into the privatisation wave.

Among those companies that received buyout offers this year, a dozen have already left the Singapore Exchange or are very near to it.

But now that the best targets have been picked off by private equity while second-liners are seeing their valuations tick up as animal spirits return to risk-on mode, privatisation momentum could cool a little in 2020, analysts said.

John Cheong, head of small and mid-cap research at UOB Kay Hian, told The Business Times: "It depends on the overall market. The reason companies choose privatisation is because they think they are too undervalued. Recently, I've seen that some of these small-caps, their share price has started to move up so if this continues, maybe we can see fewer delistings."

The FTSE ST Small Cap Index of stocks with a market cap below S$3 billion came off a 10-year low last December and is up 8.6 per cent so far this year.

A total of 35 exit offers and partial offers were launched for Singapore-listed companies in 2019, up from 14 last year, Mr Cheong noted. "The increasing number of privatisations this year may also have driven people to pay more attention to smaller caps."

For instance, shareholders in fastener supplier PS Group got a cash offer in August that was close to three times the stock's last transacted price, although relatively speaking that was a tiny takeover that valued PS Group at just S$8 million.

Outside of the three Reit mega-mergers engineered by OUE, CapitaLand and Frasers Property, this year's deals leaned on the small side with the largest being Temasek's partial offer for Keppel Corp, followed by Yanlord Land's general offer for United Engineers (UE).

Citic Envirotech is being valued at S$1.3 billion in a privatisation bid by its parent launched last month. All the other delistings launched this year were for companies with a sub-S$1 billion market cap.

That's a step down from last year, when big names like Wheelock Properties, M1, Keppel Telecommunications & Transportation got delisted. 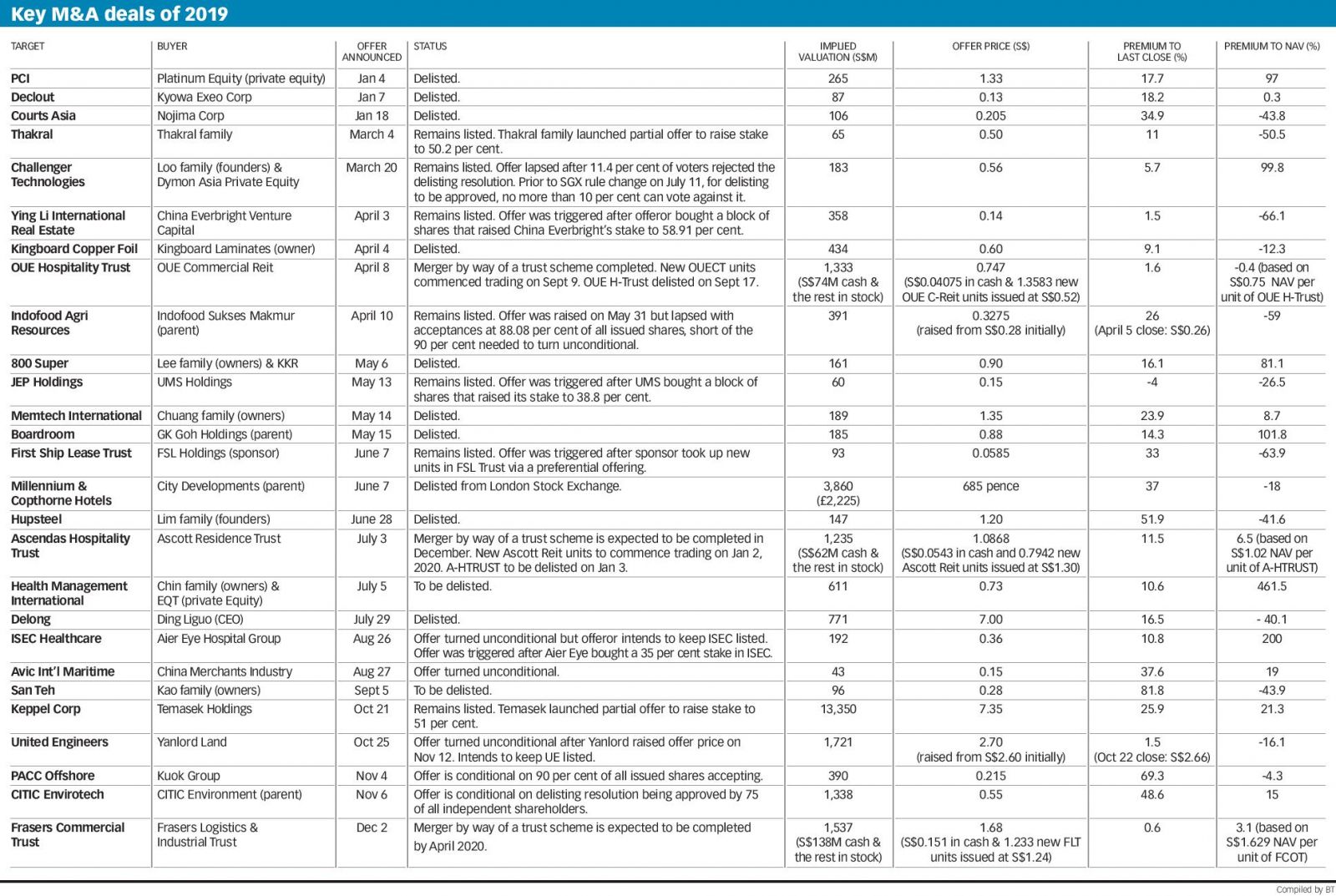 Liu Jinshu, director of research at Tayrona Financial, thinks there are still a lot of push factors that are motivating companies to delist, like thin trading liquidity.

"However, you need certain factors to be there before companies pull the trigger," he said, and chief among them is a source of funding.

But private equity is also selective about who they back, Mr Liu said: "Generally, private equity funds have a return threshold of 15 to 20 per cent and generally they like companies with strong cash flows. It's not easy to find such companies."

The rising tide of shareholder activism also put a thorn in the side of some towkays this year, with minority shareholders blocking the exit of consumer electronics retailer Challenger Technologies and Indofood Agri Resources.

In June, the Loo family and Dymon Asia's delisting bid for Challenger was blocked by a "no" vote from dissenting shareholders led by Pangolin Investment Management. The deal had been a tough sell from the start - The Edge even took the unusual step of publishing a template letter that it urged minority shareholders who oppose the deal to send to Challenger's board of directors.

The deal was scuppered but Challenger ultimately reminded everyone who's boss by declaring an interim dividend of zero in August, instead of the 1.1 Singapore cents per share doled out in prior years. The electronics retailer has no formal dividend policy and the board felt it would be "prudent to defer any decision on dividends till the end of the financial year", Challenger said.

The independent financial adviser had deemed the offer "not fair but reasonable", analysts recommended investors accept the offer, while some vocal minority shareholders agitated against what they felt was another privatisation on the cheap.

Indofood Agri shares still trade above the lapsed offer price, though the agribusiness group's losses have widened over the last two quarters.

The latest deal to set tongues wagging was Yanlord's mandatory general offer for UE in October. To be sure, Yanlord has stressed that it does not intend to privatise UE. Still, some investors felt that Yanlord was consolidating its hold over UE at a bargain.

In July, the board of UE, led by executive chairman Zhong Sheng Jian who is also the boss of Yanlord, decided to place out all of UE's treasury shares - equivalent to a 3.41 per cent stake in UE - to third parties at S$2.58 apiece. Yanlord later raised its offer for UE to S$2.70 after buying up a 6.15 per cent stake in UE from multiple accounts aggregated by a broker.

As one minority shareholder noted in an open letter to the UE board last month, UE shareholders effectively lost out on S$2.6 million that UE would have gained if it had sold its treasury shares directly to Yanlord: "Can the UE board explain this decision and clarify whether the third party (buyers of the treasury shares) sold the stake to Yanlord?" The letter was ignored by UE, Yanlord and the regulators.

Meanwhile, the hunt for undervalued companies will go on.

Havard Chi, portfolio manager of Quarz Capital Management, believes that the "bigger is better theme" will remain in play next year.

"A lot of Singapore-listed companies are cash rich and the forecasted lower-for-longer interest rate environment which increases their asset values will only increase the undervaluation if they own factories and offices in Singapore, for example," he said.

"The trade war has also pushed a lot of Chinese companies to look at Singapore companies which could complement their operations," he noted. "Rather than build up their own greenfield production facility in South-east Asia, a full or partial takeover offers them a quick alternative to ramp up their production capabilities and divert some of their existing clients and production to South-east Asia. We may see more of these deals completed in the next year due to the time required for the due diligence process."

A 999-year leasehold shophouse in Amoy Street has been launched for sale with a guide price of at least S$9 million...

[RIYADH] Saudi Arabia sold its first Eurobond of the year on Tuesday as tension in the Middle East eased over the US...