Vivienne Tayvtay@sph.com.sg@VivienneTayBT
OCBC Bank posted a first quarter net profit of S$1.23 billion for the three months ended March 31, up 11 per cent from S$1.11 billion a year ago.
PHOTO: REUTERS

OCBC Bank beat market estimates with an 11 per cent rise in first quarter net profit to $1.23 billion from $1.11 billion a year ago, driven by broad-based growth.

Net profit beat the $1.16 billion average estimate of five analysts, according to data from Refinitiv.

Singapore's second-biggest listed lender saw growth across its banking, wealth management and insurance franchise, it said in a regulatory filing on Friday.

Earnings per share came in at 28.3 Singapore cents, up from 26.3 cents the year prior. No interim dividend was declared for the quarter as the bank pays dividend on a semi-annual basis, it said.

OCBC shares closed on Thursday at S$11.31, down 13 Singapore cents.

The last of the three local banks to report Q1 results, OCBC said total income for the first quarter rose 15 per cent to S$2.68 billion, from S$2.33 billion a year ago.

OCBC said net interest income grew to a new high, up 8 per cent to S$1.53 billion from S$1.42 billion a year ago, from healthy asset growth and a rise in net interest margin (NIM).

NIM rose nine basis points to 1.76 per cent from 1.67 per cent a year ago, mainly due to higher asset yields in a rising interest rate environment and an increase in gapping income from money market placements.

Customer loans grew 5 per cent to S$259 billion, from S$247 billion a year ago due to broad-based growth across key markets.

Non-interest income, meanwhile, grew 24 per cent to S$1.14 billion from S$918 million the year before.

Net trading income rose to S$285 million from S$94 million in the previous year. This was largely from an increase in customer flow income as well as improved financial market conditions, OCBC said. 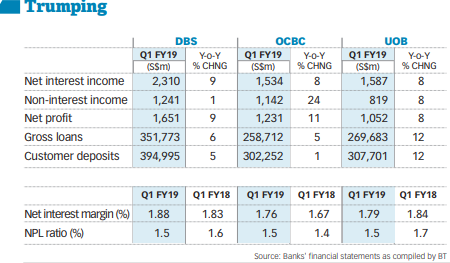 Geographically, Singapore accounted for 60 per cent of profit before tax, or S$887 million this quarter, up from S$697 million a year ago. China accounted for 19 per cent and Malaysia, 11 per cent.

Sustained net new money inflows and improved asset valuations also drove Bank of Singapore’s assets under management  (AUM) to a new high of US$108 billion as at end-March, from US$102 billion a year ago, the group said.

The group’s operating expenses went up by 6 per cent to S$1.10 billion from S$1.03 billion a year ago. Net allowances for loans and other assets were also higher at S$249 million, compared to S$12 million a year ago.

OCBC added that its non-performing loans (NPL) ratio was 1.5 per cent as at March 31, up from 1.4 per cent the previous year.

Although asset quality “remained sound” and non-performing assets dipped from the previous quarter, OCBC Bank CEO Samuel Tsien said the bank has decided to “prudently set aside” additional allowances for the group’s NPLs in the oil and gas support vessels and services sector through further write downs.

This is to “substantially reduce the value of vessel collateral to reflect the prolonged malaise in the industry”, he said.

Mr Tsien said the bank would continue to stay watchful of the progress of trade negotiations between the United States and China, developments in financial markets and conclusion of a number of elections in the region.

When it comes to sustainable financing, the bank also made "significant strides" to grow the financing of renewable energy projects and pledged to stop new coal-fired power plant financing, he said.

"With our strong funding and capital position, we are very well-placed to ride on new opportunities as they are presented and will continue to deepen our presence in our core businesses and markets," Mr Tsien added.

Amendment note: In a previous version of this story, we reported that OCBC's Q1 income rose to $2.68 million, it is in fact S$2.68 billion. We are sorry for the error.

THE International Chamber of Commerce (ICC) and 17 major multinational firms have signed a cooperation agreement...

CERTIFICATE of entitlement (COE) prices ended mixed in the latest tender on Wednesday (Jan 22) on the back of a more...