The clear out-performers were the cyclical sectors, chiefly technology and electronics; the telcos, shipyards and plantations fared less well
Anita Gabrielanitag@sph.com.sg@AnitaGabrielBT
There were some shockers that stood out over Singapore's latest reporting season, but by and large, corporates churned out mixed cards while the sweet scent of dividend lay thick in the air, making it an extended "feel-good" Valentine's season for some.
PHOTO: ST FILE

THERE were some shockers that stood out over Singapore's latest reporting season, but by and large, corporates churned out mixed cards while the sweet scent of dividend lay thick in the air, making it an extended "feel-good" Valentine's season for some.

The varied bag of fourth-quarter results earned the stamp of "not impressive" from CGS CIMB Research. Its own tally had under-achievers outflanking out-performers 15 to seven.

But for others like the DBS Group, who chose to see the glass as half full - it had equal numbers of hits and misses - the season delivered positive revisions.

Based on a compilation by The Business Times as at March 2, some 230 listed-companies on the Singapore Exchange reported combined earnings of S$6.2 billion in the fourth quarter. This was down 0.4 per cent from the year before.

For the full year, 417 firms collectively earned S$24 billion, down nearly 9 per cent from the year before.

For the quarter, over two-thirds of companies were in the black; 82 companies recorded earnings improvements, and 61 had lower profits than in the corresponding period of the previous year.

Among those already steeped in red ink, 14 sank deeper, and 21 posted smaller losses.

IG Singapore's market strategist Jingyi Pan said: "In terms of performance, the comparison with street estimates did find more misses than in the previous season, though the broad growth trajectory continues to support the positive earnings outlook for 2018."

There were some clear out-performers; cyclical sectors, chiefly technology and electronics, benefited from the joy ride in a rosy global macro landscape.

The investing fraternity's "pet" stock Venture Corp lived up to its earnings and dividend hype, while UMS Holdings and AEM Holdings outperformed on higher sales.

Hi-P International also doled out higher dividends on the back of its sustained earnings momentum over the quarter. 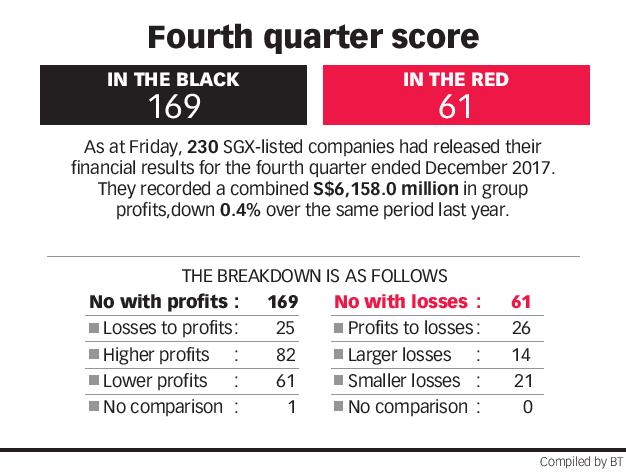 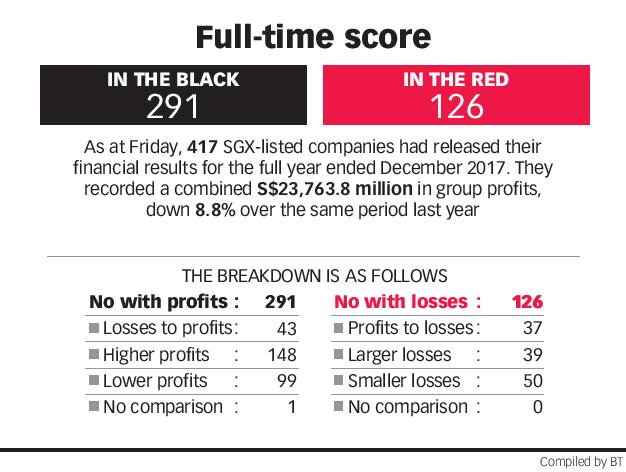 Earnings aside, it was Creative Technology that stole the limelight in the market by vaulting to a 10-year high this week. This came ahead of its launch of a new gadget, which CGS CIMB Research described as having "created more buzz than the tech /manufacturing earnings".

Singapore's three banking juggernauts, which together make up the lion's share of the local bourse's key Straits Times Index, didn't disappoint either; to varying degrees, they enjoyed the fruits of a strong report card and an upward earnings revision from the analyst fraternity amid rising interest rates, better loans growth and falling provisions.

DBS Group Holdings carried the torch for the sector, beating expectations with a windfall dividend to boot.

A rebounding property market and land-banking story gave room to developers to put up a strong performance in 2017.

One heavy hitter was UOL Group. While its net profit trebled in the full year to December 2017, boosted by the consolidation of affiliated property company United Industrial Corporation (UIC), the real surprise came from its higher dividends.

The group's healthy balance sheet and strong exposure to Singapore's residential market, which is in the nascent stage of recovery, has earned it a "Buy" rating from OCBC Investment Research.

While City Developments Ltd's fourth-quarter showing was largely in line, it is the builder's strong pipeline of launches here for this year which has won some analysts' hearts. CapitaLand's quarterly net profit slipped 38 per cent due to lower contributions from development projects in China and Vietnam.

The quarterly report card from Singapore's real estate investment trusts (Reits) offered few surprises - all 24 Reits under OCBC Investment Research's coverage met expectations. Distribution per unit growth declined marginally by 1.4 per cent from a year ago and 0.2 per cent from the previous quarter, with the hospitality segment faring the worst, said OCBC.

The telcos wrestled with an earnings setback as they faced higher expenses and rising competition in a saturated market. CSG CIMB described the sector's earnings outlook as "still grim", more so with the impending entry of a fourth telco that will sharpen the competition.

UOB Kay Hian said sectors that ran up the most number of misses included the shipyards and plantations. The reporting period pretty much began on a sombre note with stalwart Keppel Corp posting its first quarterly loss after booking in a hefty charge from fines for corruption in Brazil by its offshore and marine arm. Other weak hitters this season were Sembcorp Industries; its rigbuilder unit Sembcorp Marine sank into the red for the quarter.

Still, many analysts are unfazed, and are recommending that investors look beyond the blip and embrace their potential as the proxy for the oil and gas sector upswing.

By and large, offshore-and-marine companies under-delivered against expectations as a result of continued losses and impairments, said Credit Suisse's Ms Kum.

UOB Kay Hian has set the STI target for 2018 at 3,530, with an upside to 3,730 if there are earnings upgrades from the first quarter onwards.

[BANGKOK] Thailand's finance ministry cut its 2020 economic growth forecast to 2.8 per cent from 3.3 per cent it...

[SYDNEY] Qantas Airways chief executive Alan Joyce said on Wednesday it was too early for the airline to quantify...

[BEIJING] A drugstore in the Chinese capital will be fined 3 million yuan (S$590,000) for hiking the price of masks...

[TOKYO] Japan and a clutch of industrialised east Asian economies are increasingly snapping up overseas bonds, in...