Singapore investors back to selling of Wall Street stocks

Chuang Peck Mingpeckming@sph.com.sg@PeckmingBT
Singapore-based investors were back to dumping stocks on Wall Street this year, while US investors were leaning towards buying on Singapore Exchange (SGX).
PHOTO: AFP

SINGAPORE-BASED investors were back to dumping stocks on Wall Street this year, while US investors were leaning towards buying on Singapore Exchange (SGX).

After taking a breather from nine straight months of selling, switching to buying in the final quarter of 2015, Singapore investors reverted to the previous pattern of trading in the US stock market in the first half of this year - liquidating shares worth a net US$2.83 billion in the first quarter and US$410 million in the second quarter, the latest US Treasury figures show.

The sell-offs in the first three months of 2016 could have been driven by profit-taking as US equities rebounded in March after three consecutive months of losses, pulling returns into the black for the quarter.

The Standard & Poor's 500 Composite Index (S&P) jumped one per cent and the Dow Jones Industrial Average advanced 2 per cent. The Nasdaq composite index slipped 2 per cent, weighed down by losses in financials and smaller technology stocks.

Sales eased in the second quarter against a background of modest gains on Wall Street, as the US economy weakened and UK's vote to exit the European Union raised uncertainty in the market. Both the S&P and Dow rose 2 per cent, while the Nasdaq was flat. 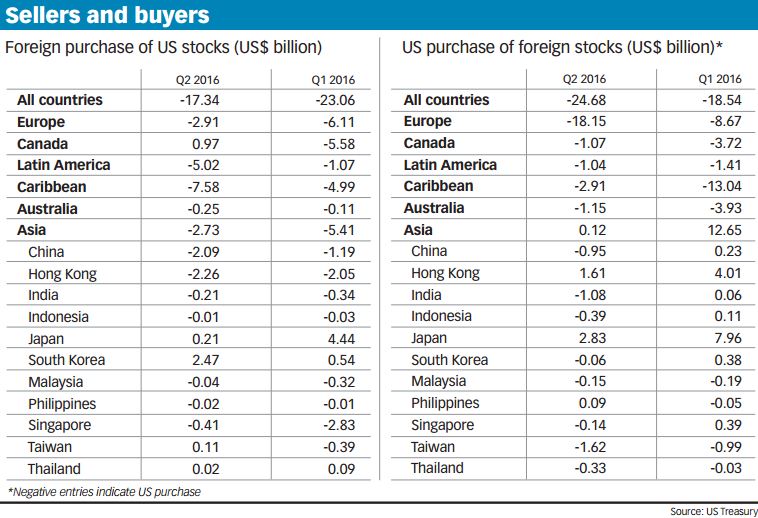 The Europeans and investors from the Caribbean accounted for half of the sales.

Asians as a whole, whose trade in US stocks was only smaller than the Europeans', dumped a net US$5.41 billion in the first quarter and US$2.73 billion in the second quarter, according to the US Treasury numbers. The main sellers were from Hong Kong.

The two big exceptions were the Japanese and South Koreans, who snapped up shares valued at a net US$4.65 billion and US$3.01 billion respectively in the first half of the year.

While the world was heading for the exit on Wall Street, US investors were on a shopping spree in global stock markets, as European equities tumbled 2.5 per cent in the first quarter and 2.7 per cent in the second quarter in US dollar terms.

After picking up a net US$18.54 billion of stocks in the first quarter, they upped purchases to US$24.68 billion in the second quarter, with European stocks making up over half of the haul, according to US Treasury figures.

In Asia, where share prices - with Japan the exception - generally rose in US dollar term during the period, US investors sold a net US$12.77 billion of Asian stocks in the first half, with most of the sales done in the first quarter.

The bulk of the net sales - US$10.79 billion - were in Japan, where equity prices plunged 6.5 per cent in US dollar terms in the first quarter. US investors got rid of a net US$388 million on SGX in the first three months of 2016, but turned to buying a net US$135 million in the following quarter.

US consumer confidence nudges up in Feb

[WASHINGTON] US consumer confidence edged up in February, suggesting a steady pace of consumer spending that could...