THE total market value of Singapore-listed stocks rose 3.1 per cent month-on-month to S$951.9 billion in April as each of the three local banks' market capitalisation grew at least 9.5 per cent.

Among the 733 stocks listed on the Singapore Exchange Mainboard and Catalist boards, gainers outnumbered losers 332 to 240.

Component stocks of the blue-chip Straits Times Index (STI) saw a more pronounced improvement of 5 per cent, to S$591.7 billion.

DBS, which has just announced a 9 per cent improvement in its first quarter net profit and increased its dividend payment frequency from two to four times a year, ended April with a market cap of S$72.4 billion, up 12 per cent. Its share price rose 12 per cent over the month to S$28.25 as at Tuesday's close.

OCBC and UOB will release their first-quarter financial results in May. 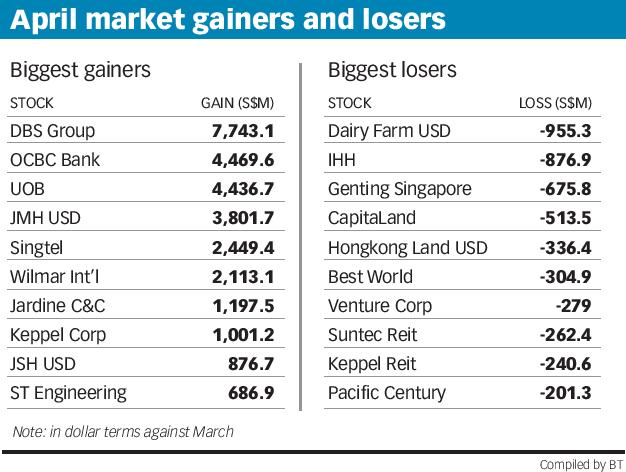 Some stocks in the Jardines stable that reversed their fortunes after taking a hammering in March, emerged among the top ten gainers by dollar value.

DBS Equity Research on Tuesday published a report with a "buy" call and a S$39.10 target price on Jardine C&C, citing more attractive valuations for the counter.

DBS analyst Lim Rui Wen wrote: "We like Jardine C&C for its diversified earnings growth across the region, on top of its strategic 50.1 per cent interest in (Indonesia-based automotive group) Astra International. We remain positive on Indonesia's longer-term outlook, and (Jardine C&C) represents an inexpensive entry into Astra International."

However, the Jardine group's Hongkong Land joined Dairy Farm International Holdings on the 10 largest losers by dollar value in April.

Dairy Farm lost 6.2 per cent, or S$955.3 million, of its market cap in April, ending the month with a market value of S$14.4 billion. The pan-Asian retailer was the top loser in dollar terms for the month just ended. Dairy Farm shares closed at US$7.83 on Tuesday.

Property company Hongkong Land's market value of S$22.3 billion was 1.5 per cent or S$336.4 million lower than at the end of March. Its shares closed out April at US$6.97.

Genting Singapore, which owns Resorts World Sentosa (RWS), lost S$675.8 million or 5.3 per cent in market value to end April with S$12.1 billion, as short-sellers bet against the casino operator. Its shares last traded at S$0.985.

A target of short-sellers, Best World International saw its market value shrink 25.3 per cent or S$304.9 million to S$898.1 million, as its share price fell by the same percentage to S$1.62 as at end-April. Trading in shares of the skincare products maker and distributor is currently halted.

[TAIPEI] Taiwan provisionally approved the use of dexamethasone, a cheap and widely-used steroid, to treat the new...

[PARIS] French bank Societe Generale announced on Tuesday a wide management reshuffle in a move to reduce costs and...

[LONDON] Jaguar Land Rover lost a UK court bid to get the trademark rights for the shape of its iconic Defender SUV...