Tourism sector growth spree set to continue in 2nd half

Nisha Ramchandaninishar@sph.com.sg@Nisha_BT
The tourism sector will likely retain its growth momentum in the second half of the year, underpinned by burgeoning travel demand and tourist flows from markets such as China and India.
PHOTO: ST FILE

THE tourism sector will likely retain its growth momentum in the second half of the year, underpinned by burgeoning travel demand and tourist flows from markets such as China and India.

However, downside risks remain, say industry watchers, including the spectre of a full-blown trade war, which could dampen sentiment.

Overall visitor arrivals for the January to April period are up nearly 7 per cent year-on-year to 6.18 million, preliminary estimates from the Singapore Tourism Board (STB) show.

Visitor numbers from China - Singapore's biggest source market - continue to power ahead with an 11 per cent jump to 1.22 million, while arrivals from India surged 19 per cent to 417,400.

Blockbuster events in the first half of the year included Herbalife SEA Extravaganza 2018 and Money 20/20 Asia 2018, while Industrial Transformation Asia Pacific and the Amway India Annual Leadership Summit are slated for October and December respectively.

Commenting on potential spillover benefits to the local economy, Selena Ling, head of treasury research and strategy at OCBC Bank, said: "The tourism industry isn't a very big contributor to GDP growth but a strong performance from the tourism sector this year could help to act as a buffer and mitigate any downside risks, especially if a full-blown trade war emerges."

According to the World Travel and Tourism Council (WTTC), the direct contribution of the travel & tourism sector to Singapore's GDP was 4.1 per cent last year.

Still, Ms Ling expects that regional tourism activities will continue to grow in 2H18, driven by an insatiable appetite for outbound travel and an emerging middle class in China.

"Singapore's tourism industry will likely continue to maintain its growth momentum into the second half of the year, unless a trade war causes the regional economies to go into a tailspin."

RHB analyst Vijay Natarajan said: "The outlook is still rosy at this point in time." He pointed to a strong MICE calender, a bounce-back in corporate demand as well as STB's ongoing efforts to woo secondary cities in China and India.

But while it appears unlikely for now, "the situation with economic and political uncertainties could cause jitters", he added. "Corporate travel could decline if business sentiments take a dip."

In the hotel industry, new room supply is finally expected to slow down after the boom in recent years, giving hoteliers some relief. As at end 2017, there were more than 67,080 hotel rooms across 420 hotels.

According to research from CDL Hospitality Trusts, the supply pipeline is expected to clock 2.5 per cent growth this year, before easing further to 0.8 per cent and 0.6 per cent in 2019 and 2020 respectively. This, together with rising visitor arrivals, is giving hotels a boost.

In the first four months of this year, improvements in the average occupancy rate (AOR) and average room rate (ARR) lifted revenue per available room (RevPAR) by 4.4 per cent year-on-year to S$191, STB numbers show.

Cushman & Wakefield senior director of research, Christine Li, said: "The current trend is expected to continue, with RevPAR and ARR expected to grow 3-5 per cent, and 2-4 per cent respectively for 2018. Occupancy rates could potentially near 87 per cent by the end of 2018 on the back of lower supply and increasing tourism."

For the full year, HVS president (Asia Pacific) Chee Hok Yean projects RevPAR to grow by nearly 3 per cent to S$187 this year, while occupancy and average daily rate is expected to edge up about one percentage point to 86 per cent and about 2 per cent to S$219 respectively. On visitor arrivals, she said the second half of 2018 should at least match 2H17.

Mr Natarajan expects RevPAR to grow by 3-7 per cent this year on the back of robust corporate and leisure demand as well as the tapering off in hotel supply injection. Industry-wide occupancy is likely to hold stable or even edge up by 1-2 percentage points, while ARR is likely to increase 3-5 per cent, he said.

Meanwhile, CBRE Hotels has revised upwards its RevPAR projection for this year. "At the beginning of this year, we had forecast that RevPAR would rise by 1 per cent, but based on the current market, we may see a 2.5 per cent to 3.5 cent growth," said Robert McIntosh, executive director of CBRE Hotels (Asia Pacific). 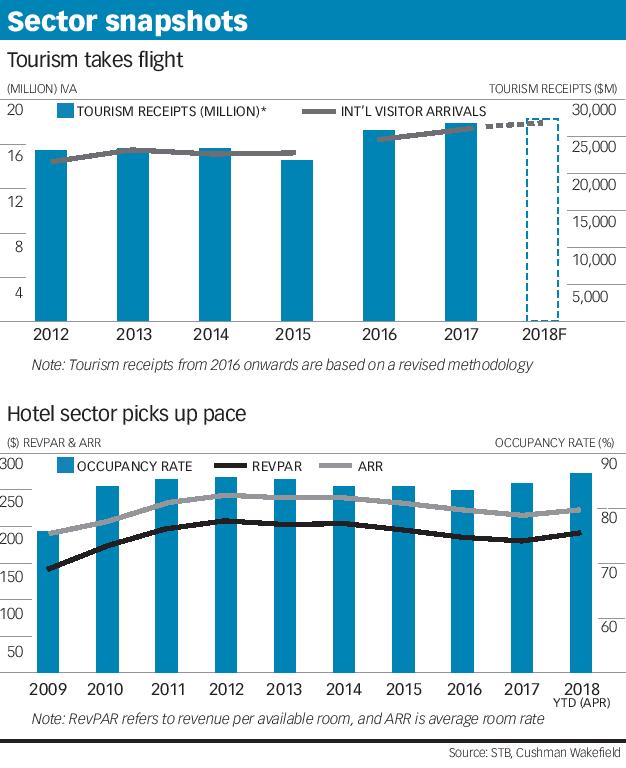 Potential headwinds for the tourism sector this year include the weakening of regional currencies if there is flight to safe haven currencies - which could deter visitors - as well as labour constraints, which remain an ongoing challenge for the services and hotel sectors.

However, industry observers pointed out that local hotels have started turning to technology such as robots to alleviate the manpower crunch.

Mr McIntosh added: "Increasing innovation, staff training, technology advancements and better hotel design will help to counter (manpower constraints). It is important, however, that Singapore players improve their service standards as other destinations are rapidly upping their game."

HDT Singapore Holding, whose electric taxis had plied the city-state's roads for about two years, is powering down...

[HONG KONG] More than 10 entities, including buyout firms Blackstone and Carlyle, have lodged bids for skincare...

[LONDON] European stock markets were mixed in opening deals on Friday in an unconvincing start to the final trading...

[HONG KONG] Stocks rose Friday to end the week on a healthy note and extend a winning streak to six days, boosted by...