All HDB industrial space to be under JTC by Q1 2018

A single agency will ease processes and help SMEs, it says; the terms spelled out by the HDB will continue to apply till the end of existing leases
Lee Meixianleemx@sph.com.sg@LeeMeixianBT
State industrial landlord JTC is bringing back all the government's industrial land and properties under its fold.
PHOTO: JTC

By the first quarter of 2018, all 10,700 industrial units and 540 land leases under the Housing & Development Board (HDB) will be consolidated under JTC, a single agency offering one-stop access to a full range of Singapore's public-sector industrial facilities.

The properties will be transferred from HDB's portfolio to JTC's at net book value.

Minister for Trade and Industry Lim Hng Kiang, who announced this on Wednesday at the soon-to-be-ready JTC Space @ Tampines North, said this will better support small and medium-sized enterprises (SMEs) in their business growth.

He said: "JTC will also be able to better match companies' space needs across the different stages of their growth with a larger supply of industrial land and space, including its innovative facilities."

He added that the government will be able to undertake more comprehensive master-planning of industrial estates across Singapore; the move will also facilitate more efficient clustering of complementary activities and integration of activities along the value chain.

Terence Seow, assistant chief executive of the Corporate, Policy & Planning Group at JTC, told reporters at a briefing on Wednesday that this is a timely development, as the economic environment has turned challenging and global competition has intensified.

"So in the last few years and the years going forward, what we really want to do is to help our SMEs grow and be better equipped to meet both domestic and global competition. That is the larger backdrop."

Asked why it has taken so long for JTC to perform this consolidation - the HDB industrial facilities were mostly built in the early 1980s - he replied that Singapore had undertaken its latest economic restructuring only after the 2008 Lehman crisis, to give its domestic firms an edge in the global marketplace. JTC and HDB had been discussing the consolidation over the past couple of years. 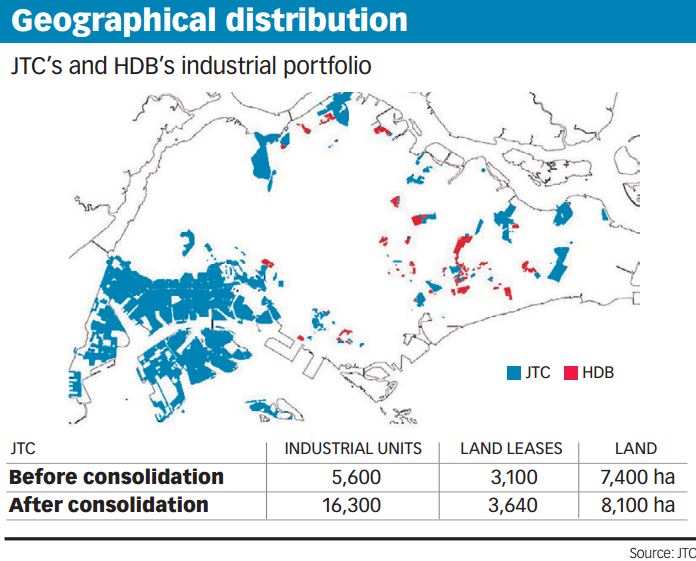 One common problem HDB industrial tenants face lies in finding adjacent space into which to expand; many end up taking space in multiple venues, sometimes across the island.

What JTC can offer SMEs is contiguous large floor plates in its own facilities.

It can also help SMEs plan ahead, by charting their growth trajectories and anticipating their future needs. JTC can provide, not just bigger spaces, but also land for expansion.

Guoxin Manufacturing is one example of an HDB tenant that is moving into a 1,180 sq m space at JTC Space @ Tampines North; this is twice the amount of space it used to occupy over five different units in Tuas and Ubi.

Managing director Richard Foo said this enables the company to save on transport costs and time, culminating in a "drastic" 40 per cent cost savings - mostly because it pays much higher rent at its Tuas facility run by a private institutional owner. HDB and JTC industrial rents are comparable.

All HDB tenants and lessees affected by the consolidation will continue to be served by the same team of 160 HDB officers, who will be transferred to JTC. JTC also gave the assurance that the contracted terms and conditions of their tenancies and leases with HDB will remain.

When interviewed, SME trade associations generally did not foresee any negative impact to this change, but some industrial tenants and property consultants voiced fears of uncertainty of tenancy renewal and rental rates.

Kurt Wee, president of the Association of Small and Medium Enterprises, approved of the change as long as the percentage of industrial stock in government hands stays the same. He said: "JTC has been a very forward-looking agency, and interfaces with the industrial ground very well. It also has extensive consultations and discussions with the ground when it makes decisions. SMEs tend to prefer having the government as landlord, instead of, say, commercial real estate investment trusts."

Daniel Ling, managing director at Uni-belt Supplies, a tenant at HDB's Ang Mo Kio Industrial Park 2, said some tenants there are worried about rental increases. "The older generation people, those aged 60 to 70 and still running businesses, are not so comfortable with JTC," he said; he added that this had nothing to do with any characteristic of JTC per se, and that it was just the uncertainty of coming under a new, unfamiliar landlord.

CBRE's managing director of industrial and logistics for Asia, Dennis Yeo, likes it that JTC will be taking over all the industrial functions because he believes it is more proficient at the task. He noted that industrial approvals from HDB can take a long time.

But he noted that there are some conflicting HDB and JTC rules that need to be reconciled. For example, for some HDB industrial properties, a levy of 10 per cent of enhanced value has to be paid when these properties are transacted; there is no such levy for JTC properties, although there is a moratorium period during which they cannot be sold.

Responding to this in a statement late on Wednesday, JTC said: "We recognise that HDB's industrial land and properties were tenanted, leased or sold under a different basis, and with different terms and conditions. These terms and conditions will remain unchanged for the duration of the tenancy or lease contracts."

READ MORE: JTC primed to be even bigger industrial player

S Korea's thirst for US crude to keep growing in 2020

[SEOUL] South Korea is on track to overtake Canada as the top buyer of US crude oil in 2020 as a mix of steep price...

Wuhan scraps easing of quarantine hours after announcing it

[BEIJING] Authorities in Wuhan on Monday reversed a decision that would have...

[SEOUL] South Korean stocks slumped nearly 4 per cent and the won slid on Monday, as the unabating spread of the...

THE Singapore Exchange (SGX) on Monday launched its methanol futures and swap contracts.

'Guest is God': Crowds gather to greet Trump as he lands in India

[AHMEDABAD, India] US President Donald Trump landed in the western Indian city of Ahmedabad on Monday, at the start...