Chuang Peck Mingpeckming@sph.com.sg@PeckmingBT
2017 has been a calmer year for global container shipping following a tempestuous 2016, but the industry will once again have to navigate choppy waters in the next couple of years.
ST PHOTO: ONG WEE JIN

STRONG trade data in August is likely to point to vigorous third-quarter growth in the economy, but not beyond that, some private-sector economists have predicted.

Practically all the trade numbers powered up last month, with little sign of waning. The key non-oil domestic export (NODX) grew 17 per cent year-on-year. This was the strongest expansion in six months, exceeding July's 7.6 per cent (revised from 8.5 per cent) growth and beating the market forecast of 11.8 per cent.

Month on month, the NODX bounced back from a 3.3 per cent fall in the previous month to post a seasonally adjusted 4.5 per cent rise in August, going by the latest trade data released on Monday by the government's trade promotion agency, International Enterprise Singapore.

Stronger shipments of integrated circuits (ICs), disk-media products and parts of ICs drove electronics NODX growth higher to 21.7 per cent, after a 15.3 per cent jump in July.

The electronics NODX has been expanding for 10 consecutive months with little sign of letting up.

Non-electronics exports also put on a better showing. Pharmaceuticals shipments, a volatile segment, moderated from minus 53.6 per cent in July to minus 9.1 per cent in August.

Exports of non-monetary gold recovered from a 18.7 per cent drop to soar 137.7 per cent over the same period. 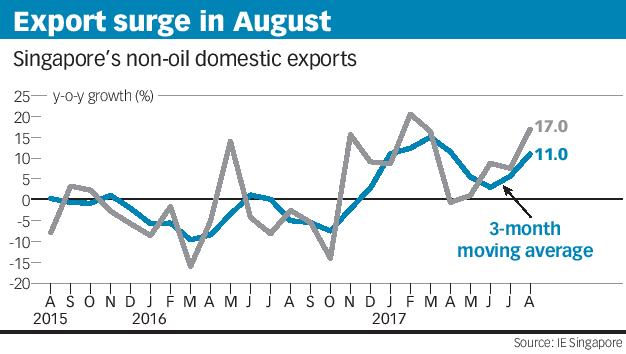 Citigroup's Kit Wei Zheng said in a brief report that the latest NODX number indicates an uptick in export pace in the third quarter.

"With growth broadening to services, we see overall third-quarter GDP growth coming in at around 3.5 to 4.0 per cent," he said.

The economy expanded 2.9 per cent in the second quarter and the government expects it to grow by between 2 and 3 per cent for the full year.

Nomura's economic research team in Singapore counts the semiconductor sector and shipments of chips as the main driver of GDP growth, but they think the tech cycle will soon run out of steam.

OCBC Bank's Selena Ling estimated that the NODX increased 9.9 per cent in the first eight months of the year. IE Singapore expects the NODX to rise 5 to 6 per cent in 2017.

Francis Tan of UOB Bank suggested that NODX growth will ease in the months ahead: "We do not expect the strong double-digit NODX growth since November 2016 can be sustained towards the end of 2017. This is especially since the current electronics cycle may be coming towards an end, with the rolling out of the next wave of smartphones in the months ahead."

A slowdown in the growth of China's economy, Singapore's biggest export market, may also pose some risks to NODX's rise, he said.

Taiwan may be the only one among Singapore's top 10 markets for which NODX shipments fell in August; the biggest contributors to NODX's surge last month were still East Asian markets - in particular China (+43.2 per cent), Hong Kong (+41.9 per cent) and South Korea (+62 per cent).

Shipments to China expanded much more strongly than in July, when NODX exports to the country rose 19.6 per cent. The exports were led by non-monetary gold, petrochemicals and ICs.

The latest trade figures also revealed that oil domestic shipments increased 23.5 per cent in August, up from the 5.7 per cent increase of the previous month. It was the 12th straight month of expansion for oil domestic exports.

Non-oil re-exports, an indicator of regional and global trading sentiments, rose 11.9 per cent - easing from 16.7 per cent growth in July.

Total trade last month jumped 15.6 per cent to S$82.3 billion. It was the 10th straight month of increase.

AEROSPACE component maker JEP Holdings said on Monday that its wholly-owned unit JEP Industrades has entered into a...

TALKMED on Monday posted a fourth-quarter net profit of S$10.9 million, up 18.9 per cent from the same period a year...

Thai army to transfer control of land after mass shooting

[BANGKOK] Thailand's army agreed on Monday to transfer management control of 160,000 hectares of commercial land to...

[BANGKOK] Thailand's economy grew at its weakest pace in five years in 2019 as exports and public investments slowed...

[LONDON] Global trade in goods will likely stay weak in coming months as disruptions from coronavirus in China...