Lee U-Wenleeuwen@sph.com.sg@LeeUwenBT
Prime Minister Lee Hsien Loong witnessed the signing of a legally-binding bilateral agreement for the RTS Link together with Malaysian Prime Minister Najib Razak at the Istana on Tuesday after their annual leaders' retreat.
PHOTO: LIANHE ZAOBAO

THE human and vehicle congestion that is a common sight at the Causeway these days is likely to be significantly alleviated come the end of 2024.

That is when the new Rapid Transit System (RTS) Link - a major cross-border project between Singapore and Malaysia - is expected to begin operations.

The 4km-long MRT line between Woodlands and Johor Baru, first announced back in 2010, will allow commuters to board a train every 8 minutes on average. The plan is to have the trains depart every 4 minutes on average during peak periods.

When fully operational, the RTS Link will be able to carry as many as 10,000 people every hour in each direction. This means an additional capacity of 60,000 passengers crossing the Causeway during peak hours.

Malaysia's Land Public Transport Commission (Spad) chief executive Mohd Azharuddin Mat Sah was quoted in a Bernama report as saying that the travel time on the RTS Link would take about 30 minutes, compared to an hour currently via the existing KTMB Tebrau Shuttle.

What the RTS Link can accommodate is also much higher than the average 300 commuters per hour in each direction that the Tebrau Shuttle handles today.

This shuttle will cease operations six months after the RTS Link begins service. Until then, however, the two countries have agreed to increase the frequency of the shuttle service to cope with the demand.

Prime Minister Lee Hsien Loong witnessed the signing of a legally-binding bilateral agreement for the RTS Link together with Malaysian Prime Minister Najib Razak at the Istana on Tuesday after their annual leaders' retreat.

A joint statement from Singapore's Land Transport Authority (LTA) and Malaysia's Land Public Transport Commission said the RTS Link would cross the Straits of Johor via a 25m-high bridge. 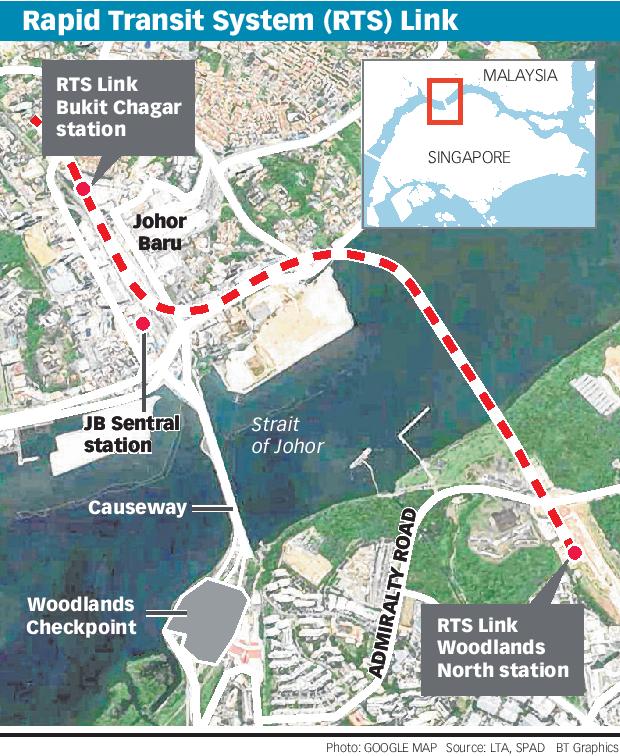 This bridge, which will bend over land in Johor rather than over water as was originally mooted, will link the Bukit Chagar station in Johor and the Woodlands North MRT station in Singapore.

LTA and Prasarana Malaysia Berhad will be appointed as infrastructure companies to fund, build, own, maintain and renew the civil infrastructure and stations within the respective territories in the two countries.

Separately, Singapore and Malaysia will jointly appoint an operating company (OpCo) to own, design, build, finance, operate, maintain and renew the RTS Link's operating assets such as the trains and tracks.

This company will pay a concession fee to the two countries in exchange for the right to collect fare revenue from operating the RTS Link.

The fares, to be announced at a later date, will be set commercially by the OpCo and will not be regulated by the two governments.

Speaking to the media shortly after the signing ceremony, Mr Najib said he had raised the issue of the current Causeway congestion with Mr Lee during their retreat meeting.

"There were reports that during peak hours, and especially during the festivities and school holidays, there's quite significant congestion and people from both sides have to wait as long as 3 to 4 hours to get clearance. We both agree that we need to resolve this, and there are some proposals," said Mr Najib.

One suggestion is to review the toll fares at the Second Link in Tuas in order to make that checkpoint "more attractive" for people to use.

"That is something we will take back (to Malaysia), and we will communicate with each other. Hopefully we will be able to agree on a decision as soon as possible," Mr Najib added.

In his remarks, Mr Lee said the enhanced connectivity as a result of the RTS Link would also boost economic cooperation in Iskandar Malaysia (IM) in Johor.

He noted that Singapore is currently the second-largest foreign investor in IM and Johor.

"We are working closely together through the joint ministerial committee for IM to foster a conducive business environment and enhance vocational and technical education training in skills that investors need."

The leaders also touched briefly on the progress for the bilateral high-speed rail (HSR) project. This bullet train service will begin operations by end-2026 and cut the travel time between Singapore and Kuala Lumpur to just 90 minutes, down from the current 4- to 5-hour journey by road.

The tender for the assets company for the HSR was called last December and Mr Lee noted that it attracted "strong international interest".

"We will have many good offers to choose from, and the procurement will be done in fair, open and transparent manner," he said.

The next leaders' retreat is expected to be held in Malaysia at the end of this year, after Malaysia's upcoming general election.

[WASHINGTON] A federal appeals court on Friday rejected a request by US President Donald Trump's campaign to block...