SINGAPORE'S business confidence for the final quarter touched a near two-year low, with manufacturing and wholesale trade braced for a downturn.

Economists were not surprised by the picture painted by the latest Singapore Commercial Credit Bureau (SCCB)'s Business Optimism Index.

Meeting in the middle

CIMB Private Banking economist Song Seng Wun said both manufacturing and wholesale trade were the most exposed to the trade war on the global demand side.

When the trade war began, the two sectors were in the immediate line of fire, and contributed significantly to GDP (gross domestic product) slowdown, Mr Song said. "The outlook for manufacturing and wholesale trade is simple - it depends on Donald Trump."

OCBC Bank economist Selena Ling added that both sectors have been in the doldrums for a while. "Just see the PMI (Purchasing Managers' Index) readings below 50. Given the protracted US-China trade and tech war, it is unsurprising that business sentiments reflect these uncertainties."

The PMI stood at 49.9 in August; a reading over 50 indicates expansion, while one under 50 indicates contraction. Six indicators were used to gauge business sentiment in the Business Optimism Index: sales, profits, new orders, employment, inventory levels and selling price.

Manufacturing's sole positive indicator was in employment, while wholesale trade had none. 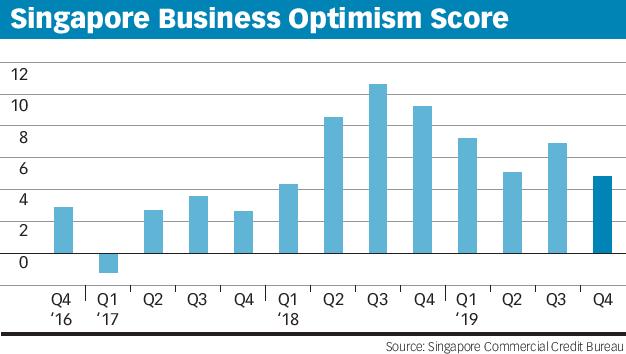 "While there is a net job loss in manufacturing, we continue to see investment in the sector's jobs, particularly in areas like electronics," said Mr Song. "This shows a long-term vision."

Wholesale trade, on the other hand, was much more dependent on the ground, Mr Song said. "If there is no pick-up on orders, you don't have to employ more people."

Amid the lowered expectations, there was still some room for positivity. The financial industry was the most optimistic sector with all indicators in the green versus the previous quarter except selling price. The latter rebounded from -20 percentage points to 0 percentage point but failed to enter positive territory.

"The financial sector is likely benefiting from the ongoing swings between risk-on and risk-off sentiments," said Ms Ling.

Mr Song said that within the services sector, only wholesale trade has been affected. "So within financials, volatility is good for FX (foreign exchange market), insurance and derivatives."

"We've seen financial services being augmented by digital. There's still growth within financial on several fronts in IT (information technology), ICT and technology."

Not all industries and sectors are slowing down at the same rate, said CIMB's Mr Song.

OCBC's Ms Ling added that job creation will likely be industry-specific like for ICT (information and communications technology), healthcare and education, rather than broad-based.

Mr Song said: "We're in the late stage of a mature growth cycle - it doesn't mean no growth, just slow growth." But there could be more downward pressure on growth from US President Donald Trump's comments and actions, he added.

Ms Ling said employers are also factoring in the ageing population and upcoming tightening of the dependency ratio ceiling (DRC) for the services sector from 2020.

Overall, five out of the six indicators were lower in Q4 2019 versus the previous quarter.

The slide in sales, profits, new orders, employment and inventory levels, vs an improvement in selling price contrast with levels in the previous quarter, where all indicators except selling price had risen. In the remaining sectors, transportation had three neutral (0 percentage points) indicators while three were positive. Construction saw three positive, one neutral and two negative indicators.

The figures were derived from polling 200 business owners and senior executives representing major industry sectors across Singapore, and are calculated by subtracting the percentage of respondents expecting decreases from the percentage expecting increases.