China denies report it could halt US bond purchases

China denied on Thursday a report that it may slow or cease its purchases of US Treasury bonds, calling it a possible case of "fake news" after the dollar tumbled following the story.
PHOTO: BLOOMBERG

[BEIJING] China denied on Thursday a report that it may slow or cease its purchases of US Treasury bonds, calling it a possible case of "fake news" after the dollar tumbled following the story.

"We think this story could be quoting a mistaken source or it could also be a piece of fake news," the State Administration of Foreign Exchange said in a statement on its website.

Beijing is the biggest holder of US debt and the news was seen by some as a veiled threat to President Donald Trump following his tough talk on global trade and, in particular, what he sees as China's unfair practices. 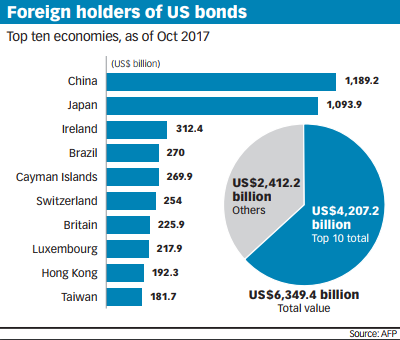 "The management of investments in China's foreign exchange reserves has always been carried out according to the principle of diversification and distribution," SAFE said in its statement.

"As with other investments, professional management of China's foreign reserves investment in American bonds is professionally managed according to market activity, on the basis of market conditions and investment needs."

The greenback sank against most of its peers following the news Wednesday on fears that a huge amount of foreign demand for dollars would dry up.

The bond market reacted negatively before recovering through the day and ending slightly up.

"US Treasuries are often used during the political ping-pong match when trade tensions escalate," said Stephen Innes, head of trading for OANDA in the Asia Pacific.

"It's entirely possible that China could take measure to rebalance their reserve as they have done in the past," Mr Innes said.

But markets quickly realised "it's highly improbable China will stop buying US Treasuries".

The world's second largest economy has long invested heavily in US bonds as a way of controlling the value of its own currency the yuan.

Bloomberg News estimates that the Chinese state currently holds around US$1.2 trillion in US debt, an amount that has doubled over the last 10 years.

That puts it neck-in-neck with Japan as America's largest creditor.

Beijing's massive US debt holdings are a bugbear for some US politicians, who claim they give China too much leverage over Washington.

But any attempts to use that power could hurt the US dollar, damaging China's own US holdings.

"In practice, the People's Bank has fewer choices over the size or allocation of its foreign exchange purchases than is sometimes assumed," according to a research note from Capital Economics.

"If the PBOC were to precipitate a large sell-off by retreating from the US Treasury market, the value of its existing reserves would fall."

TRAX, a computer vision tech and in-store analytics firm backed by GIC, has bought Paris-based startup Qopius for an...

Facebook warns of risks to innovation, freedom of expression ahead of EU rules

[BRUSSELS] Facebook warned of threats to innovation and freedom of expression on Monday, ahead of the release of a...