Sector jumps 32.4%; manufacturing beats forecasts to expand 17.9%; low base in Jan 2017 one factor for robust performance
Chia Yan Minchiaym@sph.com.sg@ChiaYanMinBT
This year is set to be another good one for the manufacturing sector, going by January data.
PHOTO: REUTERS

Strong start to the year

THIS year is set to be another good one for the manufacturing sector, going by January data.

Manufacturers started 2018 on a high note with output expanding 17.9 per cent last month from a year earlier, surpassing economists' forecasts of 7.5 per cent and reversing a 3.4 per cent slide in December.

Manufacturing, which makes up a fifth of the economy, has been a key growth driver over the past year. The sector has been buoyed by strong global demand for electronic gadgets.

This robust showing continued last month - electronics registered a 32.4 per cent year-on-year surge in output, thanks largely to the semiconductor, infocomms and consumer electronics and computer peripherals segments.

Precision engineering, which has also benefited from the pick-up in electronics demand, grew 24.5 per cent year on year last month, according to Economic Development Board figures out on Monday.

There was broad growth across the rest of the sector, including the volatile biomedical segment which expanded 2.5 per cent.

This came as the medical technology segment posted robust growth of 22.8 per cent on the back of strong export demand for medical devices. On the other hand, pharmaceuticals output slid 3.9 per cent due to lower production of active pharmaceutical ingredients.

If biomedical manufacturing were excluded, overall factory output would have gone up an even higher 21.6 per cent last month.

Some segments are still suffering, however. The marine and offshore engineering segment - which has been mired in a downturn amid low oil prices - contracted 19.5 per cent last month on the back of low level of shipbuilding and repair activities.

Economists were cheered by January's strong showing and said it bodes well for the economy's growth this year. "This is a synchronised global recovery, which is why manufacturing continues to do well," said DBS economist Irvin Seah. 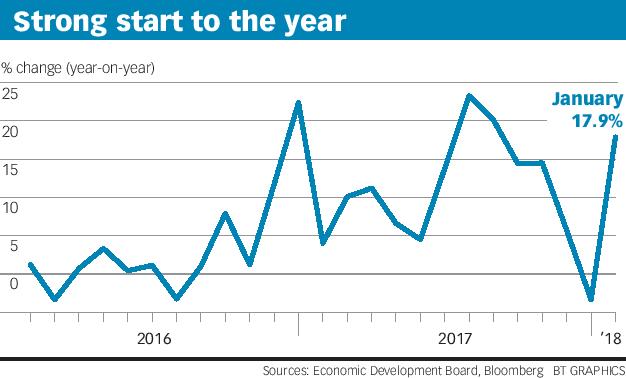 In addition, some activities might have been brought forward from February to January in view of this year's Lunar New Year celebrations, noted CIMB Private Bank economist Song Seng Wun.

But output in January also went up significantly - 6.7 per cent - compared with December, indicating that "the global recovery story is still very much intact", Mr Seah noted, adding that this points to better times ahead for manufacturers.

"Manufacturing growth could moderate slightly this year from last year, but it'll still grow at a healthy pace," he said.

UOB economist Francis Tan is also optimistic about the global growth outlook but noted that electronics demand - particularly for semiconductors - could moderate this year.

"We previously warned that the on-year double-digit type of semiconductor growth in 2017 may no longer be a familiar sight in 2018, as Asia-Pacific semiconductor sales have slowed quite considerably," said Mr Tan.

He expects the manufacturing sector to grow 4.4 per cent this year, from last year's 10.1 per cent expansion.

[SINGAPORE] Bitcoin volatility is back to levels not seen since early November, thanks to a sudden tumble toward the...

[BEIJING] China reported the biggest drop in new cases from the coronavirus outbreak in nearly a month on Thursday...

[VIENTIANE] China's foreign minister is set to meet his Southeast Asian peers in Laos on Thursday for crisis talks...