Extra S$8b worth of liquidity tied up due to poor working capital performance: study

The report shows 8 out of 15 sectors, including O&M, are struggling to manage working capital performance y-o-y
Stephanie Luobtnews@sph.com.sg@StephLuoBT
Working capital performance in half of Singapore's business sectors has deteriorated year on year (y-o-y), translating into an additional S$8.7 billion of liquidity tied up, a joint study by PwC Singapore and Spring Singapore has found.
PHOTO: ST FILE

WORKING capital performance in half of Singapore's business sectors has deteriorated year on year (y-o-y), translating into an additional S$8.7 billion of liquidity tied up, a joint study by PwC Singapore and Spring Singapore has found.

The working capital study looked at over 1,000 public and private companies across 15 industries in Singapore.

Eight out of 15 sectors, including offshore & marine, have either seen the performance of their NWC days deteriorate or shown signs of struggles in maintaining their y-o-y performance. Also, 10 out of the 15 sectors registered a loss in revenue y-o-y.

The study identified some sectors that struggle more than others, including energy & chemicals which suffered significant revenue loss of 25 per cent y-o-y while struggling to manage their receivables (+29 per cent y-o-y) and inventory (+38 per cent), and tried to partially counterbalance their cash constraints by increasing their days to pay.

The offshore & marine sector, which has been going through a rough patch the past few years, continues to suffer with 63 per cent of its businesses seeing the performance of their NWC days deteriorate y-o-y.

However, the study said that some of the larger players have helped to substantially improve the sector's overall performance by increasing the amount of time for the company to pay its creditors, thereby positively impacting their NWC days. 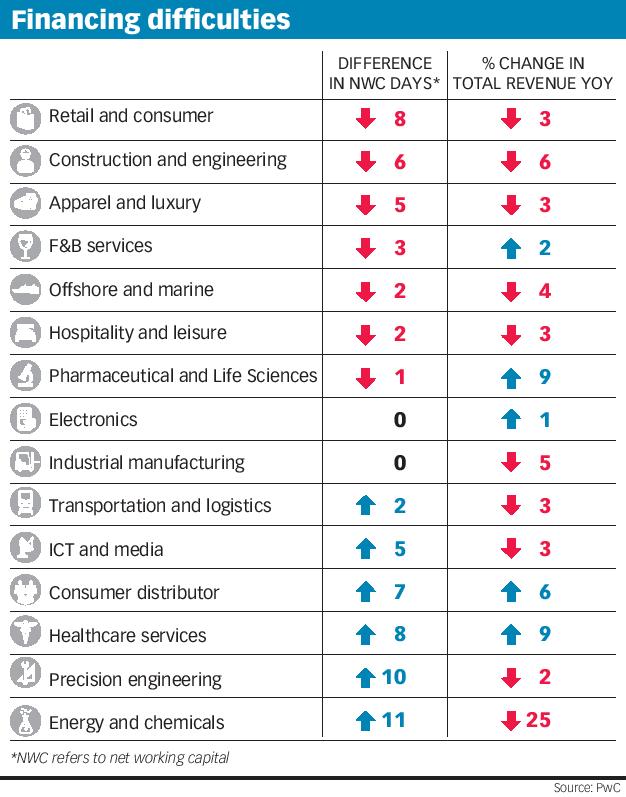 The businesses studied in Singapore saw a 2.6 per cent decrease in revenue, a y-o-y increase of 1.3 NWC days, and an average increase of 3.5 NWC days over the past three years that "reflects a scenario of increasingly locked-up cash".

In addition, the study found that company size matters when it comes to managing working capital.

Medium-sized companies, with revenues between S$10 million and S$100 million, struggle the most in managing their working capital with the highest ratio at 18 per cent.

One reason given in the study was higher cost for growth, which increases their difficulty in accessing funding at favourable rates.

"They find themselves battling for cash while having little negotiating power. Inadequate proficiency in managing a growing business coupled with lagging tools and systems can also add to poor performance."

PwC and Spring said that against a backdrop of increasing interest rates and a volatile economic environment, businesses in Singapore need to focus on improving their cash management to mitigate risks, fund their day-to-day operations and finance their growth plans.

The working capital study looked at over 1,000 public and private companies across 15 industries in Singapore.

[NEW YORK] The more the TV business changes, the more the Emmy Awards stay the same.

ByteDance, Oracle at loggerheads over terms of TikTok agreement

[NEW YORK] ByteDance and Oracle Corp issued conflicting statements on Monday over the terms of an agreement they...

Study suggests dengue may provide some immunity against Covid-19

[RIO DE JANEIRO] A new study that analysed the coronavirus outbreak in Brazil has found a link between the spread of...

CATALIST-LISTED kitchen-equipment supplier Kitchen Culture Holdings has called for a shareholder vote on Oct 7 over...

Banks in Singapore handled about US$4.5 billion in suspicious transactions: FinCEN leaks