Chuang Peck Mingpeckming@sph.com.sg@PeckmingBT
Poor sales and job cuts are in the news. But unusually, it's not being accompanied by reports of pay freeze and cuts. Instead, we are hearing that pay will keep rising next year.
PHOTO: ST FILE

POOR sales and job cuts are in the news. But unusually, it's not being accompanied by reports of pay freeze and cuts. Instead, we are hearing that pay will keep rising next year.

Unlike in the past when business starts to slow down, there appears to be little sign of companies moving in the current economic slowdown to put a lid on wage hikes, or trim wages, to save costs and make up - at least partly - for the loss of falling revenues and profits.

Surveys done recently by compensation experts Mercer-HRBS and Willis Towers Watson show most employers are still planning to give workers a raise next year. There's no indication of impending cut in salaries; and only four in 100 of the respondents in the Mercer-HRBS poll intend to freeze wages.

It's not because things are expected to get better and companies want to ensure they have enough workers around when business picks up. On the contrary, most businessmen don't see a recovery soon.

Finland's millionaire premier freezes pay in bid to save economy

The Monetary Authority of Singapore, which finds similarities between the labour market now and when it was in the 2009 recession, thinks 2017 will continue to be sluggish for Singapore's trade-dependent economy, going by the weak outlook for global trade. Private-sector economists are more downbeat, reducing their earlier 2.1 per cent growth forecast for the economy next year to 1.8 per cent - the same growth tipped for this year.

Across-the-board freeze and cut in wages are no longer favoured as an economic policy tool. While the reduction in the national Central Provident Fund (CPF) rate in 1985-86 was seen as a big move that got Singapore out of a major recession, it's also recognised that cutting back CPF contributions evenly for all to ease the wage cost burden in a downturn is a blunt move that's not always effective. The CPF cut may not be very helpful for firms hardest hit in a business slump, but it's overly generous for those who have escaped it.

So the National Wages Council did not prescribe a CPF cut in 2009, even though a recession was looming. It told bosses to do their own pay freeze or cut if they thought it's needed - and they should vary the amount cut according to what they saw fit. 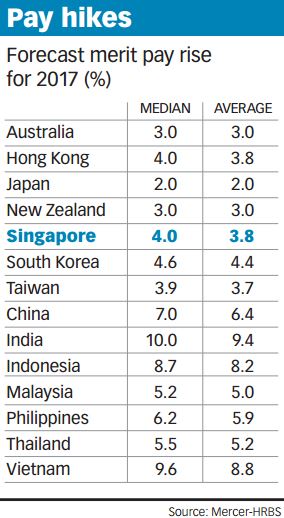 The push then was for a flexible wage system, where wages in a company go up if its business is doing well - and down if it's bad. But if pay is still going up next year even though business is likely to remain weak, as the two surveys suggest, then the flexi-wage system may appear to be not working well.

Defenders of the system, of course, will disagree. They can point out that the projected increases in the surveys are smaller than the raise handed out this year - thanks to flexi-wage.

Willis Towers Watson's survey, conducted in June, indicates that salaries will rise 4.0 per cent nominally on average in 2017, while Mercer-HRBS' more recent poll shows a merit pay increase of 3.8 per cent. These are slightly lower than the 4.2 per cent hike expected for this year.

The projected wage increment is also likely to be smaller than those in the rest of the Asia-Pacific region, which is tipped to see salaries spike 6.4 per cent on average next year, according to Willis Towers Watson. Against Singapore's closest Asian competitors, Mercer-HRBS' survey shows the 2017 salary increase here is likely to be on par with that in Hong Kong, lower than in South Korea and higher than in Taiwan.

Elaine Ng, a leader consultant at Mercer-HRBS, says rather than hold pay still, or cut it, employers these days prefer to trim excess staff in a business slump - and "dish out salary increase to remaining employees to upkeep morale and retain their services for the upturn in business".

She adds that the labour market remains tight for "target skill set" in a workforce where over half of the workers are professionals, managers, executives and technicians.

Staff poaching is still rampant, with the poaching rate averaging 10-15 per cent for senior managers, managers and professionals, according to her.

[LONDON] The United States on Wednesday urged Britain to look again at its decision to allow China's Huawei a...

CCCS calls for feedback on proposed merger of 2 Korean shipbuilders

SINGAPORE'S competition watchdog is taking a deeper scrutiny of the potential merger of two Korean shipbuilders and...

Singapore confirms 3 more Wuhan virus cases, bringing total to 10; all are from Wuhan

[SINGAPORE] There are three new cases of Wuhan coronavirus infection in Singapore, said the Health Ministry on...

WHILE EC World Reit (real estate investment trust) has a portfolio of eight assets in China, of which one is in...