NON-OIL domestic exports (NODX) ended the first half of 2017 with a better-than-expected showing - and private-sector economists expect the fine performance to continue for a few more months in the second half before easing.

After two flat months, with the figure in May revised upwards from -1.2 to 0.4 per cent, trade promotion agency International Enterprise Singapore reported on Monday that the NODX surged 8.2 per cent year-on-year in June, beating the market's 5.0 per cent forecast.

The surge was the highest since March and was impressive enough to lead some economists like Citigroup's Kit Wei Zheng and Maybank-Kim Eng's Chua Hak Bin to speculate about an upward revision in the second-quarter GDP growth figure, which official flash estimates last week put at 2.5 per cent.

In any case, the broad view among economists is that June's NODX growth is not likely to fizzle out any time soon. "We expect NODX to continue posting robust growth for the next four months before moderating in November or December due to high base growth effects," says Maybank-Kim Eng's Mr Chua, echoing the views of most economists.

"The rosy trade picture is consistent with other transport metrics, such as container throughput (up 9.6 per cent in the second quarter, against a 3.0 per cent rise in the first)," he adds. 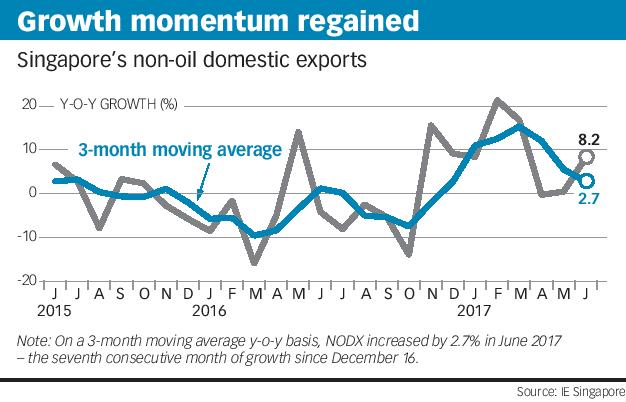 Consequently, the NODX dipped a seasonally-adjusted 2.7 per cent month-on-month in June, after rising 9.4 per cent in May.

Citigroup's Mr Kit says electronics exports and the Chinese market were the key growth drivers in the first half and will remain so for the rest of the year.

NODX shipments to China, which increased 39.0 per cent in May, were driven by non-monetary gold, integrated circuits (ICs) and petrochemicals.

Non-electronics shipments jumped 9.3 per cent, reversing the 8.6 per cent fall in May, and were driven by exports of non-monetary gold (+148 per cent), specialised machinery (+76.1 per cent) and petrochemicals (+13.7 per cent). The pharmaceuticals segment was still doing badly, declining 34.2 per cent.

But while the rebound in non-electronics export growth offset the sharp moderation in electronics export performance, private-sector economists are almost unanimous in their views that the latter, as OCBC's Selena Ling says, "still has some legs to run in the second half of 2017", though at slower pace.

Adds Citigroup's Mr Kit: "In particular, despite the technical pullback in June, the semiconductor NODX rose (a seasonally-adjusted) 9.7 per cent quarter-on-quarter (in the second quarter of 2017), accelerating further from the already impressive 7.7 per cent rise in the first quarter, suggesting that the upswing in the tech cycle remains intact."

Non-oil re-exports, a proxy for wholesale trade services and gauge of regional trading sentiments, continued to post robust growth at 9.1 per cent in June, against 15 per cent in May, driven by both electronics (+10.2 per cent) and non-electronics (+8.0 per cent).

Oil domestic exports rose 5.1 per cent, the 10th consecutive month of expansion, after a 24-month decline. But, according to UOB's Francis Tan, the strong increases in oil shipments in the past few months are expected to ease in the second half of the year as "the low base effects of oil prices from 2016 will start to wear".

HIGHER taxes took a toll on the full-year showing of Southern Alliance Mining (SAM), in the iron-ore producer's...

[LONDON] Just a week after revealing its plan to turn itself into a clean-energy giant, BP watched its share price...

[TOKYO] Masayoshi Son has reduced the number of SoftBank Group shares he's pledged as collateral to lenders by about...

[HONG KONG] Hong Kong shares finished a tough week with another loss Friday as traders are spooked by rising virus...

Minimum CPF interest rates extended by a year to Dec 31, 2021