Janice Hengjaniceh@sph.com.sg@JaniceHengBT
The 4.4 per cent figure for first quarter year-on-year growth is up marginally from initial estimates of 4.3 per cent, and faster than the 3.6 per cent growth in the preceding quarter.
PHOTO: ST FILE

SINGAPORE'S gross domestic product (GDP) grew 4.4 per cent in the first three months of 2018, with full-year growth expected to come in at "2.5 to 3.5 per cent" this year, said the Ministry of Trade and Industry on Thursday.

The MTI had previously expected Singapore's 2018 growth to come in "slightly above the middle" of a forecast range of 1.5 to 3.5 per cent.

The 4.4 per cent figure for first quarter year-on-year growth is up marginally from initial estimates of 4.3 per cent, and faster than the 3.6 per cent growth in the preceding quarter.

Growth was primarily supported by the manufacturing sector - which surged 9.8 per cent, up from its 4.8 per cent expansion the previous quarter - as well as the finance and insurance sector, and the wholesale trade sector.

The MTI noted that the global economy has remained on a steady expansionary path since the start of the year, with global growth expected to improve slightly this year and the International Monetary Fund upgrading its growth forecasts for some of Singapore's key final demand markets such as the US and the eurozone.

Singapore factory sentiment negative for fifth month as PMI inches up to 48.0 in June

However, uncertainties and downside risks have increased since early 2018, such as the risk of escalating global trade tensions. Against a backdrop of rising global interest rates and tightening financial conditions, "financial vulnerabilities in emerging market economies could surface, particularly for those with elevated debt levels, including in the region", said MTI permanent secretary Loh Khum Yean. If this occurs, there could be a pull-back in investment and consumption growth in these economies, he added.

The MTI said its full-year growth forecast takes into account "the strong performance of the Singapore economy in the first quarter and the slightly improved external demand outlook", barring the full materialisation of downside risks.

Separately, taking questions from the media, Mr Loh said the latest forecast takes into account the results of Malaysia's recent general election and that MTI is "monitoring developments there very closely".

DBS economist Irvin Seah is maintaining a full-year GDP growth estimate of 3 per cent, expecting that manufacturing growth will moderate as global economic conditions normalise, but the services sector will remain strong. 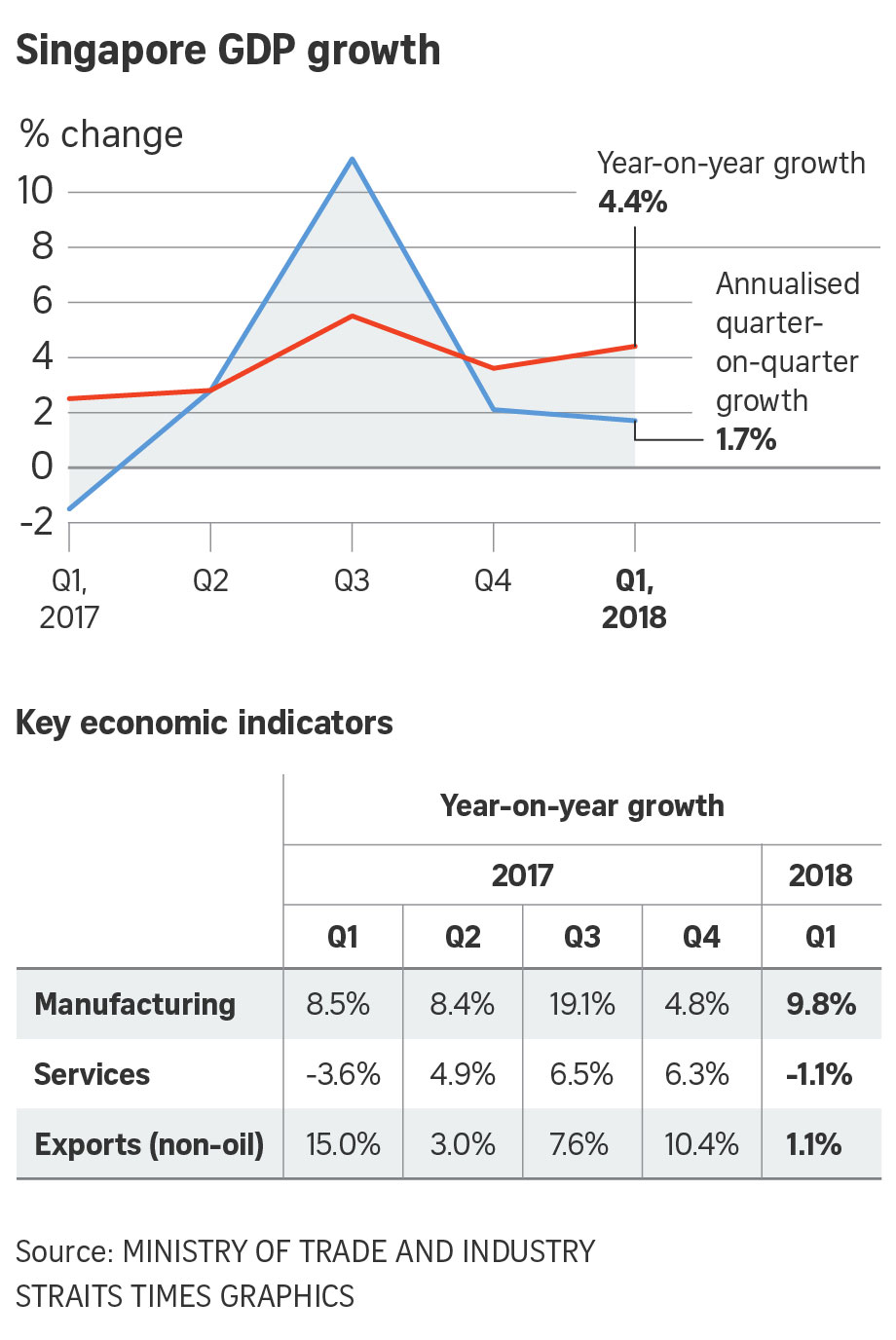 WP: Public housing prices should be pegged to 'objective criteria' like household income

In Aljunied, PAP homes in on residents' welfare; WP focuses on its constructive role in Parliament

[LONDON] Tesco, Britain's biggest supermarket group, has given suppliers until July 10 to agree price reductions as...

EU opens bidding for 1b euros from clean technology fund

[BRUSSELS] Clean technology projects are in line for a billion-euro (S$1.57 billion) slice of support from the...

[LONDON] The volume of convertible bond sales has reached its highest levels since 2007 this year as companies rush...

WP: Public housing prices should be pegged to 'objective criteria' like household income

THE price of public housing should be determined by "objective criteria" rather than market forces, as its...