Ann Williamsann@sph.com.sg
The overall cost of retail items rose by 0.9 per cent in April, lower than the 1.3 per cent increase in March, due to a steeper year-ago decline in the prices of personal care products, as well as a drop in the prices of recreation and entertainment goods.
PHOTO: BT FILE

SINGAPORE'S inflation eased last month, against expectations, due to the slower pace of price increases seen across several major categories of consumer spending.

The consumer price index - the main measure of inflation - edged up 0.1 per cent in April compared with the same month last year, according to Department of Statistics data released on Wednesday.

This was lower than March's 0.2 per cent rise and also below economists' forecast of a 0.4 per cent increase.

The weaker inflation reading was due to smaller increases in the prices of retail items, electricity & gas and services, as well as a steeper fall in the cost of private road transport, the Monetary Authority of Singapore (MAS) and Ministry of Trade and Industry (MTI) said in a joint statement on Wednesday.

Core inflation - which strips out accommodation and private road transport costs to better gauge everyday expenses - dipped to 1.3 per cent in April from 1.5 per cent in March, mainly reflecting lower retail inflation and a smaller increase in electricity tariffs.

The overall cost of retail items rose by 0.9 per cent in April, lower than the 1.3 per cent increase in March, due to a steeper year-ago decline in the prices of personal care products, as well as a drop in the prices of recreation and entertainment goods.

The cost of electricity & gas rose at a more moderate pace of 3.7 per cent in April, compared to 6.2 per cent in the previous month, reflecting a smaller increase in electricity tariffs.

The cost of private road transport fell by 0.8  per cent in April, larger than the 0.6  per cent decline in March. This was due to a decline in car prices on a year-ago basis following a fall in Certificate of Entitlement (COE) premiums, which more than offset a steeper increase in petrol prices. 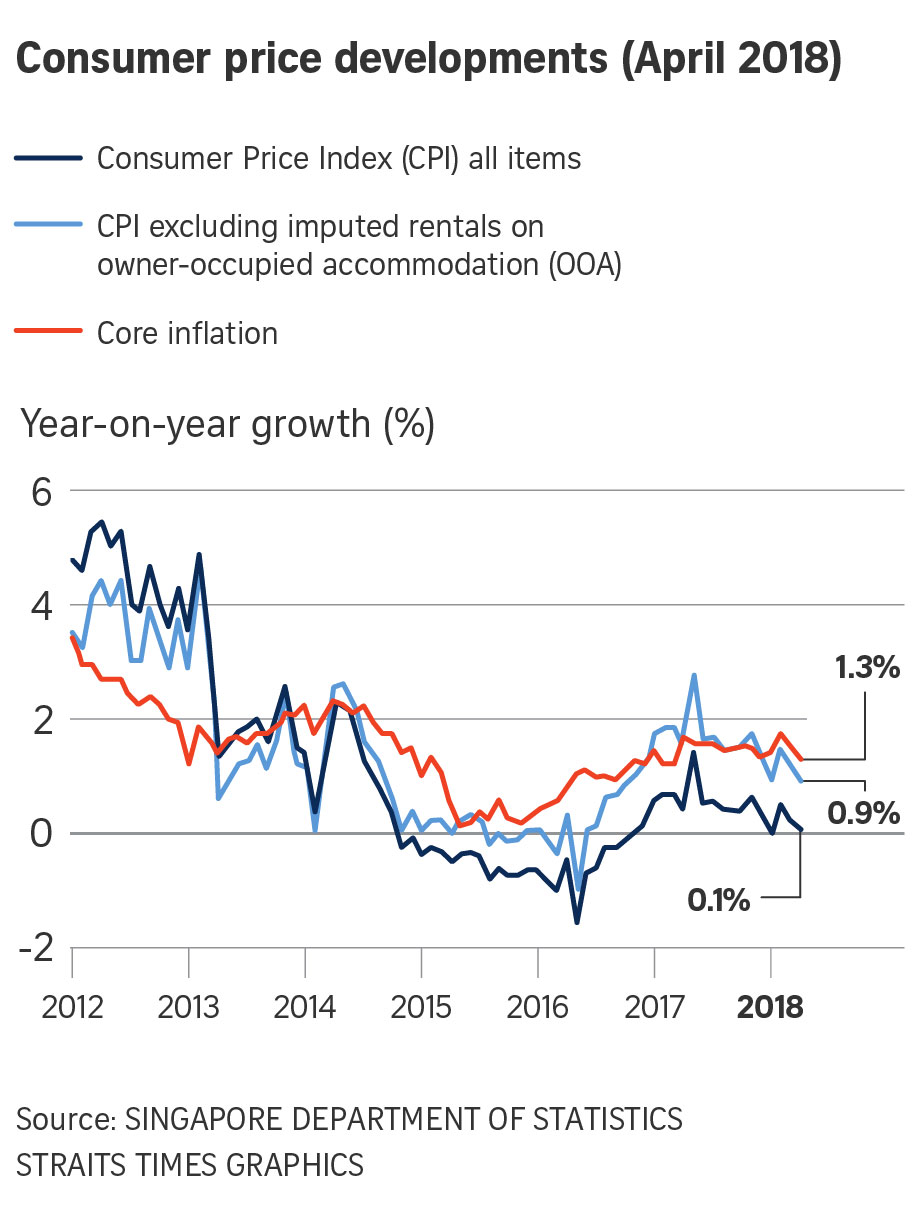 Services inflation eased to 1.3  per cent in April, from 1.4 per cent in the preceding month, as a larger decline in telecommunication services fees and more modest increases in airfares and recreational & cultural services fees outweighed a stronger pickup in holiday expenses.

Food inflation was stable at 1.4  per cent in April, as a faster pace of increase in the cost of prepared meals was offset by a smaller increase in the prices of non-cooked food items.

The cost of accommodation fell by 3.6 per cent in April, larger than the 3.4  per cent decline in the preceding month, as a smaller increase in the cost of housing maintenance & repairs more than offset a slower pace of decline in housing rentals.

They said imported inflation is likely to rise mildly. Global oil prices have rallied since the start of 2018 and are expected to average higher for the full year as compared to 2017. Global food commodity prices are projected to rise slightly as global demand strengthens amid ample supply conditions.

Domestic sources of inflation are expected to increase alongside a faster pace of wage growth and a pickup in domestic demand.

ELD to thoroughly review what went wrong on Polling Day

Britain set to ban Huawei from 5G, though timescale unclear

China to sanction US Senators Rubio, Cruz over Xinjiang

[LONDON] Coronavirus infections rose above 13 million across the world on Monday, according to a Reuters tally,...

G4S to cut over 1,000 jobs as UK cash handling business hit by lockdown

[LONDON] Security services provider G4S said on Monday it would cut jobs in its UK cash business as it struggles...