ITM unveiled to move into new markets, draw investments to high-value add components; Iswaran calls on firms, trade bodies to step up
Amit Roy Choudhurybtnews@sph.com.sg
Industry Minister S Iswaran has called on Singapore firms to stand shoulder to shoulder with the government to transform the electronics sector, one of the cornerstones of the Singapore's economy.
ST PHOTO: LIM YAOHUI

INDUSTRY Minister S Iswaran has called on Singapore firms to stand shoulder to shoulder with the government to transform the electronics sector, one of the cornerstones of the Singapore's economy.

Speaking at the launch of the Electronics Industry Transformation Map (ITM) on Wednesday, the Minister unveiled a two-pronged strategy to ensure electronics continues to grow - by moving into new growth markets and transforming the existing electronics base and attract new investments in high-value components.

The aim is for the industry to achieve a manufacturing value-add of S$22.2 billion and introduce 2,100 new PMET (professionals, managers, executives and technicians) jobs by 2020.

In 2016, electronics manufacturing contributed 4.4 per cent to Singapore's GDP (gross domestic product), accounting for close to S$90 billion in manufacturing output, employing about 70,000 workers. According to the Singapore Economic Development Board (EDB), the manufacturing value-add for the sector in 2015 - the latest year available - was S$19 billion.

The electronics ITM, developed by a multi-agency team together with industry partners, unions and trade associations, was unveiled by Mr Iswaran at the official opening of JTC nanoSpace@Tampines. The facility is purpose-built to meet the operational requirements of niche semiconductor manufacturers. 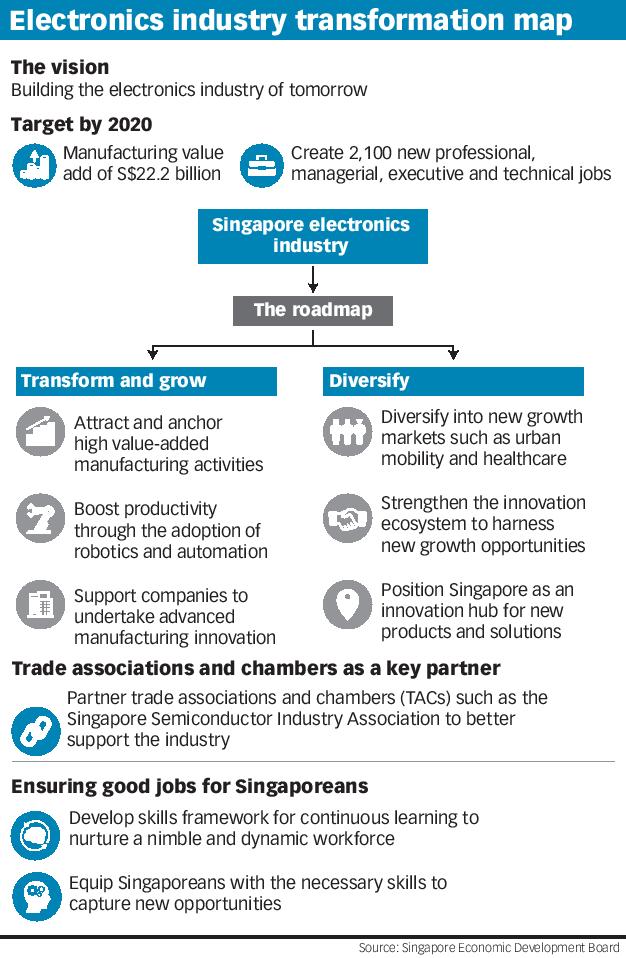 Mr Iswaran believes that if firms and trade bodies step up it will make a big difference to the successful transformation of the sector. He noted that government agencies were working on various upgrading programmes and these can be complemented with individual initiatives at the company level and also by work that is being done by industry associations, like the SSIA (Singapore Semiconductor Industry Association).

"I think this will make a big difference. Because they (the associations) are then able to share best practice and the process of doing things and they will be able to lift the standard of all," he added.

The Minister said with the merger of SPRING and IE Singapore to form Enterprise Singapore, the electronics-related SMEs (small and medium-sized enterprises) and startups can "look forward to better support to develop comprehensive corporate strategies". He added that Enterprise Singapore will complement EDB's role in driving more collaboration between multinationals, innovative startups, as well as large and small local enterprises.

Smooth transition of the two agencies into one "is our utmost priority", Mr Iswaran said.

"Between IE and SPRING they are serving the entire base of companies in Singapore. So it is important that we allow that process to continue untrammelled even as we look at how we can bring the two together for future activities and efforts."

The Minister also announced the launch of the Skills Framework for Electronics which was an integral part of the electronics ITM, developed by SkillsFuture Singapore, Workforce Singapore and the economic agencies, together with industry stakeholders such as employers, industry associations, unions, and the institutes of higher learning.

The Skills Framework identifies emerging skills and competencies for the sector in the areas of robotics and automation, artificial intelligence and data analytics. There are two career pathways - the technical and engineering track, and the management track - covering 29 job roles.

The Minister announced two new professional conversion programmes (PCPs) for the sector, the PCP for Electronics Engineer and the PCP for Electronics Assistant Engineer. These are in addition to the four PCPs already rolled out in 2016 to reskill PMETs for the Wafer Fabrication and Assembly and Test sectors, which have since benefited close to 130 PMETs.

The anchor tenant at the JTC nanoSpace is ams AG, an Austria-based semiconductor company specialising in sensors and sensor interfaces, power management, and wireless. The CEO of ams AG, Alexander Everke, told The Business Times: "ams has grown from 500 to over 6,000 people in Singapore in just 18 months which is a clear sign of how important Singapore is in driving ams' worldwide success.

"We are planning for further growth so our investments into our Singapore operations will continue. At the new nanoSpace Tampines location alone we expect to invest around US$200 million over the next three years."

In another major electronics investment announced on Wednesday, France-based Soitec opened a new wafer line in its existing Singapore plant. The company will begin manufacturing on a new fully-depleted silicon-on-insulator, or FD-SOI, wafer production line, and eventually ramp up the plant to be Soitec's first FD-SOI wafer plant overseas. Soitec is the world market leader for FD-SOI wafers, producing more than 95 per cent of all FD-SOI wafers sold.

Paul Boudre, CEO of Soitec, said the new pilot line launched will see an investment of around US$40 million over the next two years. Eventually the company plans to invest US$270 million in the Singapore wafer plant.