Some call for reversal, others think the unit can continue its climb, given the relief it brings to emerging-market currencies
Cai Haoxianghaoxiang@sph.com.sg@HaoxiangCaiBT
The US dollar's dramatic rise since the US presidential election - with many believing its strength will continue - has prompted some quarters to call for a temporary reversal.
PHOTO: BLOOMBERG

THE US dollar's dramatic rise since the US presidential election - with many believing its strength will continue - has prompted some quarters to call for a temporary reversal.

In the "overbought" camp are analysts from DBS and BMI Research, with the former looking at an "imminent" correction.

DBS said in a Nov 28 note that the "Trump trade" - a term which refers to a bullish greenback and developed-market equities, bearish emerging markets, Asia ex-Japan, gold and US Treasuries - is not over, but looks overdone.

"Our bet is that this trade has to correct before it resumes in 2017 - and that correction is imminent."

US dollar clings to two-month highs

On Friday, a weaker-than-expected set of jobs data could be the trigger to sell the Trump trade, DBS said. Weak jobs data and a tightening of financial conditions due to the strong dollar could prompt the US Fed, due to meet in mid-December, to delay hiking rates, it said.

BMI said in a Nov 28 note that it has a bearish short-term view on the US dollar as it is in overbought and overvalued territory.

Heng Koon How, senior investment strategist at Credit Suisse, told The Business Times that although he sees gradual weakness for the Singapore dollar against the US dollar going into 2017, "it is true that some near-term consolidation is in order". 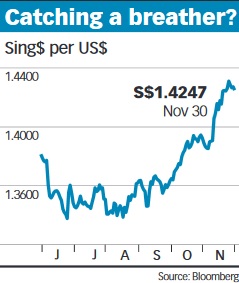 With the Singapore dollar weakening 4 per cent from S$1.385 to the US dollar before the election to S$1.435 last week, regulators here could act to dampen excessive volatility, he said.

But his longer-term outlook for the Singapore dollar remains bearish. "Singapore's frustrating growth slowdown continues and the external outlook remains uncertain," he said. He expects the Singapore dollar to weaken to S$1.45 against the US dollar in three months, and to S$1.48 in a year. "As US Treasuries yields remain high, any pullback in USD/SGD will be shallow, that is, just above 1.41."

James Barrineau, Schroders co-head of emerging-market debt, said he is "significantly underweight" Asian currency exposures relative to benchmarks. "If you believe there's a protectionist kind of threat running through the world right now, who gets hurt the most? It's countries with big current-account surpluses, those much more dependent on global trade - Korea, Taiwan, Singapore." 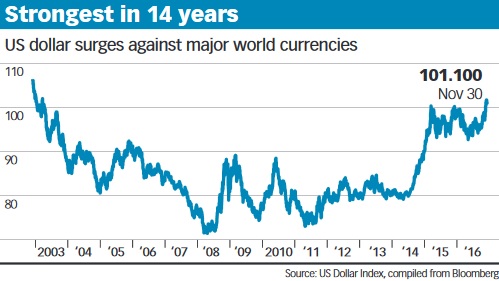 But others say emerging-market currencies and assets, traditionally weak in the face of a strong US dollar, are still worth buying in the medium term.

Kirk West, who heads international offices at Principal Global Investors, said the firm has a "neutral to slightly underweight" view on emerging-market stocks, anticipating volatility in the near term, but with a view to going overweight towards the second half of 2017.

"Similar to how Trump said he's not going to pursue Hillary, we also expect a severe softening in trade rhetoric as well," he said, referring to President-elect Donald Trump's decision against pursuing investigations into the Clinton Foundation and his former political rival Hillary Clinton for her use of a private e-mail server.

Hayden Briscoe, head of Asia-Pacific fixed income at UBS Asset Management, said emerging-market currencies might not weaken as dramatically as they did in 2014 to 2015; he expects the US dollar to strengthen by up to 5 per cent over the next year. He said: "That's nothing. Emerging markets ... are going to get relief coming through with currency depreciation."

In the longer term of around five years, the outlook for the US dollar is less clear, given how a persistent current account deficit in the US might build up, he said. A current account deficit means US consumers are buying more goods and borrowing from overseas than the US is exporting and lending - the result of a stronger dollar, which makes overseas goods cheaper for US residents.

If a deficit arises as foreign-funded government spending on domestic infrastructure leads to increased productivity, it is a positive for the dollar. "But if it's just consumer spending then it's negative," he said, adding that consumers might not be able to finance their lifestyles if their salaries do not go up.

[WASHINGTON] President Donald Trump was sued by his niece Mary for allegedly conspiring with his brother and sister...

Trump jeered as he visits Ginsburg's casket at US Supreme Court

[WASHINGTON] US President Donald Trump was greeted with jeers and boos on Thursday as he visited the late Supreme...

[OSLO] Norway's central bank ruled out an increase in interest rates for the coming years, citing a highly uncertain...

[WASHINGTON] The global economic outlook is less bleak than in June, an IMF spokesman said Thursday, signaling that...

[WASHINGTON] Failure to deliver more government aid to households could precipitate a wave of mortgage defaults and...

China has a new richest person, with Jack Ma dethroned

Even before proposed merger, CCT and CMT have already been diversifying: managers

Gold extends losses to fourth day on US dollar rally

Singapore banking system may be among first to recover: S&P