US loses top spot in competitiveness to Singapore: WEF

The Forum, organisers of the glitzy annual gathering of business and political elite in Davos, have released an annual competitiveness report since 1979 that assesses which economies are well placed to see productivity and long-term growth.

While the report noted that the US "remains an innovation powerhouse" and the world's second most competitive economy, some trouble signs have emerged, the Forum said.

"There are no two ways (about) it. It is important to ensure the countries are being open to trade," said Saadia Zahidi, a Forum managing director, when asked to comment on the impact of the tariffs imposed by the Trump administration.

She noted the lack of "hard data" on the impact of US tariffs imposed on several of its main economic partners, as the set of products impacted remains limited compared to overall trade.

US tells Thunberg to 'study economics' in Davos climate spat

But, she said, "the sentiment" surrounding investing in the US "has been going down," she told reporters in Geneva.

The Forum's competitiveness report relies in part of executive surveys, in addition to hard economic data.

Ms Zahidi said that the US had also fallen in the rankings because healthy life expectancy in the country was now lower than in China. 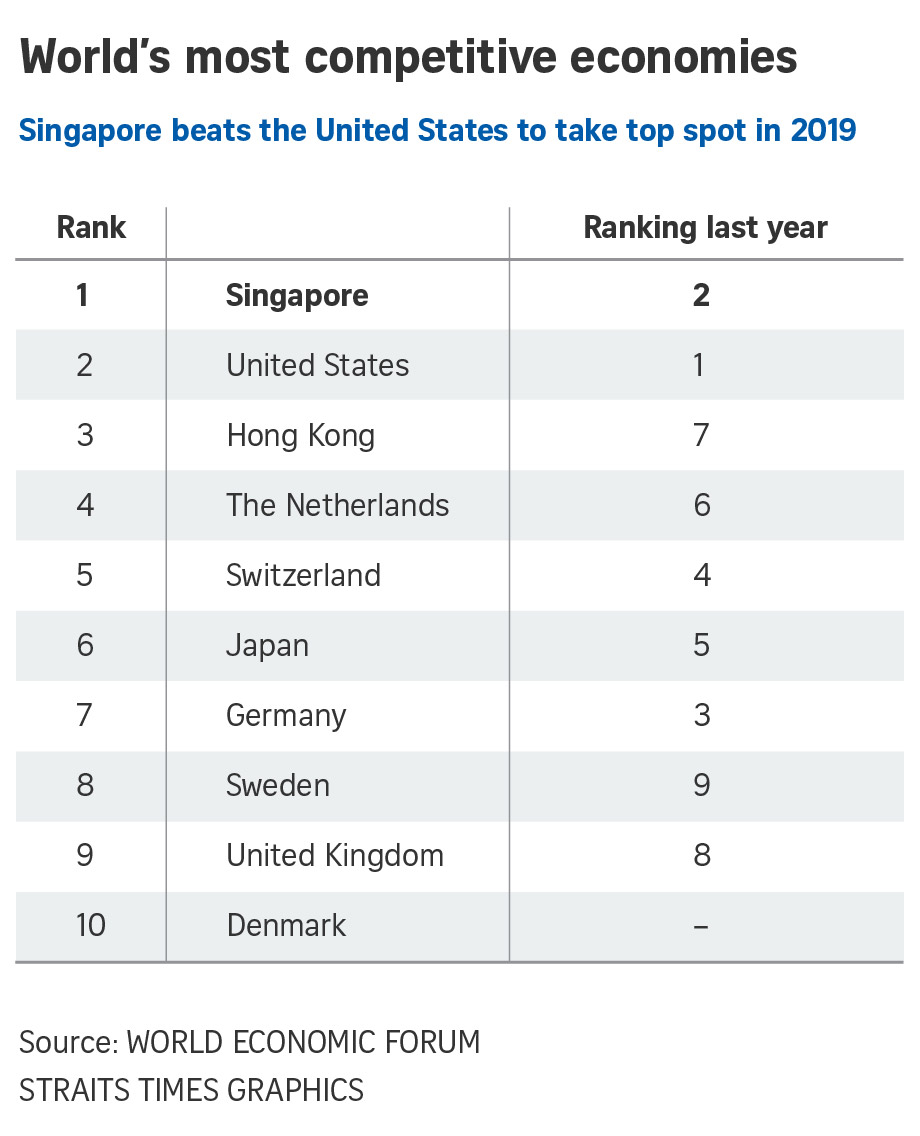 In data published last year, the World Health Organization said that a newborn in China could expect 68.7 years of healthy living, compared to 68.5 for American newborns.

The report measures competitiveness on a scale of zero to 100 based on factors that include infrastructure, health, the labour market, the financial system, quality of public institutions and economic openness.

Singapore scored 84.8 out of 100, but the Forum noted that the country had benefited from trade diversion through its ports triggered by the tariff battles between the world's top economies.

Hong Kong rose four spots to claim third place with a score of 83.1, but the Forum said the data used in the report was collected before waves of pro-democracy protests began shaking the financial hub.

The Netherlands finished fourth - up two slots from last year - while Switzerland came in fifth place.

New China virus 'not as powerful as SARS': health official

CATALIST-LISTED Mary Chia Holdings is proposing a private placement of up to 26.67 million new ordinary shares in...

Rolexes and cars; Lebanese spend big to prise savings from the bank

[BEIRUT] When she heard Lebanese banks would limit cash withdrawals, Rita, a doctor, rushed out to buy a US$10,000...

MAINBOARD-LISTED food and beverage company Del Monte Pacific said it has entered into an agreement for the proposed...

[PARIS] Renault's engineering boss will meet his counterpart at Nissan in Japan this week, two sources close to...