IN WHAT is really welcome news, consumer satisfaction with Singapore's key retail and infocommunications sectors has risen significantly, according to a new survey by the Institute of Service Excellence at Singapore Management University (ISES).

Statistically significant upticks were recorded by the two important sectors in the first three months of the year compared to a year ago. The retail and infocomm sectors were bolstered by improvements in satisfaction levels in the jewellery, fashion apparel, department store, Wireless@SG and broadband sub-sectors.

SMU's Institute of Service Excellence released the CSISG results for the two sectors earlier this month.

An important improvement made in the latest CSISG is the introduction of e-commerce for the first time. Another significant change is that scores for leading brands have been added in the survey as the institute continues to highlight customer staff service in the overall picture of consumer satisfaction.

The institute said that a total of 8,584 locals and 905 tourists were surveyed in face-to-face interviews between January and April 2016 on their satisfaction levels across a basket of retail and infocomm entities which were selected based on a combination of general population study, incidence study and recency of consumer interaction screeners.

Key findings of the survey:

The institute said that within the retail sector, eight sub-sectors were measured. The e-commerce sub-sector was introduced in 2016 to account for changing consumption patterns within Singapore's retail landscape. Another notable change is the inclusion of entities with published scores within the fashion apparel and furniture and electronics sub-sectors.

ISES executive director Neeta Lachmandas says: "We are seeing greater consumption activities being taken online. By introducing an e-commerce sub-sector within the CSISG, we are hoping to glean insights that could help boost the competitiveness of this fast-growing retail segment. This year, we are also publishing the scores of more retailers at a brand level to give recognition to top performers."

The study recorded statistically significant upticks in scores in the jewellery, fashion apparel and department store sub-sectors. Jewellery scored 72.3 points compared to 69.3 points last year, a rise of 2.9 points or 4.2 per cent.

Meanwhile, the fashion apparel category scored 71.9 points compared to 69.3 points in 2015 which translates to a 3.8 per cent gain. Bossini with 74.8 points, Uniqlo with 74.5 points and Hang Ten with 74.0 points were in the top three positions.

The new e-commerce sub-sector scored 71.1 points, with Zalora taking first place with 73.2 points followed by Taobao/Tmall and Groupon with 72.0 points. The top three drivers that had the most impact on increasing satisfaction scores were timeliness of product delivery, fair returns and exchange policies as well as ease of checking out items and payment on site, pointing to the fact that reliability and convenience are top priorities for customers shopping on e-commerce sites.

"In this difficult economic climate, we are seeing service competitiveness being leveraged as a differentiator. Retailers are paying more attention to store ambience, exploring digital innovations, and refreshing their brand strategies to better align with changing consumer profiles," says Ms Lachmandas.

The supermarkets sub-sector scored 71.5 points - up 0.8 point or 1.2 per cent year-on-year, a change that is not considered statistically significant.

Sheng Siong was the only entity with a statistically significant increase in its satisfaction score, an outcome that could be related to the expansion of existing stores and the addition of new stores across Singapore in the last two years.

To account for the recent increase in the number of self-checkout counters deployed across a number of supermarket chains in Singapore, ISES also measured whether the adoption had an impact on customer satisfaction levels. The study showed that satisfaction levels are positively correlated with the ease of making payment.

Chen Yongchang, head of research and consulting at ISES, observes: "Given the manpower-constrained environment that we are operating in, it is heartening to see that the introduction of self-checkout counters at supermarkets has in fact complemented cashiers in facilitating a smooth payment process. Overall, the ease of making payment at supermarkets is the most important driver of satisfaction at supermarkets."

Operators should continue improving on this aspect of the supermarket experience, the institute said.

The remaining sub-sectors including petrol service stations (71.5 points, a rise of 0.8 point or 1.2 per cent year-on-year), motor vehicles (73.1 points, up 0.4 point or 0.5 per cent), and furniture and electronics (71.5 points) did not see statistically significant changes from the year before. 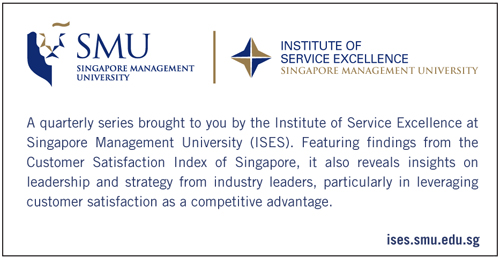 How legendary Palmer teed off with Rolex brand

[LONDON] European stock markets sank at the start of trade on Monday, with the heaviest falls in Italy as alarm...

[GENEVA] The World Health Organization (WHO) no longer has a process for declaring a pandemic, but the Covid-19...

[KABUL] Afghanistan on Monday identified the country's first case of coronavirus as reported cases outside China...

[LONDON] Primark owner Associated British Foods warned on Monday there was a risk of supply shortages on some lines...