Getting to the root of problems

For veteran market researcher Kwan Chong Wah, asking the right questions will help in analysis of problems and finding solutions.
Renald Yeobtnews@sph.com.sg
"A good doctor will be able to ask smart questions and he can then find out the root causes of the problem, and provide treatment accordingly - and that parallels what I do," says Mr Kwan.
PHOTO: AIDAN LOO

FOR market researcher Kwan Chong Wah, a lot of the work he does is akin to that of a diagnostician in a medical clinic.

When clients request for his services, they have typically self-identified a problem and are looking for a solution, says the co-founder and chief executive of Acorn Marketing & Research Consultants, a firm that deals with brand development research, new product development work and problem-solving research.

"It's like going to the doctor, saying you have a fever and asking for a Panadol; a bad doctor will say, 'Sure, here's the Panadol', no questions asked. A good doctor, on the other hand, will say, 'You want the Panadol, tell me - in detail - what the problem is first'," Mr Kwan tells The Business Times.

"After speaking to the doctor, he might say, 'Look, you don't actually need a Panadol, because your ailment can't be cured by one. Your fever is caused by a problem with your eyes, instead'. A good doctor will be able to ask smart questions and he can then find out the root causes of the problem, and provide treatment accordingly - and that parallels what I do."

Oftentimes, says Mr Kwan, the problem isn't really a problem at all, but a simple dose of overzealousness.

"Whenever a client says, look, I need to do this, the first thing I'll ask is, why? And very often, even though they ask for it, their problem doesn't need consumer research. It might be a manpower issue, or a pricing issue, or no issue at all," he muses.

On the other end of the spectrum are enterprises who are unsure - or unwilling - to conduct research.

"A lot of enterprises, they want to keep things confidential, they don't know how to go about conducting research, or they don't know when to introduce the research process," says Mr Kwan.

"From our point of view, it can easily be a one-man job; consumer research is all about observation, understanding and empathy. So, if you're just starting out, keep it in-house; talk to people who can ask the right questions, who can steer you in the correct direction in case you veer too far off the beaten track."

Another way to approach research would be to gather a small, enterprising team and set them loose on a new venture, says Mr Kwan.

"A lot of people think that research is about conducting focus groups, or surveying 500 people. That's not the case. Research is also about looking into what new offerings you can bring to the market."

Communication is a key aspect of the research process as well, particularly if firms are reluctant to spend on research.

Entrepreneurs should be actively engaging in dialogues with the people who use their products or services, says Mr Kwan.

"Let's say you make screws for machinery in factories. Talk to the people at the factory, especially the workers - ask and see if the efficiency of the machine has improved, if the screw is easy to use, if the screw is better than the previous one. That's consumer research already, and really, you can do it by yourself."

So when then, does a professional consultancy such as Acorn step in?

"If you run a business to consumer model, then you might want to consider hiring guys like us, because you are dealing with a mass audience," says Mr Kwan.

For instance, designing a questionnaire to survey your email subscriber list might seem deceptively simple, but that's an art unto itself.

However, there are times when even a seasoned veteran with decades of experience, such as Mr Kwan, can't - or won't - step in.

Using the diagnostician analogy, he says: "Clients start coming in, and they ask for this medication, that medication, because they think they need it. But invariably, they will ask for data analytics. The easy way out would be to say, hey, you're asking for Panadol, let me sell you this Panadol Plus which is double the price.

"But we are not interested in that. Sure, I can sell what you're asking for, but can I ask why you're asking for it in the first place? Sometimes, they insist, and we walk away. That's fine, because they will come back, once they realise that, hey, those guys were right, I didn't need that medicine."

Essentially, people who don't understand the science behind data analytics will want to use it for everything as the term has become a buzzword for being cool and modern, notes Mr Kwan.

He says: "Let's put it this way; when I sit down with someone, I see everything; their expressions, body language, the questions they ask, their reactions to what I say. That's an absolute goldmine of data right there. Contrast that to data analytics, which can't contextualise and empathise.

"What I'm trying to say is, data analytics is meant to be complementary; it's not standalone, it doesn't magically trump every other kind of traditional consumer research there is. It's just that so many people think it does."

"I'm taking a contrarian view on this, because I think everyone is far too invested into digital media, as well. It's not that effective - even if I had a million dollars for marketing, I doubt I'd spend a dime on digital media," he says.

"That is because I have not seen concrete data that suggests digital media to be the optimum platform of communication - it's sexy, but it doesn't build a relationship like conventional media does," he adds.

"Sure, you get a lot of eyeballs, but viewing does not equate to people registering and internalising your product. How can they, with the endless distractions in the digital world?"

As the interview winds down to a close, the hard-nosed, straight-talking researcher has one parting salvo for enterprises.

"Don't take your hands off the steering wheel, don't take your eyes off the road. When you are running a business, you need to keep at it, day in, day out. Talk to your customers, see what's trending in your market, keep in touch with the young.

"If you feel like letting go, then do that - step down.

"Let someone hungrier run it." 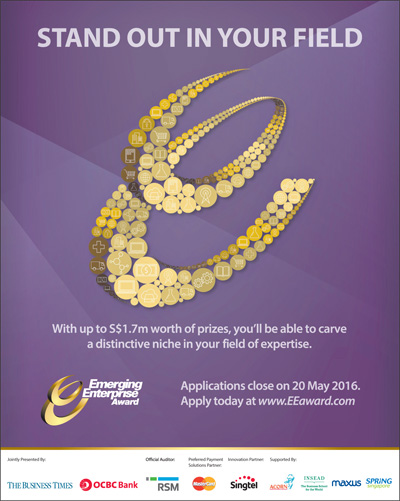 Pushing the envelope with e-commerce

[NEW YORK] New York City has now reopened all its public schools in a milestone for the city's recovery from its...

[LOS ANGELES] The booming world of decentralised finance (defi), which has collected more than US$11 billion in...

US: Wall Street jumps at open on stimulus hopes

[BENGALURU] Wall Street's main indexes jumped at the open on Thursday as investors bet on more fiscal stimulus after...

[BENGALURU] Shares of US airlines rose on Thursday, buoyed by hopes for a second bailout after the Trump...