Lessons for SMEs from startups and the sharing economy

Insead dean Ilian Mihov suggests firms can preempt rivals by disrupting themselves.
Mindy Tantanmindy@sph.com.sg@MindyTanBT
While sustainability and corporate social responsibility are important, they have to be viable in the long run, says Prof Mihov.
PHOTO: ARTHUR LEE

THERE will come a day in Singapore when you can pick up a bicycle at one rack and return it at another. The concept is not new; it is in place in European cities like Paris and Copenhagen and in some cities in China. But neither is the concept of the sharing economy, and yet even as startups embrace this with their evolved business models, Singapore's small and medium-sized enterprises (SMEs) are still lagging.

"A lot of business model innovation is happening in this direction," notes Insead dean Ilian Mihov, citing the example of Uber. "The taxi has existed for a long time; they did not invent taxis. The only thing they invented is a platform for sharing car rides and sharing using the same car not only for yourself but also for others.

"I think that going forward it is completely conceivable that at some point we will get rid of our cars. You go on the street, you take a car, you leave it somewhere else. At the end of the day you have to resolve several issues like how do I pay for this thing, how do I ensure that the car is taken care of, and so on (and) of course there will be people who say, 'I have to ride a Mercedes, I cannot take a Toyota', but I think the majority will be going in that direction."

Business as a force for good

Some of Prof Mihov's faith in the sharing economy stems from his conviction that business is a force for good. It is a multi-faceted argument that he has crafted over time. On the fundamental level, business creation is the key engine of growth and helps lift people out of poverty; by extension and on the macro level, business creation and business innovation are the engines of economic growth helping to move countries from being a developing nation up the ranks to First World.

The perception of business has in recent years become more nuanced, however, with people starting to question the role of business, says Prof Mihov. This is because while there are businesses that are creating value, there are also those that have destroyed value through pollution, corruption or unethical behaviour.

As part of its syllabus, Insead weaves into its curriculum issues such as ethics and decision making, governance, and culture in its endeavour to develop students who not only create value but also preserve, if not enhance, social value.

"We want to make sure that our students, the future managers, not only create value but they also look at what are the social goals, the objectives of this society and how to make sure in this process of value creation they don't destroy too much value for society," says Prof Mihov.

"There are people - more and more of them - who instead of asking the question, 'How do I conduct my business in a way that is consistent with the goals of the society?', they ask the question the reverse way. They ask: 'What are the biggest issues in the society and how can I create a profitable business to address these social issues?'"

And this is where it gets interesting. Insead sees about 1,000 graduates per year between its two campuses in Singapore and Fontainebleau, near Paris. Of this, about 70 to 80 students remain in Singapore.

One such alumni is Tom Lokenvitz whose smove is a car-sharing programme which allows customers to rent electric cars. What sets it apart from the traditional car rental business model is that customers can rent a car from an hour to a full day and they only need to tap their EZLink card to unlock the car.

Another alumni from Insead who went on to create a business centred on sharing economy principles is Frédéric Mazzella. His brainchild BlablaCar connects drivers and passengers willing to travel together between cities and share the cost of the journey - "blabla" because there is an option to indicate how much conversation you want to have during the journey.

Not that all businesses or entrepreneurs need necessarily aspire towards building their business model around sustainability. The important basic step is in creating business, managing the business well, and managing it profitably. That said, businesses that choose to embrace sustainability must ensure that it is, well, sustainable.

Says Prof Mihov: "(The concept of sustainability) is very idiosyncratic at this point - idiosyncratic in that if the culture in the company is such, if the leader, if the board of the company think this way, it is happening. Otherwise it's not . . . Every company tries to put up something . . . (but it is) window dressing to their operations. But again, that's not helpful in the long run."

Prof Mihov is a huge proponent of the idea that the push for sustainability should come from within companies.

"There are companies that are doing it just for the sake of saying we are doing it, we have corporate social responsibility (CSR) and so on. And I think that thinking about CSR and sustainability has changed a lot in the last 10 years. People used to think that it has to be mandatory or even if it's not mandatory, then the public has to punish the ones who are not socially responsible and so on.

"Now, more and more, even the most passionate defenders of sustainability basically say, "You know what, it's very important to think about sustainability and social responsibility and so on, but it's very important to think about how to create business models that are innovative enough so that you can create profitable business out of this.' Because if this CSR is just generating costs, companies are not going to do this willingly . . . My point here is that sustainability and CSR are important things but they have to be internalised and they have to also be sustainable financially. They have to be viable in the long run and not just (companies) trying to tick the box."

Meanwhile, SMEs, whether they are trying to innovate for the sake of evolution or are looking to innovate into a sustainability-focused business, can speed up this process by taking a long hard look at the risks they face.

"Once you do this, then you will see that some of the risks are competitors doing something or inventing something that will drive you out of business. You can look at this risk and say, 'Well, if this is going to disrupt me, why don't I do it myself?'

"I'm not sure what the SMEs are doing here but I would urge them to do something like this because this will give you an idea of rethinking your business model and disrupting yourself before somebody else does it," says Prof Mihov.

Already more and more companies are adopting this method of thinking like entrepreneurs in startup mode, especially as startups have proven that they are able to create value quickly and to disrupt well-established businesses.

And while there is no question that SMEs are the engine of economic growth - Prof Mihov notes that in most developed countries they contribute about half of the countries' gross domestic product and employ between half and three-quarters of the workforce and are also important in that they create value and are the path for creating future big companies - they need to find ways to continue to grow.

"Many companies are now thinking, 'How can I work with the entrepreneurs . . . how do you connect with entrepreneurs so that they can think about your business and then they can help develop innovative ways.' And I think that that is going to accelerate." 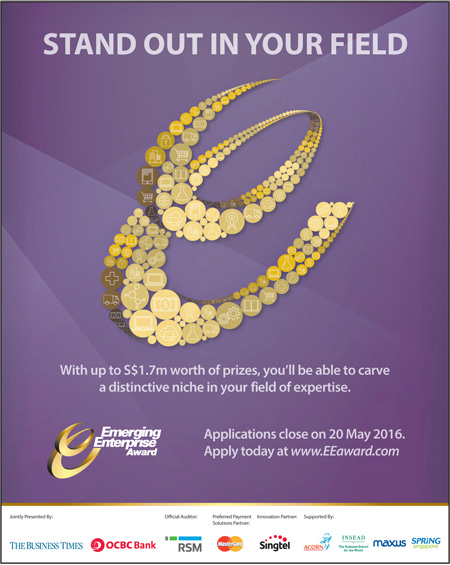 Mini One Clubman review: One for the show

Hackers have infiltrated many of Washington State's agencies

[WASHINGTON] Hackers have launched a sprawling, multifaceted cyber-attack against the state of Washington, according...

[BENGALURU] The number of tests coming back positive for Covid-19 is topping 25 per cent in several states in the US...

[LONDON] The British government is planning to enforce a total social lockdown across a majority of northern Britain...

[WASHINGTON] A federal judge listened to arguments in a rare Sunday hearing ahead of making a crucial decision on...

[WASHINGTON] "I never thought I would have a voice, but this app has given me one and people have been listening,"...

15 new coronavirus cases in Singapore, none in community

The next financial crisis may be coming soon