THE focus on core competencies, the demand for agile corporate decisions, and the dawn of emerging markets around the world have put a spotlight on teams of people working together, collaborating between and within companies.

In other words, collaboration means to "co-labour" together.

A survey published by the Economist Intelligence Unit (EIU) identified globalisation and "atomisation" as two of the most significant business trends over the next 15 years.

According to the survey, companies will both source from and sell into markets across the globe. In an atomised economy, chains of specialised companies will join together to create value.

Both processes require intense collaboration across organisational lines. Both also have the potential to increase revenue and margins. Other trends driving collaboration include the speed of change, the rise of new business models, competitive pressures, and the costs of research and development (R&D).

These factors compel companies to act quickly, access new expertise and do more with less, making it an impetus for partnering with other organisations.

Collaboration is particularly important when moving into unknown sectors of industry.

Even the most international industries like pharmaceuticals, banking and consumer packaged goods have become even more global as the barriers to investing in emerging markets have fallen.

The markets described above - together with China and India, in particular - are taking a bigger slice of the world economy.

Emerging markets - described as countries outside the Organisation for Economic Development and Cooperation (OECD) - will account for more corporate revenue growth between now and 2020 than the OECD economies, according to the EIU's "Foresight 2020" study.

Not only can collaboration help companies save money, it can also help generate better returns, according to a survey by American Express (Amex) on the Australian market.

The survey showed most companies agreed that investment made in collaboration generates a worthy return.

It discovered 69 per cent of small businesses and 61 per cent of medium businesses achieved a return on investment within six months from their most recent collaboration.

The research also revealed that 42 per cent of medium and 21 per cent of small businesses had achieved an ROI on their investment faster than they expected.

The research also indicated that low collaborators were not sought out for partnerships by other businesses - 63 per cent of low/uncollaborative businesses had not been approached to partner in the past three years.

The research also found that the C-suite was primarily responsible for identifying "collaboration opportunities in less collaborative businesses".

After some time in beta release, the company released Dropbox Paper, a collaborative workspace in which users can work on documents together.

"Paper users will now also be able to add due dates and assign owners to tasks, providing teams with even greater project management capabilities within Paper," said a release by Dropbox, describing the added features to Paper after its testing period.

In a survey conducted by market researcher IDC in 2016, it projected that organisations participating in its survey would be able to leverage their use of Dropbox Business to achieve average annual benefits worth US$190,200 per 100 Dropbox Business users (amounting to US$765,200 per organisation) over five years.

"Organisations using Dropbox Business indicated that they have been able to achieve value by saving time and improving employee productivity by putting documents and files at employees' fingertips," said IDC.

"In addition, Dropbox Business has enabled their collaboration efforts through its ease of use as well as specific features that make sharing of information, files and data more efficient and effective, both with external parties and internally between employees."

On a day-to-day basis, employees who used Dropbox Business also benefited from time savings and higher productivity, IDC said, with significant gains seen for employees such as sales staff who work on a mobile basis and require constantly updated versions of documents to do their jobs.

By using collaboration tools, companies can also help to reduce overheads for IT equipment.

Looking at a company's IT infrastructure, servers took the largest slice of the pie, followed by power and maintenance costs.

By using Dropbox's services, companies surveyed by IDC said they could save directly on server costs and improve business outcomes. 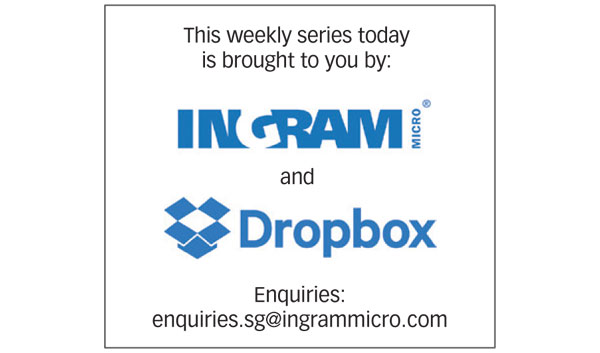