To move past the financial crisis of the 1990s, Asian economies made a host of important structural changes – and Asian fixed income is positioned to benefit. Not only is there growing demand for Asian bonds from Asian investors, but outside investors are looking to the asset class – particularly sovereign debt – for its potential to enhance returns and reduce risk.

The financial crisis that affected Asia in the 1990s scarred both the region and its governments, prompting politicians and policymakers to learn from their mistakes. With structural reforms, tighter regulations and improved capital requirements, their efforts have paid off, and it is becoming abundantly clear that Asia’s economy looks very different than it did just 20 years ago. This is having a profoundly positive impact on the outlook for Asian fixed income.

Demographic challenges are leading to rebalancing and reform

Governments across Asia are starting to focus on building more sustainable structural growth by encouraging economic “rebalancing” and improving household incomes; China in particular has embarked upon a significant long-term rebalancing project, led by President Xi Jinping. The upshot of these efforts is that Asia and other parts of the world are no longer able to depend on China’s explosive economic growth and hunger for commodities, nor on its seemingly limitless supply of low-cost labour. Instead, regional stability will depend on China’s success at reducing systemic risks to its financial system – which it aims to accomplish primarily by controlling the pace of credit expansion (see Figure 1) and by gradually deleveraging its state-owned enterprises, or SOEs.

Figure 1: China’s Pace of Credit Expansion Has Slowed, but Deleveraging Takes Time
Total social debt as a % of GDP; 2007 to 2017 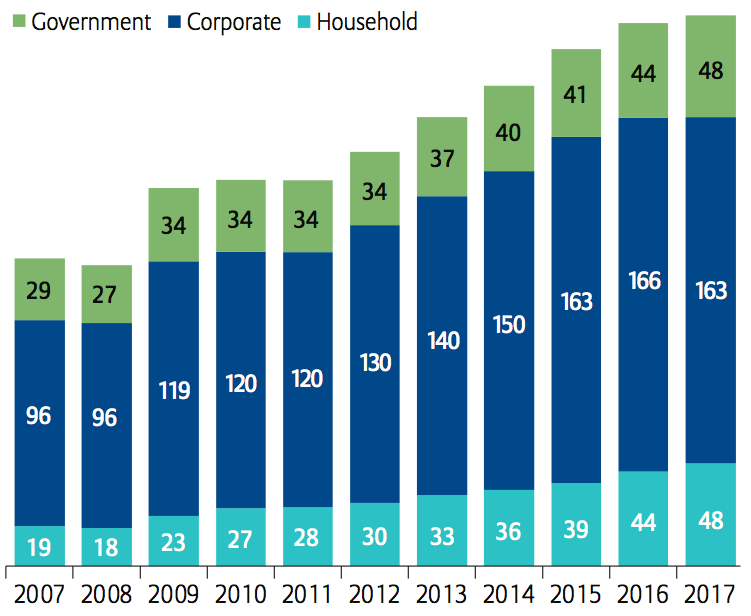 Source: Datastream. Data as at September 2017.

However, China’s vital SOE reforms do not mean privatisation. Instead, China is moving towards greater control of key industries while encouraging more regional competition in non-strategic areas – like services, consumption and technology. As a result, additional economic changes are being felt across the region.

China is expanding its regional reach

Over the coming decades, China will continue to become more assertive while advocating a policy of “inclusive globalisation” – all at a time when the US is becoming more self-centred. President Xi’s “One Belt, One Road” programme and similar initiatives are undoubtedly geopolitical in nature. They are meant to promote the regional development of infrastructure and boost the interconnectedness of trade and people.

If these efforts are successful, Asia will be able to rely less on the US economy and the US dollar over time. Indeed, the US dollar is already becoming less important in global trade transactions: SWIFT banking usage fell from 50 per cent in 2010 to less than 40 per cent in 2017, and it may fall further as China internationalises the renminbi.

Leverage, credit quality and currency reserves have improved throughout Asia

Increasing credit quality. Financial stability, economic reform, improving fundamentals, and lower trade and budget deficits (compared with Europe, Japan and the US) have prompted a number of agencies to upgrade the credit ratings of Asian countries (see Figure 2). 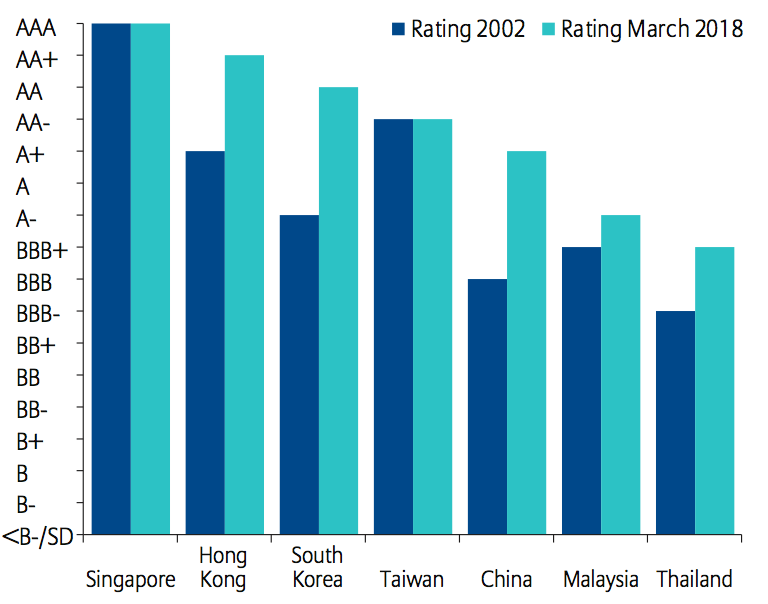 One can see clear evidence of other lessons learned since the Asian Financial Crisis: institutional frameworks have been tightened, and Asian currencies are now free-floating in the markets with little intervention. Healthy currency reserves underpin the value of many Asian nations’ currencies (see Figure 3), and transparent economic policies are now at work. Case in point: Indian Prime Minister Narendra Modi and Indonesian President Joko “Jokowi” Widodo are driving significant structural reforms. Compared with the Western world’s struggles with low interest rates and low productivity, something very different can be seen across Asia: real structural reforms that are re-invigorating economies and allowing the private sector to prosper and innovate.

Asian debt markets have grown bigger and deeper, totalling around 1 trillion in US dollars and around USD 13 trillion in local currencies – clearly avoiding an overreliance on the US dollar. Growth in these markets is being fuelled by Asia’s savers putting their money to work in Asia, not exporting it to the US to finance excessive US consumption. Over time, of course, this balance will change; the US will be forced to save more and spend less as it ages. 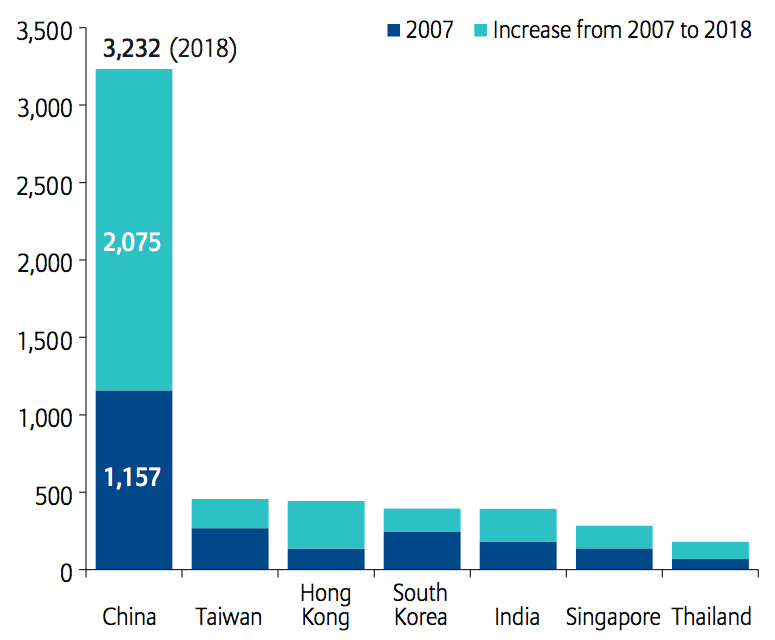 Crucially, Asia has watched many developed economies adopt expensive welfare, health care and pension entitlements – which, while politically popular, have become utterly unaffordable given today’s low interest rates and low growth rates. Instead, many Asian governments have encouraged individual savings through insurance and asset-management products, which will increase the regional demand for more fixed-income investments.

Without the financial albatross of excessive entitlements, we expect Asian sovereign credits to remain well-anchored. Asia’s sovereign bonds will likely be less endangered by rising interest rates and less vulnerable to Western policies of financial repression, which erode the purchasing power of their citizens’ savings.

Asian fixed income looks attractive compared with the US

From an investment perspective, most Asian currencies appear undervalued against their true potential – and especially undervalued against the US dollar, which we expect to see weaken over the next few years. We believe this will prompt more investors to pursue undervalued opportunities in regions with better fiscal fundamentals – a felicitous confluence of events for Asian bonds.

Greater demand for Asian fixed income, both from within and without

With a growing emphasis on individual responsibility for pensions, education and health care, Asia is likely to see growing demand for all types of financial assets – and fixed-income securities top the list. Risk-averse Asian investors may be particularly attracted to the good credit ratings and strong financials of many Asian sovereign bonds.

For global bond portfolios, Asian bonds can be a crucial ingredient. They have the potential to not only enhance returns in US dollars and local currencies, but to help reduce portfolio risk. To that end, we expect the drivers of future returns to be positive, founded on a host of encouraging factors:

With the painful lessons of the 1990s learned, and with solid reforms in place, Asia offers exciting economic growth and investment potential without the distorted monetary policy in effect across much of the developed world. Thanks to China’s rebalancing efforts and its opening-up of currency, bond and equity markets, we expect to see new investment opportunities present themselves to regional and global investors over time. Economies across Asia should be able to generate good corporate prospects, enabling an ever-improving corporate bond market and creating a strong tax feedback loop that could allow governments to fund new investments and create even more attractive long-term opportunities.

[BENGALURU] Tesla Inc has increased prices for its Model S sedan across Europe, with rates varying in different...

[LONDON] British car production slumped by an annual 18.2 per cent in October as the coronavirus pandemic and...

[HONG KONG] Investing products designed to bring hedge-fund strategies to the masses are on course for one of their...

Logistics players ramp up for booster shot from Covid vaccines