Guess what? Meeting attractive girls just got a whole lot easier, using a ride-hailing app
Jacquelyn Cheokbtnews@sph.com.sg
This is an example of how companies should never underestimate the potential of a new product. What they can do is get out there, trial it with diverse users, and request feedback.
PHOTO: KELVIN CHNG

ONLINE dating is a daunting task. But a good friend of mine thinks he's figured out a uniquely effortless way to score dates. Like many others, he's doing it through a mobile app; it's just not one of those that immediately comes to mind, though. Forget Tinder, OkCupid or Coffee Meets Bagel. My friend (call him Al) swears by Grab - yes, that ride-hailing app - to find love.

I learn this over drinks one night. Al is 31, single, a business owner, and drives a nice car. We are discussing his love life, and the girls he's seeing. He says they are nice to spend time with, but he just hasn't met The One, and it's taking him a lot of time. He says he usually finds his dates through Tinder and networking events.

Then he reveals one of the most bizarre things I've ever heard. He says he has discovered what could be the quickest, infallible way to meet girls: through GrabHitch.

This is Grab's carpooling service that is being beta-tested, which allows regular drivers like you and me to give Grab riders a lift, using our cars. In essence, he gives female (and only female) users a ride - and asks out those he finds attractive.

[A quick backgrounder: GrabHitch - unlike GrabCar, UberX or UberPOOL - is not an on-demand commercial service. That is, the private car drivers on the platform provide rides only at their convenience (usually when they are leaving from or headed to the same location as their riders, at about the same time), but still get paid.

Moreover, when a rider requests a GrabHitch ride, the driver is able to see the rider's name and profile photo - and even mutual friends they may have on Facebook if they've both linked their accounts to the social networking site. The driver is able to contact the rider, using the latter's mobile number, only after the booking is confirmed.]

Al tells me he has been using GrabHitch to get to know girls for 4-5 months now. He says: "At first, I wasn't that serious and just wanted to check out the app. But a few months ago, I had a euphoric moment when I realised that it was better than Tinder!" He proceeds to argue his case by listing out points comparing the two services (See table). 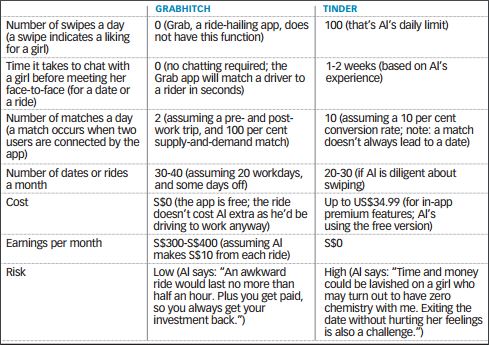 Al shares that he has picked up (pun fully intended) about 20 girls through GrabHitch - five of whom he has asked out and still keeps in touch with. He says the best things about the service are being able to skip all the virtual get-to-know-you, the chance to meet new girls right away, and getting to interact with them in person to determine if there's chemistry. "And guess what?" he exclaims. "You get paid for doing it!"

I remember feeling appalled, and also a bit concerned. Do these girls know what they're getting into? Al assures me it's not as creepy as it sounds, and that most female riders are genuinely open to meeting new people or their neighbours. He says even if they aren't interested in him romantically, he thus expands his network and enjoys some pleasant company on the way to work. He adds: "The girl has the right to remain in touch, or not. It may sound like she's paying for the 'date', but don't forget: this is still a transportation need being met. She isn't paying to get 'picked up'; she's paying to get to a destination. GrabHitch allows two people to get to know each other in a very respectable and subtle way."

Lim Kell Jay, head of Grab Singapore, tells me that socialising is a big part of GrabHitch - but it is also a personal choice ultimately and not the main focus of the service. What GrabHitch wants to do is contribute to a car-lite society, help drivers share the cost of their ride, and offer riders an additional, more affordable option. He says: "It can be 20-40 per cent cheaper than other options like taxis."

Mr Lim adds that an important thing to note is that both the driver and rider can choose whether or not to accept the booking after they have been matched. That is, both of them ride only with someone they're comfortable with. Both also have the option to request same-gender drivers or riders should they prefer that.

I'm somewhat heartened after speaking to female riders I know who regularly use the service. One tells me: "It's not uncommon to have drivers ask to keep in touch after a ride. You feel like you've made a new friend. If I feel uncomfortable, I just politely decline."

Another says she routinely uses Grab's safety features such as "Share my ride" to let loved ones track her ride in real-time, as well as "Driver rating" to "make sure Grab knows whether their drivers are great or not".

Interestingly, a male user of GrabHitch tells me he has never encountered overly friendly advances, from either male or female drivers.

The use of GrabHitch as an express Tinder is disturbingly imaginative, and an example of how companies should never underestimate the potential of a new product. What they can do is get out there, trial it with diverse users, and request feedback.

Only when real customers use the product can they tell you what it can really do: change their lives, let them compete in an entirely different space - or even have the potential for misuse.