2018 new home sales forecast to wilt by a quarter

Yunita Ongbtnews@sph.com.sg@YunitaOngBT
This year's new home sales could be as much as 25 per cent lower than last year's levels, market watchers said, after government data revealed subdued home-buying activity in August as a result of the cooling measures and also the Hungry Ghost Festival.
PHOTO: ST FILE

THIS year's new home sales could be as much as 25 per cent lower than last year's levels, market watchers said, after government data revealed subdued home-buying activity in August as a result of the cooling measures and also the Hungry Ghost Festival.

Developers in Singapore sold 616 private homes, excluding executive condominiums (ECs) last month, a 64.3 per cent fall from the 1,724 units moved in July. The figure was also a 50.6 per cent drop from the 1,246 units booked in August last year, said the Urban Redevelopment Authority (URA) on Monday.

New home sales for the first eight months of the year stood at 6,287 units, 25.1 per cent lower than the 8,397 units sold for the corresponding period last year.

The lower sales volume in August came from lower launch activity as well: During the month, developers launched just 534 units, 23.8 per cent of the 2,239 units in July.

This is because two-thirds of this year's Hungry Ghost Festival fell during August. During this month-long festival, some people hold off on buying property; this year, the festival started on the 11th.

"The impact of the cooling measures (in August) may not be as large as one might think, and likely to only be realised by end-September to October," he said.

The sharp drop in volume for August can also be attributed to the launches of projects such as Stirling Residences, Park Colonial and Riverfront Residences having been brought forward to the night of July 5, ahead of the cooling measures kicking in at midnight. 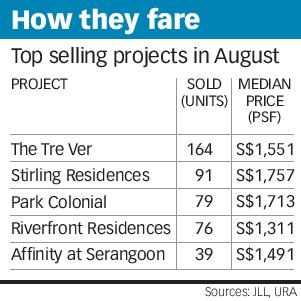 Nicholas Mak, executive director of ZACD Group, said: "Just as the high sales volumes in July... do not reflect the new benchmark for developers' sales, neither do the lower sales volumes in August." He added that the real estate market will take a few months to find a new equilibrium.

But market observers agree that the government measures that resulted in a tightening of Loan-to-Value (LTV) limits and increases in Additional Buyers' Stamp Duty (ABSD) definitely had an impact in August.

JLL's national director for research and consultancy Ong Teck Hui said: "Without a doubt, we would have seen higher August sales volumes this year if not for the cooling measures. Launches would have been stronger, take-up would have been higher."

Going by what buyers chose to purchase, the cooling measures have made them more selective. The five top-selling projects in August (The Tre Ver, Stirling Residences, Park Colonial, Riverfront Residences and Affinity @ Serangoon) accounted for 73 per cent of total home sales in the month.

Compare this to the January-to-June period, when the top five projects captured between 40 and 65 per cent of market share each month, research by Cushman & Wakefield found.

Christine Li, Cushman's senior director and head of research, said buyers may have gravitated to these projects because they viewed them to have better value in terms of reasonable prices and upside potential.

JLL's Mr Ong said: "Looking at those projects that are selling better than others, they are perceived as more reasonably priced and that makes them more competitive in a market that has become price-sensitive."

Tricia Song, head of research for Singapore at Colliers International, said: "We expect home sales to continue to be slow, and to average 600 to 700 units per month for the rest of the year, as prospective buyers and developers adopt a wait-and-see approach following the introduction of the fresh cooling measures." She has predicted the full-year figure to be between 8,500 and 9,000 units.

For the remaining months of the year, launches are likely to continue, although more slowly, said Mr Ong, who pegs full-year sales at 8,500 to 9,500 units.

ABOUT a third of the residential units offered at Normanton Park were sold at an average price of S$1,750 per square...