Kalpana Rashiwalakalpana@sph.com.sg@KalpanaBT
Sales at the 736-unit Queens Peak next to Queenstown MRT station could begin this month.
FILE PHOTO

AFTER a relatively quiet August and September amid an absence of fresh project launches, developers' private home sales are expected to soar this month, possibly to the highest monthly level this year, on the back of a few big new-project launches.

Already Forest Woods near Nex mall and Serangoon MRT station and The Alps Residences in Tampines, both released earlier this month, have sold well; at least one other substantial private residential development, the 736-unit Queens Peak next to Queenstown MRT station, could begin sales this month.

To put things in perspective: Although there were no fresh launches in September, developers still managed to move a decent number of units from earlier project launches.

In all, 509 private homes were sold by developers in September, up 8.8 per cent from the 468 units in the month before; the 509 was also 49.3 per cent more than the 341 units sold in September 2015, going by data from the Urban Redevelopment Authority (URA), which is based on submissions by licensed housing developers.

In the first nine months of this year, developers found buyers for 5,744 private homes, just 1.6 per cent shy of the 5,837 units in the corresponding period last year.

Besides Queens Peak, another major project launch in the offing is EL Development's 752-unit Parc Riviera in West Coast Vale. 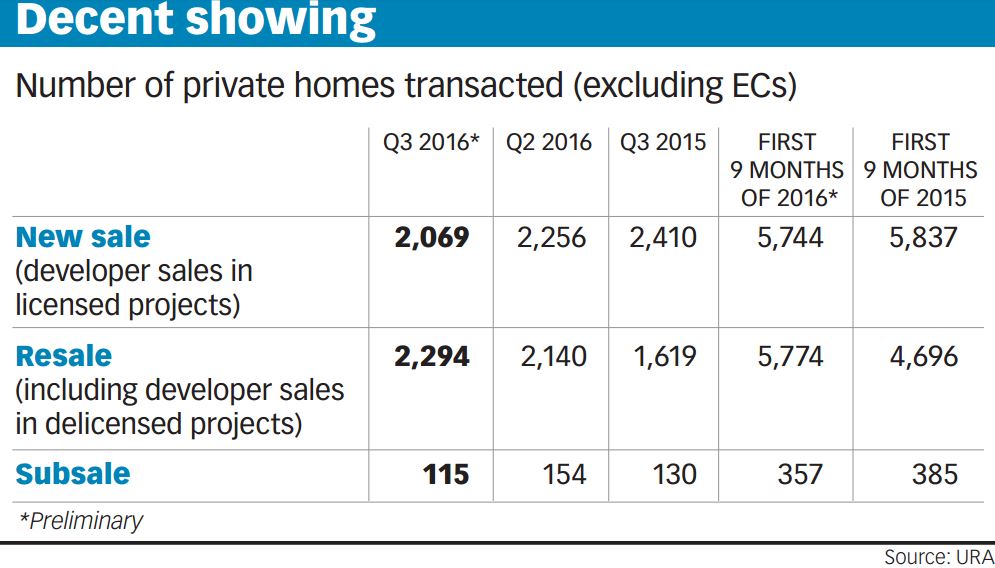 OrangeTee forecasts that developers' sales volume for this month may surpass 1,100 units; if so, this would be higher than in any month so far this year.

The firm's head of research and consultancy Wong Xian Yang said: "Despite the dim economic outlook and falling property prices, buyers are still very keen on new homes as evidenced by recent launches. With the rental market still in the doldrums and interest rates remaining low, demand is gravitating towards buying off-plan in an uncompleted project from a developer, where buyers can put aside worries about the rental market for the time being."

Cushman & Wakefield research director Christine Li agreed, saying: "The stock of unsold units has come down and prices are stabilising. And with lower mortgage rates recently, it seems an opportune time to invest in an uncompleted property, to take a long-term view of the market."

That said, sentiment will be tempered by rising unemployment, she added.

JLL national director Ong Teck Hui said that the current momentum of the market is likely to result in both launches and take-up in the fourth quarter of 2016 exceeding the 1,333 units launched and 1,603 units sold in fourth quarter 2015.

In the segment for executive condominium (ECs), a public-private housing hybrid, developers sold 260 units in September, down 21.5 per cent from the previous month and almost 10 per cent lower than the 288 ECs sold in September 2015.

Treasure Crest in Sengkang was the top-selling EC project last month; 38 units were taken up at a S$746 psf median price.

Analysts credit the improved quarterly EC sales chiefly to more realistic pricing by developers. JLL said the median price of new ECs has contracted 6.4 per cent from S$826 psf in Q1 2015 to S$773 psf in Q3 2016.

CBRE Research's head of Singapore and South-east Asia Desmond Sim noted that there has been strong take-up in existing EC projects in the past few months. "Buyers continue to find value in the EC market as they will be able to take advantage of an expected long-drawn market recovery to capitalise on selling their EC unit after fulfilling the minimum occupation period."

R'ST Research director Ong Kah Seng recalled that following a tightening of rules in December 2013 for new EC buyers, demand for new ECs shrank. This, coupled with mounting EC supply, forced developers to trim average EC prices from S$800 psf in the first half of 2015 to S$780 psf or less in H2 2015. This has helped to spur demand.

For the whole of this year, Mr Lim of ERA expects 4,000 EC units to be sold by developers - up significantly from last year's 2,550 units.

BROADWAY Industrial Group announced on Sunday that it has been served two writs of summons and statements of claim...

HONG Leong Asia has been granted a time extension by the Singapore Exchange (SGX) to release its FY2019 results by...