RENTAL volumes shrank in August for both non-landed private homes and HDB flats compared to July, according to SRX’s latest flash data released on Wednesday.

Meanwhile, rents edged up for condominiums but fell slightly for HDB flats on a month-on-month basis.

However, compared to the five-year average volume for the month of August, last month’s figure was only 1.6 per cent lower.

Condo and HDB rents, volumes up in February: SRX

“This slowdown is within expectation, as rental volume usually peaks in July before tapering off in August,” Ms Sun noted.

“Many foreign expatriates would have renewed their leases or signed new contracts by the third quarter of the year, therefore leasing demand is expected to moderate further as the year-end approaches,” she added.

The smallest proportion came from the priciest units – those above S$10,000 – which accounted for just 1.4 per cent.

Overall rents for condos inched up by 0.2 per cent last month from July, and grew by 3 per cent year on year. Condo rents in August were down 16.5 per cent from their peak in January 2013.

Condos in the core central region (CCR) saw rents going up by 0.3 per cent in August from the previous month, while those in the city fringes or rest of central region (RCR) rose 0.9 per cent. However, in the suburbs or outside central region (OCR), rents dropped slightly by 0.5 per cent from July. 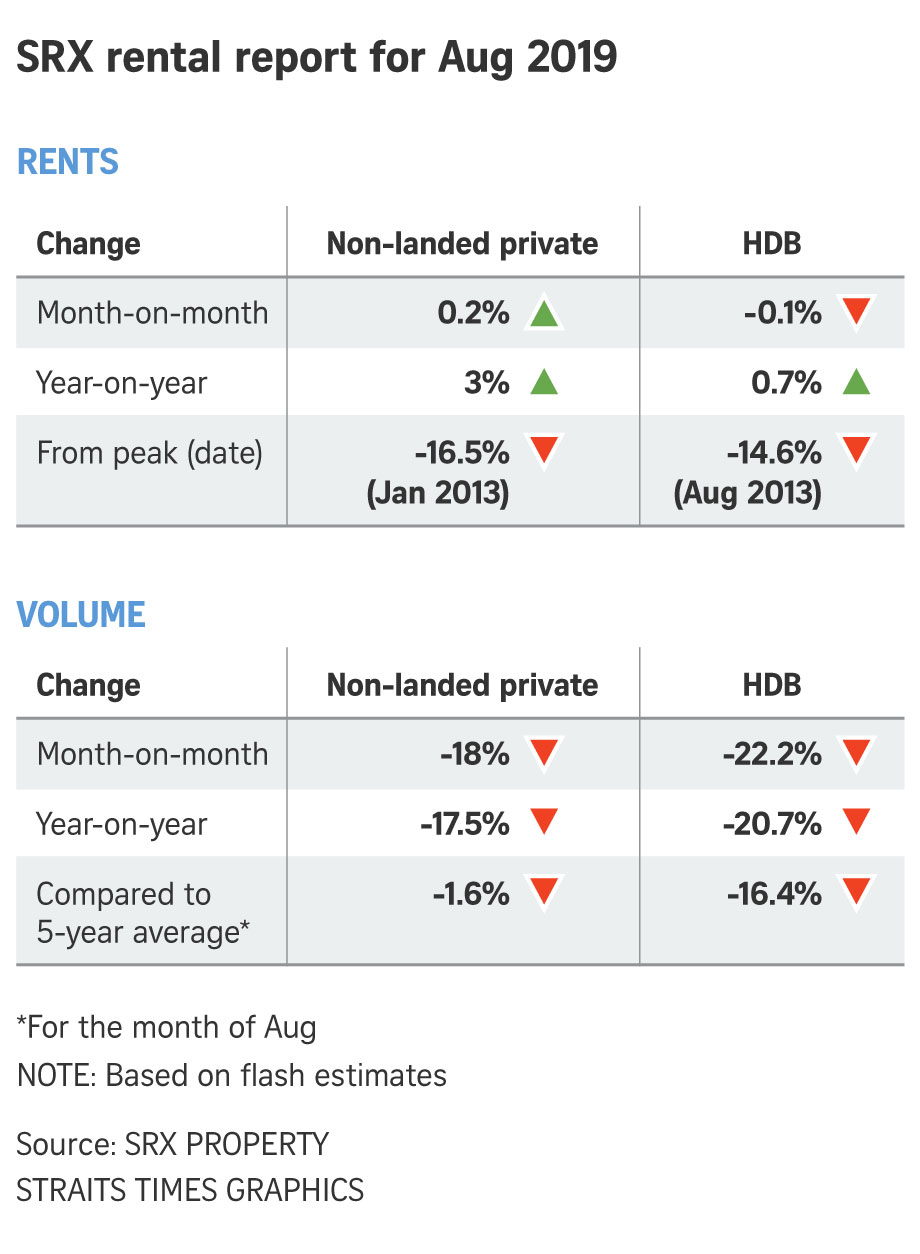 Compared to the five-year average HDB rental volume for the month of August, last month’s volume was a substantial 16.4 per cent lower.

Rents increased for three-room and executive flats in August, up 1.1 per cent and 0.2 per cent respectively from a month ago.

On the other hand, rents fell for four-room and five-room flats, down 0.6 per cent and 0.3 per cent respectively.

Year on year, all flat sizes except for executive flats experienced higher rents in August: three-room flats’ rents were up 2.1 per cent, four-room rents rose 0.3 per cent, five-room rents increased 0.6 per cent, while executive rents fell by 2.2 per cent.

In non-mature estates, rents dipped 0.3 per cent from a month ago, while those in mature estates remained unchanged.

Covid-19: LMIRT to close all malls, retail spaces in Indonesia for 2 weeks

Sino Grandness back in the black with Q4 net profit of 2.6m yuan

DISTRESSED homeowners can soon apply to banks or finance company to defer either just the principal payment or both...

STI has a positive end to its worst quarter since 2008

[COPENHAGEN] What was meant to be a year that blew the wind energy industry well past its previous record for...