Relative affordability and possibility of recovery in the rental market back this expectation: BOS
Lee Meixianleemx@sph.com.sg@LeeMeixianBT
The Singapore housing sector has recently rebounded after home prices fell 12 per cent from the last peak in 2013.
PHOTO: BLOOMBERG

FOREIGN demand is expected to return to the Singapore residential property market this year, Bank of Singapore (BOS) believes.

This is backed by the prospects of a price recovery and better leasing environment, as well as the fact that home prices have fallen to a sweet spot after four years of decline to render the market more affordable compared to other global cities.

BOS head of strategy Eli Lee said in a report last Friday that the recent bullishness in the housing market has so far been largely driven by domestic buyers. But he expects foreign buyers seeking relative value to return and kick the upturn into higher gear, particularly in the prime residential segment.

According to statistics from URA Realis, in 2017 there were only about 1,600 transactions by foreign buyers, markedly lower than the long-term average of 2,200 transactions per year, and the average of 3,600 per year in the last bull market from 2010 to 2013.

OCBC to hire more than 3,000 people this year

They were most likely kept away by the 15 per cent additional buyer stamp duty (ABSD) for foreigners. In terms of percentage of total transactions, only 5.6 per cent of transactions last year were by foreigners, versus a long-term 18-year average of 8.7 per cent.

The Singapore housing sector has recently rebounded after home prices fell 12 per cent from the last peak in 2013. At the same time, household income has improved, resulting in housing affordability - measured by private home price-to-income ratio - falling to a 20-year low. 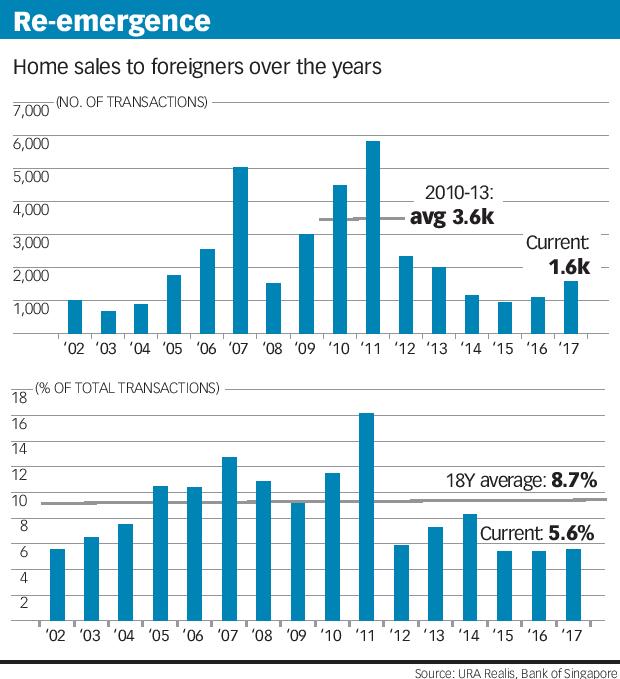 "This stands in contrast to major peer cities such as Hong Kong, Tokyo, Sydney, London and San Francisco, where home prices have instead increased and housing affordability has worsened over the same period. We believe Singapore residential property now presents attractive relative value," Mr Lee said.

As for the rental market, he expects it to bottom out and begin to recover as the annual rate of completions declines by around 40 per cent from 2018 to 2020 due to fewer launches in recent years. Projects usually take three to four years to build.

Rentals have been falling since late 2013 due to physical oversupply in the market, as around 50,000 new units (including public housing) entered the market each year from 2014 to 2016. This exceeded the rate of household formation, and caused vacancy rates to increase from 5 per cent in 2013 to 8 per cent in 2017.

The 40 per cent decline in supply he expects in 2018-2020 will bring the resultant number of units to below the projected population growth figures estimated by the government. In response to this, vacancy rates should drop and drive a rebound in rentals, he said.

Overall, Mr Lee forecasts that Singapore private home prices will rally 3-8 per cent this year, supported by a 5-10 per cent recovery in rentals.

An en-bloc market in overdrive, plus the government's neutral regulatory stance, should provide further momentum, he said.

The high-end residential segment, especially, would find itself the centre of foreigners' interest again, he said. This segment is the most dependent on foreign demand and has suffered the brunt of existing curbs. Prices have fallen so much that their median per square foot prices are now at a 62 per cent premium over mass market condominiums - near a 10-year low.

Coincidentally, on the day the report was released, City Developments also announced that its new development at Leonie Hill, New Futura, sold 18 of the 25 units released on its first day of exclusive private viewings, with two-thirds of the buyers being permanent residents and foreigners.

Lee Nai Jia, research head of Edmund Tie & Co, one of the marketing agents for the project, observed that the buyers were an "eclectic" group of people and "a variety of nationalities", including Chinese, Indonesians and South Koreans.

While he was in agreement on Singapore's relative affordability compared to other regions, and also believes that more foreigners will re-enter the property scene, he was less certain that the weakness in the leasing market will turn around anytime soon.

Yet, weak leasing should not deter foreign demand, he said. "Actually most of the time for the Singapore residential market, buyers don't really buy for the yield, but for the capital appreciation," he said.

High-net-worth foreigners probably also scan the globe comparing where different property markets are in the price cycle. That Singapore is just coming out of a downturn while others such as Sydney and Canada appear to be peaking should benefit the former, he said.

That said, the 15-per-cent ABSD still remains an obvious hurdle for foreigners.

BOS' Mr Lee thinks that the Singapore authorities were ahead of the curve in implementing the stamp duty in 2011 and raising it in 2013, and these measures now in fact appear less onerous compared to, say, Hong Kong and China, which have also incrementally caught up in terms of tightening their residential buying regulations.

But Desmond Sim, CBRE Research head of Singapore and South-East Asia, begs to differ, saying that while mathematically there is value in buying a home in Singapore, psychologically, the 15-per-cent stamp duty remains a real barrier because investors would be afraid of losing out should the measures ever be loosened in the near future.

He still believes though that foreigner demand will increase - "not a major spike but still a slight increase" - and also expects the leasing market to benefit in the short term from displaced residents of en-bloc developments seeking a temporary residence while looking for a new home.

[SINGAPORE] The Law Society (LawSoc) has warned of fraudsters targeting law firms in a scheme to steal funds through...

[WASHINGTON] The United States recorded 55,000 new coronavirus cases in 24 hours on Wednesday, a tally by Johns...

SINGAPORE shares continued to edge up on Thursday, after...