Jump in May home sales lifts hopes for second half

Developers sold 1,121 private homes in May, 53% more than in April and 8% more than a year ago
Lynette Khoo
May's firm pick-up in developers' property sales has prompted consultants to predict a take-off in the second half of the year as more new launches come onstream.
PHOTO: ST FILE

MAY'S firm pick-up in developers' property sales has prompted consultants to predict a take-off in the second half of the year as more new launches come onstream.

While the year got off to a slow start - with residential launches lagging that of last year - developers' sales survey by the Urban Redevelopment Authority for May showed developers sold 53 per cent more private homes (1,121 units) than a month ago or 8 per cent more than a year ago.

This came on the back of a 60 per cent month-on-month surge in launch units in May and a 186 per cent jump from a year ago as developers launched four new projects last month.

Including executive condominiums (ECs) - even though no new EC was launched - developers sold a total of 1,257 homes, 5 per cent fewer than a month ago or 11 per cent lower than a year ago.

"The implication is that sales will have to pick up strongly especially in the second half of 2018 if 2017's new (private) home sales of 10,566 units is to be matched or surpassed," said JLL national director of research and consultancy Ong Teck Hui.

Colliers International head of research for Singapore Tricia Song is among those who believe sales momentum will catch up with more new launches in the second half of the year. 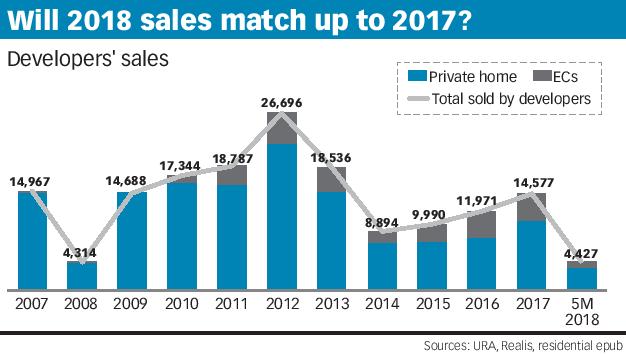 OrangeTee & Tie head of research and consultancy Christine Sun noted that sales of private homes in suburban and city-fringe regions should continue to surge as more mega projects are launched in these regions in the coming months. Last month, the Outside Central Region (OCR) dominated sales, accounting for 71 per cent of new private homes sold in May, up from 60 per cent in May last year and 39 per cent in May 2016.

PropNex Realty CEO Ismail Gafoor is bullish about ongoing appetite from home buyers, upgraders and foreign investors, pointing to launches in April and May where near or above 80 per cent take-up rates were seen at Verandah Residences, Rivercove Residences EC and Twin VEW in a single day.

"Those who were waiting by the sidelines in the last few years are now purchasing units at new launches, sensing that prices might increase moving forward," he said.

JPMorgan property analyst Brandon Lee, however, flagged that there are major events in the second-half of the year that could swing the pendulum in the residential sector.

Firstly, rising mortgage rates might cause marginal buyers, including purchasers of mass market units who are traditionally most sensitive, to take a longer time to commit.

"We understand that most banks have already officially raised their mortgage rates (floating portion) by 30-50 basis points, in-line with spot rates," Mr Lee said. "Our sensitivity analysis shows that mortgage payment and affordability ratio would rise by a respective 7 per cent and 2 percentage points for every 50 basis-point rise in mortgage rates."

He added that two other major events to watch are the sustainability of the en bloc sales cycle and the second-half government land sales programme expected to be announced over the next one to two weeks. Both would determine whether the launch pipeline will be further expanded.

As it is, buyers in the mass-market segment are already sensitive to price quantums. ERA Realty key executive officer Eugene Lim noted that all one and two-bedroom units were sold out at Twin VEW in West Coast Vale by CSC Land Group and property investors still form a significant source of demand.

Those who have received their collective sales money may also split their proceeds to buy two homes, one for occupation and one for investment, he posited.

The two major launches last month were Twin VEW and UOL Group's Amber 45, which sold 87 per cent of 520 units and 62 per cent of 139 units respectively. Their median prices achieved during the month was S$1,385 per square foot (psf) and S$2,378 psf respectively.

Though developers have traditionally avoided launching new major projects during the school holidays, they did shy away this time round. New launches this month included The Garden Residences, Affinity at Serangoon, Margaret Ville and 120 Grange.

Asia: Most stocks down after gains, China growth beats expectations

[HONG KONG] Most markets fell on Monday as investors took a breather following a recent rally, though Hong Kong and...

[FRANKFURT] A global semiconductor shortage is forcing Audi to delay the production of some high-end cars and...

BEIJING, Jan 18 (Reuters) - China's pork output fell in 2020, but recovered sharply from the year before as...

[NEW DELHI] Indian energy demand got off to a shaky start in the new year with sales of transport and cooking fuels...

THE Singapore government is monitoring the developments in the property market "very closely", and will adjust...

The lottery effect - fair or foul?