Price beats expectations; more collective sales in the works, but rising asking prices may be a challenge
Kalpana Rashiwalakalpana@sph.com.sg@KalpanaBT
In the third biggest collective sale in Singapore, Hongkong Land's fully-owned unit MCL Land has clinched the Eunosville site through a collective sale, at a price of S$765.78 million.
PHOTO: ORANGETEE

IN THE third biggest collective sale in Singapore, Hongkong Land's fully-owned unit MCL Land has clinched the Eunosville site through a collective sale, at a price of S$765.78 million.

This works out to a unit land price of S$909 per square foot per plot ratio (psf ppr) inclusive of an estimated S$194 million payable to the state to enhance the intensity of the site to a gross plot ratio (ratio of maximum gross floor area to land area) of 2.8 and to top up the site's lease to 99 years. The site has a balance lease term of about 71 years.

When the tender for Eunosville was launched in April, its marketing agent OrangeTee had stated the asking price was S$643 million to S$653 million - or S$780-790 psf ppr.

Owners stand to receive a gross sale price of about S$2.25 million to S$2.41 million per unit upon the successful completion of the sale, which is subject to several conditions.

These include obtaining approval for a residential redevelopment scheme with 2.8 plot ratio as stipulated for the site in the Urban Redevelopment Authority's Master Plan 2014 as well as the lease top-up.

The deal will also be subject to approval by the Strata Titles Board and if necessary, the High Court. Owners controlling about 81 per cent of Eunosville's share value and strata area have consented to the collective sale, said OrangeTee.

Located opposite Eunos MRT Station, the 376,713 sq ft site is almost rectangular with wide frontage onto Changi Road and Sims Avenue. It is zoned for residential use. A redevelopment could potentially yield about 1,399 units with an average size of 70 sq metres, OrangeTee said.

The tender for Eunosville, which closed on Wednesday, is understood to have drawn eight bids.

OrangeTee executive director of business solutions Marcus Oh said the strong interest and bids received were competitive given the strong location, being less than 100 metres from Eunos MRT Station - which has excellent connectivity to several interchange stations on the MRT network - and proximity to many amenities.

"The primary home sales market has also seen a marked improvement and developers are starting to make strategic acquisitions of land to position themselves for a recovery of the market."

MCL Land currently has two Singapore residential projects on the market - Lake Grande near Jurong Lake (with 98 units unsold in the 710-unit project) and Sol Acres executive condo in Choa Chu Kang, where 112 of the 1,327 units are still available. On the drawing board is a private condo on a Margaret Drive site that MCL bagged last December. 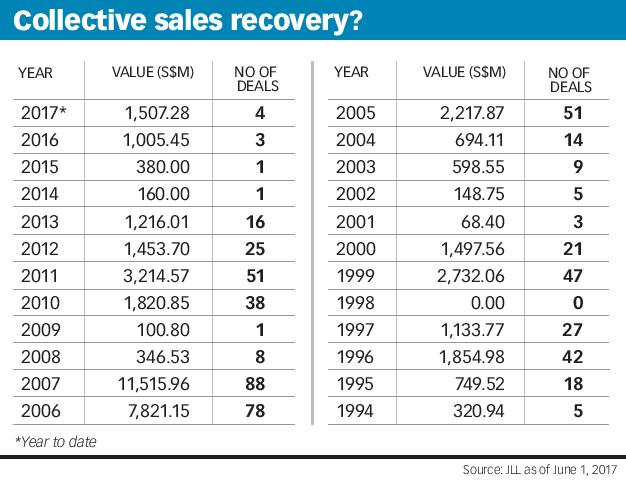 Eunosville is the third biggest collective sale deal here after Farrer Court, which was sold for S$1.3388 billion and Leedon Heights, which fetched S$835 million - both in 2007.

It also marks the fourth collective sale so far this year after One Tree Hill Gardens near Orchard Road, which was awarded to Lum Chang Holdings for S$65 million; Rio Casa in Hougang, sold for S$575 million to a consortium comprising Oxley Holdings, KSH Holdings, Lian Beng Group and the private investment firm of Super Group's Teo family; and the S$101.5 million sale of Goh & Goh Building (comprising apartments and retail units) along Upper Bukit Timah Road to BBR Holdings. All three deals were announced in May.

For the whole of last year, there were three collectives sales - Raintree Gardens in Potong Pasir, Shunfu Ville in Marymount area and Harbour View Gardens in the West Coast area - adding up to slightly over S$1 billion.

In 2015, the solo collective sale transaction was the S$380 million sale of the commercial/residential Thong Sia Building in Bideford Road.

The collective sale fever cooled when the property market tanked during the 2008 global financial crisis though things started to revive again in 2010, when there were 38 collective sales, followed by 51 transactions the following year before activity began to wane again amid a price gap between owners of en bloc properties and developers.

"Between 2014 and 2016, there were 25 collective sale sites launched but only five sold during this period; that suggests that the other 20 sites were priced above what the market could bear," said Tan Hong Boon, regional director of capital markets at JLL.

Moreover, the introduction of the total debt servicing ratio or TDSR framework in late-June 2013 led to a dive in market sentiment and developers' private home sales.

In 2015, however, housing sales began to pick up slightly followed by a further improvement in 2016 - and developers' appetite to restock their landbank improved; that's when they started to feel a shortage of residential sites.

That period also coincided with a scaleback of the Government Land Sales (GLS) Programme in 2016 amid oversupply concerns given last year's record volume of private home completions.

"This shortage of residential sites, whether GLS or private-sector en bloc sales, has heightened competition among the developers for land and encouraged owners in older private housing estates to band with their neighbours and join the en bloc trail," said JLL's Mr Tan.

More collective sales are expected to come on the market this year and next - including Kemaman Point and Boon Teck Tower (both in Balestier), Amber Park, Cavenagh Gardens in District 9 and Brookvale Park near Clementi. Mr Tan said: "We estimate that there are some 25 to 30 existing projects where owners have elected their collective sales committees and are progressing at various stages."

OrangeTee's director of business solutions Alex Oh said: " We are receiving a lot of enquiries from owners, but as the discussion proceeds, their price expectations keep going up.

"It will be relatively easy to get the minimum 80 per cent consent from owners but may be tougher to sell some of these sites to developers. We'll also have to keep track of the H2 2017 GLS Programme. If the government increases its land supply, developers' attention will be diverted from en bloc sales - as buying GLS sites is more straightfoward and faster."

Disney's 'Mulan' to skip most movie theatres for streaming

[LOS ANGELES] Walt Disney's live-action epic Mulan will skip most of the world'...

[LONDON] Virgin Atlantic Airways is on track to agree and implement a successful £1.2 billion (S$2.15 billion)...

[CHENNAI] Less than a week after winning the FA Cup to secure their place in next season's Europa League and as they...

[BENGALURU] Wendy's saw its sales recover in June and July as several US states eased lockdown restrictions, after...

[BENGALURU] Moderna said on Wednesday smaller volume agreements for its experimental coronavirus vaccine have been...