Proposed strata rule changes a nod to governance and transparency

Lynette Khoo
Proposed changes to the law that governs the management and maintenance of strata properties here were announced on Wednesday, aimed at improving the governance and transparency in the management of strata-titled developments, and providing greater clarity to existing provisions.
ST PHOTO

Key proposed changes to the Act

PROPOSED changes to the law that governs the management and maintenance of strata properties here were announced on Wednesday, aimed at improving the governance and transparency in the management of strata-titled developments, and providing greater clarity to existing provisions.

Chief among the proposals is a cap on the number of proxies one can hold during a general meeting, to prevent abuse by those who garner proxy votes to influence decision-making; allowing management corporations - commonly known as MCSTs (Management Corporation Strata Title) - the option to pay honorarium to council members; and defining what constitutes common property.

One other proposed change seeks to allow owners to install safety grilles to protect children where there are no design guidelines for the development.

Market watchers note that amendments to the Building Maintenance and Strata Management Act (BMSMA) will help to remove ambiguities in existing provisions and address recurring issues that cropped up in past disputes between MCSTs and owners of strata units.

Melvin Chan, TSMP Law Corporation's head of litigation and dispute resolution, said: "These proposed changes tighten up the way the MCST is run. They also codify what has been stated by the Court in past disputes.

"Some areas that were unclear and subject to the discretion of the MCST have become clearer," he added.

Lee & Lee's senior partner for litigation and dispute resolution Toh Kok Seng felt that the proposal to limit the number of proxies for each person to either 2 per cent of total lots in a development or two owners - whichever is higher - is a step in the right direction. This would make it harder for a single owner to collect numerous proxies to out-vote others.

Eleana Teo, managing director of Knight Frank Property Asset Management (strata management), however, is concerned that some owners may still game the system by redistributing the proxies to more persons.

She flagged that one proposed amendment that may affect developers is the requirement for them to seek the approval on the amount of maintenance charges before selling any strata lot.

While this may provide more clarity for property buyers, it is not easy for developers to accurately estimate the actual maintenance charges for projects to be completed two to three years' later, having to factor in wage inflation, said Ms Teo.

But this proposed change to the Act is not without reason. Mr Toh said he has lately come across cases where buyers are upset that the actual amount of maintenance charges they are made to pay is significantly higher than the estimated amount at the time of purchase.

CBRE associate director for asset services Serene Koh felt that the Act then has to address how the approved maintenance fund can be adjusted, if it turns out to be insufficient.

She felt that there could also be more clarity on other sections of the Act. For instance, the Act is silent on how potential income from common areas can be used to offset operating expenses and reduce the contribution to the maintenance fund.

"Such income, particularly from car parks in commercial developments, can be a substantial amount," she said. 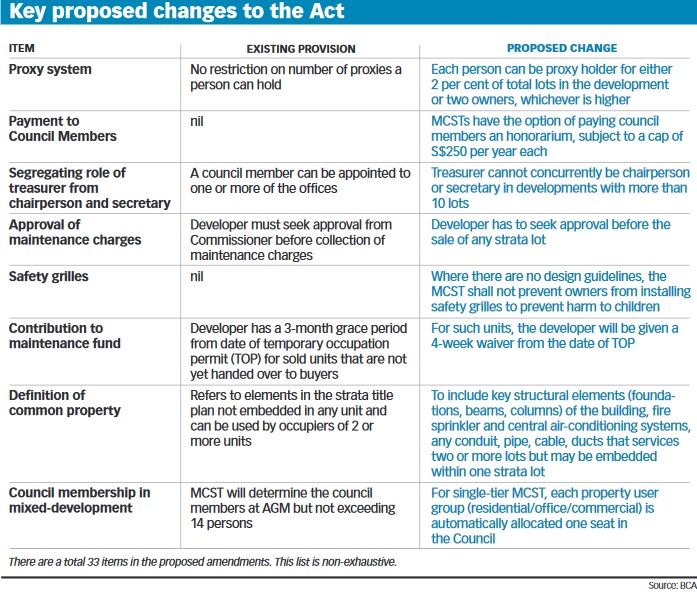 Industry players generally welcome the proposed definition of "common property" in the BMSMA to include key structural elements of the building, following court cases in recent years that took issue with the ambiguity of the current definition.

One case saw the management corporation of Highpoint in Mount Elizabeth taking a couple to the Strata Titles Board (STB), after they claimed they were not responsible for repairing cracks in the ceiling above their kitchen and bedroom toilet. The High Court ruling later clarified in 2014 that condo unit owners are not responsible for repairing defects in structural beams above their properties.

The proposed provision for owners to install safety grilles in their units is also widely hailed by industry players, given the several skirmishes between the MCST and residents when the residents were prevented from installing safety grilles to prevent harm to children.

Mr Toh noted that it is necessary to make this clear in legislation, as there are still MCSTs that refuse to allow safety grilles in balconies, even though the STB had ruled in the case of One North Residences in 2015 to allow an owner to install safety grilles in his balcony, and public opinion that supports putting safety ahead of appearance.

Lee Liat Yeang, senior partner at Dentons Rodyk, noted that it is progressive to adopt the proposed amendment to allow strata rolls to be kept in electronic forms, and to allow notices to be served by electronic mail. "This will enable timely dissemination of information. It is also interesting to allow audio/virtual conferencing for Council meetings," he added, citing increased reliance on technology to facilitate communication.

In all, a total of 33 items were listed in the proposed amendments to the BMSMA. A spokeswoman from the Building and Construction Authority (BCA) on Wednesday told BT that these amendments are proposed as part of BCA's regular review of the legislations to ensure that they are relevant to current needs.

This will mark the first revision to the Act since the BMSMA came into force in April 2005. A final public consultation round, which followed two earlier rounds since 2012, will end on Feb 21.

BCA said it has sought the views of stakeholders such as the industry associations, developers, lawyers, academics, managing agents, subsidiary proprietors and council members of MCSTs. It is gathering further feedback on the consolidated list of amendments before finalising the legislative changes. The effective date of the amendments will be announced when the draft Bill is tabled and read in Parliament.

"As the BMSMA has a wide impact on strata-titled developments, there was a need to carry out a comprehensive and robust review, providing all stakeholders the opportunity to give feedback, comments and suggestion on changes needed to improve strata living," the BCA spokeswoman said.

CATALIST-LISTED Advancer Global has pointed to miscommunication as the reason for its failure to disclose that its...