They will rise by 6-29% for the next half year, and may crimp premiums that owners can get
Judith Tanbtnews@sph.com.sg
With collective-sale fever heating up in Singapore, the development charge (DC) rates for non-landed residential use has been raised by a sharp 13.8 per cent on average.
PHOTO: ST FILE

WITH collective-sale fever heating up in Singapore, the development charge (DC) rates for non-landed residential use has been raised by a sharp 13.8 per cent on average.

DC rates went up in 116 of the 118 geographical sectors by between six and 29 per cent, with the biggest increase of 29 per cent applying in Tampines Road, Hougang, Punggol and Sengkang.

Developers pay a DC for enhancing the use of some sites or if they want to build bigger projects on them.

Analysts say the hike is no surprise, given how bullish land prices paid by developers have been in the last six months.

Fifteen residential estates are going through or have been put up for collective sale so far this year; of the 15, seven have been successful.

Executive director of research consultancy ZACD Group Nicholas Mak noted that this was the highest average increase since September 2007, when the average increase was 57.8 per cent. "The latest round of increase in the DC for non-landed residential properties could temporary cool the en bloc sale fever. Depending on the location, the increase in DC could have a greater impact on the en bloc sale of 99-year leasehold projects, as it can increase the charges payable by developers for increasing the floor area of the new development, as well as for topping up the 99-year lease of the land.

"As a result, some developers would offer lower prices to acquire older 99-year leasehold properties collectively. This could discourage some owners of such properties from putting up them for collective sale," he said.

JLL Singapore head of research and consultancy Tay Huey Ying said the raise "is within our expectations as there has been a spike in demand for residential development land".

In the year to date, more than S$7 billion in residential-development sites in the public and private domains have changed hands, surpassing the S$4.32 billion amassed for the whole of last year, she said.

The active collective sales market between March and August was a key contributing factor, accounting for almost two-fifths of the more than S$7 billion, she noted.

Ms Tay said that, arising from the intense competition for land, the prices achieved for these sites "consistently exceeded their corresponding land values derived from the March 2017 DC rates by 10 per cent to 79 per cent". For example, the sale price achieved for the collective sale of Rio Casa, a condominium in Hougang Avenue 7, lends support to the DC being raised by 29 per cent for the geographical sector that includes Hougang. "The estimat d land price of S$709 per square foot per plot ratio price (psf ppr), inclusive of fees for land-use intensification and lease upgrading, was 66 per cent above the implied land value for the sector," she said.

Ms Tay also cited the en bloc sale of Eunosville, which raked in the highest premium of 79 per cent. It was transacted at an estimated S$910 psf ppr, inclusive of estimated fees for land-use intensification and lease upgrading. The DC rate for this sector was raised by 28 per cent, the second highest adjustment rate in this latest review.

Karamjit Singh, senior consultant at JLL, added: "For the collective sale deals that we are working on currently, the increase in DC is not a deal breaker, but it does shave off some of the premium that owners stand to receive."

The Ministry of National Development (MND), in consultation with the Chief Valuer (CV), revises DC rates twice a year, on March 1 and Sept 1. The rates are based on the CV's assessment of land values and take into consideration recent land sales and other property transactions.

The rates are stated according to use-groups across 118 geographical sectors. These rates are also up for commercial and landed residential uses - at an average of 3.8 per cent and 0.3 per cent respectively. 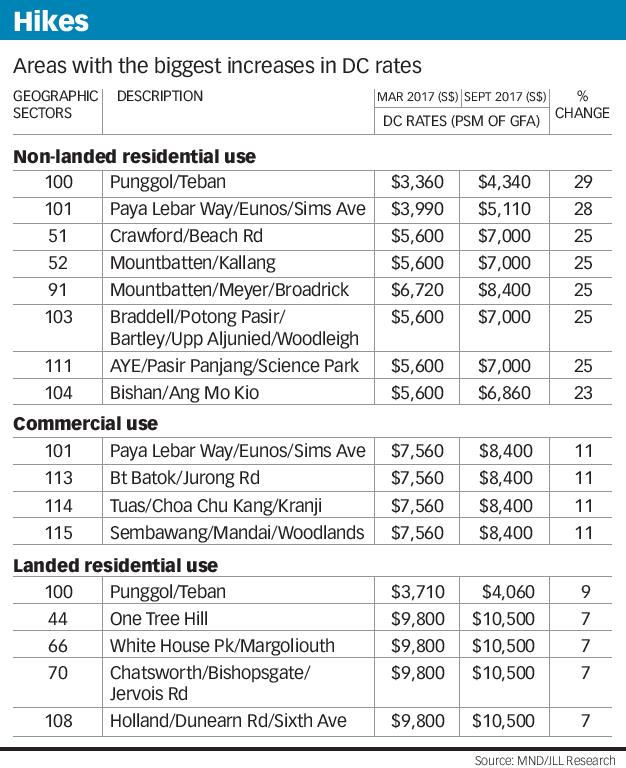 Cushman & Wakefield's research director Christine Li said in the first half of this year, the total commercial and residential transactions recorded S$6.9 billion and S$6.2 billion, reflecting a 23 per cent and 130 per cent rise respectively. "Analysis by Cushman & Wakefield Research showed that developers paid an average of 29 per cent premium over comparable sites for the first five months of 2017, a marked increase when premiums were sub-zero in late 2015 and early 2016.

"The increasingly bullish bids by developers in recent land tenders is a testament that home prices are likely to increase when these projects reach the market," she added.

MND said on Thursday evening that DC rates remain unchanged for industrial use. They are also unchanged for hotels/hospitals, place of worship/civic and community institutions, and three other use groups.

[LONDON] British house prices rose in January at their fastest annual rate since November 2018, adding to signs of a...

[SEOUL] South Korean shares gained on Wednesday, as investors picked up beaten-down stocks after the index fell by...

[SINGAPORE] PetroChina's Singapore bunkering unit moved up a notch to be the top marine fuel supplier in the world's...

[BENGALURU] Gold prices were little changed on Wednesday after falling 1 per cent in the previous session, as...

[LONDON] British Airways (BA) has suspended bookings on its website for direct flights from London to Beijing and...