SIM Lian plans to develop a condo with more than 2,000 units on the Tampines Court site which has been awarded to it for S$970 million.

At S$970 million, this is the second-largest collective sale in dollar quantum after Farrer Court, which went for S$1.3388 billion back in 2007. 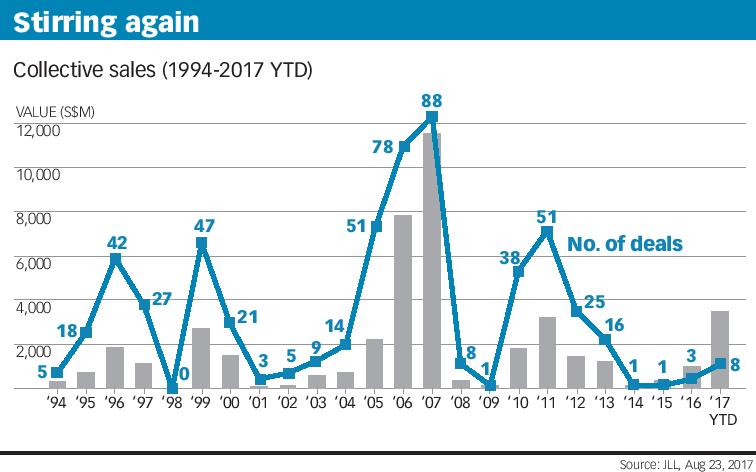 Inclusive of Tampines Court, eight collective sales totalling S$3.48 billion have been inked so far this year, surpassing the three deals worth a tad over S$1 billion for the whole of 2016, based on JLL's figures.

Huttons Asia brokered the collective sale of Tampines Court, which is near Simei MRT Station. The tender closed on Aug 15 and was awarded on Tuesday night.

The property agency's head of investment sales, Terence Lian, estimates that the S$970 million price translates to S$676 per square foot per plot ratio inclusive of an estimated S$359 million that Sim Lian will have to pay to the state for differential premium (based on the current March 1, 2017 development charge or DC rates) and lease upgrading premium for topping up the site's lease to 99 years from the current balance lease term of 69 years.

The differential premium is payable for enhancing the intensity of the site to a gross plot ratio of 2.8.

The S$970 million price achieved for Tampines Court exceeds the reserve price of S$952 million in the collective sale agreement inked by the majority owners of the privatised Housing and Urban Development Company (HUDC) estate.

Owners controlling about 83 per cent of Tampines Court's share value and strata area have agreed to the sale so far.

Tampines Court is on a 702,164-sq-ft sprawling site. Based on the site's 2.8 plot ratio under the Urban Redevelopment Authority's Master Plan 2014, the site can accommodate a maximum gross floor area of nearly 1.97 million sq ft.

"This, combined with the fact that new MRT stations are coming up in the Tampines area, will attract more residential property buyers as well as enhance the investment proposition for the area," he added.

The group is making the acquisition through Sim Lian (Treasure), a joint venture between Sim Lian Development and Sim Lian Land. The group will also handle the project's construction. "We're looking at a 12-storey project with easily over 2,000 units, ranging from one-bedders to four or even five-bedders," said Mr Kuik.

The group does not have any undeveloped residential land bank in Singapore. It has developed a range of housing projects in Tampines - The Premiere and Centrale 8 DBSS (Design, Build and Sell Scheme) projects for the Housing & Development Board, The Tampines Trilliant executive condo development and Waterview, a private condo.

A market watcher estimated that after factoring in an anticipated hike in DC rates come Sept 1, 2017 and other costs, Sim Lian's breakeven cost could be around S$1,200 psf.

The collective sale will be subject to approval by the Strata Titles Board (STB) and if necessary the High Court - unless unanimous approval from owners is obtained.

The property and construction group will have to finish developing the new project on the site and selling all of its units within five years from the collective sale order granted by the STB or the court - as part of the conditions for upfront remission of the 15 per cent additional buyer's stamp duty on the land price.

This is the third attempt at a collective sale at Tampines Court. The maiden effort for S$405 million was dismissed by the STB in 2008. A second attempt in 2011 failed to garner the required consent level from owners, according to earlier articles.

[DUBAI] Two Iranians have died in hospital after testing positive for the new coronavirus in the holy Shi'ite city...

[WASHINGTON] Bernie Sanders has surged to a double-digit lead over his rivals in the race for the Democratic...

Producer prices in US rise more than forecast on services

[WASHINGTON] A key measure of US producer prices rose more than forecast in January, suggesting some inflationary...

GOVERNMENT-LINKED landlord CapitaLand said on Wednesday that it's been running a free parking promotion at its malls...

[NEW YORK] Nasdaq hit an all-time high at the open on Wednesday on signs of slowing coronavirus infections and...