Lee Meixianleemx@sph.com.sg@LeeMeixianBT
Singapore monies that went into overseas real-estate investments last year rose by about 40 per cent to a record US$28.4 billion, up from US$20.4 billion in 2016 and upending the last high of US$27.6 billion in 2015.
PHOTO: REUTERS

SINGAPORE monies that went into overseas real-estate investments last year rose by about 40 per cent to a record US$28.4 billion, up from US$20.4 billion in 2016 and upending the last high of US$27.6 billion in 2015.

Sovereign wealth fund (SWF) GIC had a hand in all three of Singapore's largest outbound property deals in 2017, according to data from Real Capital Analytics, which includes both investments in stabilised properties and undeveloped land.

Sigrid Zialcita, managing director of research for the Asia-Pacific, noted that Singapore was 2017's fifth largest source of capital globally, after the United States, Hong Kong, China and France. Singapore was in sixth place in 2016.

The city-state also emerged as the largest Asian investor in the US, surpassing the combined total from Chinese and Hong Kong firms.

In 2017, Singapore-based investors ploughed US$9.5 billion into the US real estate markets, compared to the combined US$7.3 billion that their Chinese and Hong Kong counterparts spent there.

Globally, Singapore was the third largest spender in US real estate, on the heels of Canada and France, which invested US$17.2 billion and US$11.6 billion there in 2017.

But while foreign investment has tended to focus on trophy office, hotel and residential properties in the central business districts (CBD), Singapore-based investors homed in on industrial, suburban multi-family assets and niche asset classes such as student housing and data centres.

Other than the major metropolitan areas which received the bulk of the investment, Singapore-based capital also entered secondary and tertiary US markets.

Examples include Mapletree Investments' purchase of an office building in the Minneapolis CBD for US$258.5 million, and other investors' portfolio acquisitions of data centres and student accommodation across the US.

David Bitner, Cushman & Wakefield's vice-president and head of capital markets research for the Americas, said Singapore-based investors are targeting assets which are supported by strong secular drivers, and are entering markets which are offering attractive relative value. 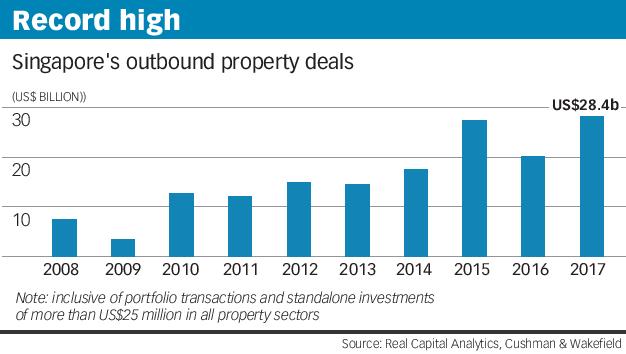 The largest Singaporean deal in 2017 was GIC's acquisition of Monogram Residential Trust, through its stake in a Greystar fund, for US$4.4 billion.

The SWF, also the Republic's largest outbound investor last year, seemed to have shifted its strategy in the US from logistics to residential properties.

GIC also started 2018 with a US$247.5 million investment in multi-family properties in the US.

The second largest deal in 2017 was GIC's acquisition of a portfolio of 24 student accommodation assets in the US with the Canada Pension Plan Investment Board and The Scion Group for US$1.1 billion.

This was followed by GIC's acquisition of a 95-per-cent stake in 60 Wall Street, an office building, for US$988 million.

The fourth largest deal was Mapletree Investments' and Mapletree Industrial Trust's purchase of 14 data centres in the US for US$750 million.

Priyaranjan Kumar, Cushman & Wakefield's regional executive director of capital markets for the Asia-Pacific, said Singapore continues to be a trade-surplus economy with limited assets to which capital can be deployed.

"Hence, both sovereign and non-state companies have been pioneers in global real estate investments," he said.

Buyers of overseas real estate have been diverse as well, ranging from SWFs to real-estate investment trusts, developers, private wealth and unlisted funds.

Singapore investments have remained concentrated in the Asia-Pacific, which accounted for more than 40 per cent of the exposure in 2017. China, in particular, was the fourth largest destination for Singapore outbound transactions.

Some European markets are also gaining traction for Singapore-based investors; German real estate for instance has emerged to become the "poster child" in the post-Brexit world.

Miss Zialcita noted that Singapore-based investors are largely long-term investors in real estate. "The normalisation of monetary policies by central banks is expected to be gradual, and conditions will remain supportive of real estate investments globally," she said.

MAINBOARD-LISTED indium ingot dealer USP Group on Sunday announced changes in the agenda for the extraordinary...

THE manager of Lippo Malls Indonesia Retail Trust (LMIRT) has announced a further extension to the long stop date...