Upbeat mood holds sway despite drop in developer sales in May

May sales down 34% month on month due to absence of any major launches, but agents say home buying sentiment is strong
Kalpana Rashiwalakalpana@sph.com.sg@KalpanaBT
"As one investor told me, he takes ABSD (additional buyer's stamp duty) as the COE - or certificate of entitlement payable for car purchases - when buying property." - Ong Choon Fah

SINGAPORE developers' private home sales fell by about a third (34.3 per cent) between April and May 2017.

This marks the second consecutive decline in the month-on-month numbers; developers had moved 1,780 units in March.

But property consultants are upbeat, noting that sales of more than 1,000 units last month, coming overwhelmingly from previously launched projects, is a reflection of strong home buying sentiment.

MYP to sell ABI Plaza for S$200m to Artemis Ventures

In fact, primary market demand for units in previously launched projects has remained above 1,000 units for three consecutive months - at 1,079 units in March, 1,004 units in April and 1,008 units in May, said property consulting group JLL.

Moreover, the 5,544 private homes that developers sold in the first five months of this year is 71.8 per cent higher than the 3,227 units transacted in the same period last year. Some consultants expect full-year sales volumes to surpass initial expectations. 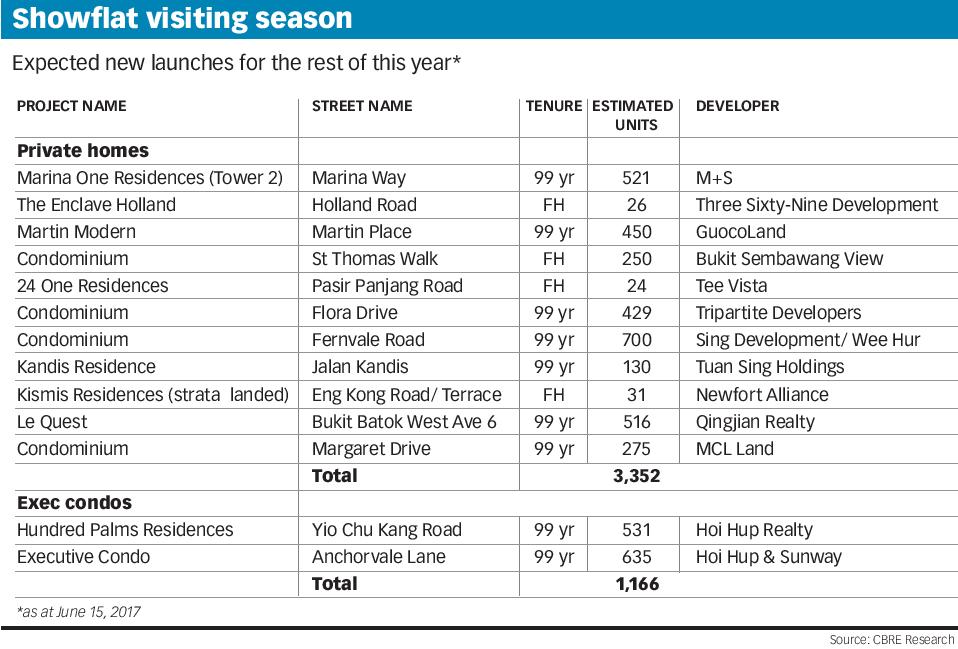 Sentiment on the ground is improving. Edmund Tie & Co's research head Lee Nai Jia said: "A lot of people are looking for residential properties after waiting for years because of the cooling measures. So we're seeing some pent-up demand."

Agents report that the March reduction in the holding period for the seller's stamp duty (SSD) on residential property - from four years previously to three years - has encouraged investors to come off the sidelines and buy a unit at recently launched projects.

As ERA Realty Network's key executive officer Eugene Lim, said: "Buyers will have the flexibility to resell...when the project is completed, without having to pay SSD. This allows them to take profit should the opportunity present itself."

While the additional buyer's stamp duty (ABSD) remains intact, Ong Choon Fah, chief executive at Edmund Tie & Co, reckons that "people have come to accept it as part of the cost of buying residential property". "As one investor told me, he takes ABSD as the COE - or certificate of entitlement payable for car purchases - when buying property."

The view that private home prices will bottom out this year is also gaining traction in the market.

CBRE Research head of Singapore and South-east Asia Desmond Sim said: "Those who were sitting on the fence are probably locking in purchases in anticipation of prices appreciating due to a few factors - including bullish residential land prices that developers have been paying of late, which may stoke the view that end-unit property prices are poised to rise in the near future."

Agreeing, ET&Co's Mrs Ong added: "If the government further relaxes the cooling measures, many are of the view that developers will edge prices up higher."

JLL's head of research and consultancy for Singapore Tay Huey Ying was previously expecting developers to sell about 10,000 private homes this year. After studying the May sales numbers released on Thursday by the Urban Redevelopment Authority (URA), she now predicts the figure could come in at 11,000 to 12,500 units - so long as demand for previously launched projects remains robust, even if there are fewer fresh launches in the second half of this year than in the first half.

For each of the past three years, developers have been selling 7,000-plus units.

The only new launch last month was Watercove, a cluster housing project along Wak Hassan Drive in Sembawang. Its developer, Bukit Sembawang, launched 20 of the project's 80 units last month, of which 16 were sold at a median price of S$744 per square foot of strata area.

The 1,024 private homes that developers sold in May was down 3.2 per cent year on year.

URA's data also showed that 370 executive condominium (EC) units - a private-public housing hybrid - were sold in the primary market in May, one unit fewer than in April, but higher than the 334 EC units developers sold in May last year.

PropNex Realty CEO Ismail Gafoor observed that consumers continue to pick up properties that are nearing their completion (Temporary Occupation Date). "This is evident in the results of the five best-performing projects in May - especially for Parc Riviera and Sol Acres EC, which have continued to sell well in the first five months of 2017."

Property agents expect primary-market private housing sales to ease again this month from May, as developers continue taking a breather in terms of new launches amid the current school holiday season.

However, preparations are under way for a string of launches starting next month; Hundred Palms Residences, an EC project in Yio Chu Kang Road; GuocoLand's Martin Modern condo in Martin Place; and Qingjian Realty's Le Quest in Bukit Batok West Avenue 6 are among the projects expected to be launched in July.

Ms Tay of JLL said: "Sales volume should rebound in July as developers rush to launch projects and buyers rush to pick up units ahead of the Hungry Ghost Month, which falls between Aug 22 and Sept 19, typically considered an inauspicious period by the Chinese for making large financial commitments."

Amid the exuberant views that emerged in the market after URA's release of the May developer housing sales data, Mrs Ong of ET&Co noted that "not all projects are selling like hot cakes".

Her colleague Dr Lee said: "While sentiment has improved in the primary market, in the resale market, some buyers are making very low-ball offers, reflecting their sense of uncertainty - volatility in the global economy, UK situation, etc.

"A higher proportion of buyers in the resale market are owner occupiers - compared with the developer sales' market. So we may be seeing a two-tier market emerging: Those buying for immediate owner occupation and who have to pay up the full purchase price pretty soon may still be cautious, especially with rising interest rates affecting their ability to service mortgages, versus those buying a unit in a new project under construction as an investment. The second group of buyers make progress payments on their purchase to the developer and are eyeing prospects of reselling their unit for a profit as the project nears completion."

FRASERS Centrepoint Trust's (FCT) private placement has closed about 2.8 times subscribed and priced at the bottom...

[TOKYO] Asian stocks consolidated at the open on Tuesday amid end-of-month portfolio adjustments. The US dollar...

No walk in the park for SuperPark creditors, staff