Housing developers need to get a sales licence and set up project accounts. Non-residential developers may have to do the same. Public views being sought on several points
Kalpana Rashiwalakalpana@sph.com.sg@KalpanaBT
The Urban Redevelopment Authority (URA) is seeking public feedback on the changes it proposes to make to the rules for non-residential developers, so as to better protect the interests of those who buy uncompleted commercial and industrial properties.
BT PHOTO: JAMIE KOH

THE Urban Redevelopment Authority (URA) is seeking public feedback on the changes it proposes to make to the rules for non-residential developers, so as to better protect the interests of those who buy uncompleted commercial and industrial properties.

"These changes will enhance transparency and raise industry standards, to help buyers make informed decisions," the URA said on Monday.

The URA is also consulting the public on proposed anti-money laundering (AML) and counter financing of terrorism (CFT) requirements to be imposed on all residential and non-residential developers.

Members of the public have until March 12 to leave their feedback at https://ura.sg/scpafeedback.

The URA has also reached out to industry stakeholders such as the Real Estate Developers' Association of Singapore for its views.

Currently, developers do not need to obtain a sale licence for selling units in uncompleted commercial and industrial projects - unlike for residential developers.

Neither do they have to set up a separate project account for each development to ensure that buyers' progress payments are used only for purposes linked to the project, such as to pay the contractor for work done. 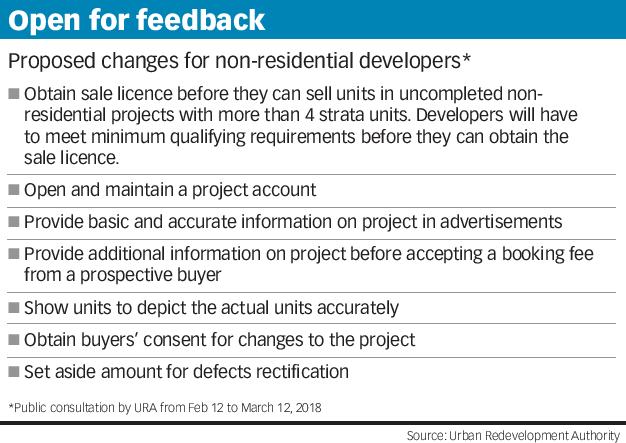 However, things are set to change. The URA proposes to require developers to apply for a sale licence if they are developing and selling units in uncompleted non-residential projects with more than four strata units. They will have to meet minimum qualifying requirements before they can obtain this sale licence.

Developers of commercial and industrial projects will also have to open and maintain a project account. Instalments of the purchase price received from buyers up to the issue of Temporary Occupation Permit and construction loans for the project must be deposited into the project account; withdrawals are allowed only for purposes related to the development of the project.

In addition, the URA is looking to roll out rules on advertisements for non-residential developers. In these advertisements, they will be required to provide basic, accurate information on the project, such as the tenure and the expected date of vacant possession. These advertisements must follow the approved plans, and not have false or misleading information.

To enable their buyers to make informed decisions, non-residential developers will also be required to provide additional key information on the project before accepting a booking fee from a prospective buyer. This additional information can be, for example, a drawn-to-scale floor plan depicting all floor spaces (such as air-conditioner ledges and voids) in the strata unit, as well as the developer's track record.

This requirement is already in place for housing developers.

Savills Singapore research head Alan Cheong said: "I think the URA is merely trying to harmonise the terms of sales for commercial and industrial properties to that for private residential properties.

"In a way, this will make developers and agents' briefings easier, when the same rules for sale apply to both residential and non-residential property sectors."

The URA is also proposing to require non-residential developers to obtain buyers' consent for any changes to the unit or substantive changes to the common property, if the changes made are not due to new requirements introduced by the authorities. In the case of changes made because of new requirements from the authorities, developers will only need to inform the buyers.

Feedback is also being sought on amending the payment schedule to set aside 4 per cent of the purchase price for rectifying defects, so that buyers can claim the cost of rectification works if the non-residential developer fails to carry out the works. (This is lower than the 5 per cent currently for residential projects.)

Under the proposed AML and CFT requirements, developers are to implement measures to meet Singapore's obligation to fight money laundering and terrorist financing.

New rules will be implemented to impose the requirements on all residential and non-residential developers, such as having to conduct customer due-diligence checks to verify a customer's identity and maintain transaction documents and records of customer due-diligence checks for a specified period following the termination or completion of a transaction.

Developers will also have to put in place internal policies, procedures and controls relating to customer due-diligence measures, keep records and train their employees on AML and CFT-related matters.

A seasoned developer commented: "This may be quite tricky, especially for a big project of, say, 500 residential units. If you tell your staff to follow all the SOPs, the process of generating options for a couple of hundred buyers on launch day is going to be stressful. If you take too long, buyers may get frustrated."

While it would be possible to get potential buyers checked before a project's launch day, the reality is that "the process in the showflat does not quite work that way", he added.

"Most developers would like to capture buyers on their sentimental feeling. You don't want them to think too much while you do pre-due diligence before options grant day."

Mr Cheong of Savills identified a grey area regarding the AML requirements: "Although developers of both residential and non-residential properties have to conduct customer due diligence checks, does it also apply when they take in equity partners or accept loans or variants of such from non-bank lenders?

"For example, for project funding, do developers have to go through the AML checklist when they syndicate for equity partners or funders?"

Broker's take: DBS says worst appears to be over for Sunpower, upgrades to 'buy'

DBS Group Research has upgraded Sunpower Group to "buy" from "hold with a raised target price of S$0.69 from S$0.49...

Tivoli Lodge condo in Geylang up for collective sale with S$17.3m guide price

FREEHOLD residential development Tivoli Lodge has entered private treaty on Friday - after having been launched for...