A RESIDENTIAL site at Woodleigh Lane near Bidadari housing estate is the latest to draw aggressive bidding.

This time, 15 bidders took part, with CEL Unique Development, a joint venture between Chip Eng Seng, Heeton and KSH, putting in the highest bid of S$700.7 million, which translates to about S$1,110 per square foot per plot ratio (psf ppr).

Keen competition was evident, with a tight margin of 0.8 per cent between the first and second bids. The top four bids were also all neck-and-neck with a tight 3.6 per cent margin. A total of five bids came in at above S$1,000 psf ppr.

Currently, units at nearby new developments are selling at far below that. Poiz Residences and Forest Woods were both transacting at a median price of just under S$1,400 psf in May this year.

A year ago, a psf ppr price figure of above S$1,000 would have caused jaws to drop, but this is gradually becoming a norm in recent tenders. 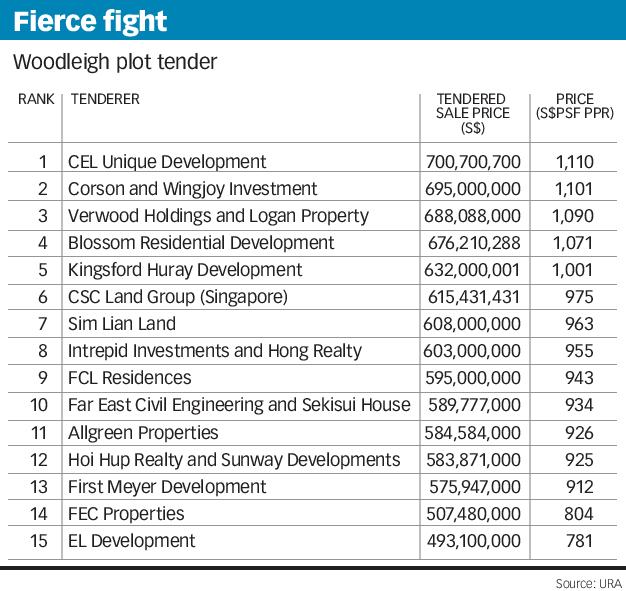 In June, Singapore Press Holdings and Kajima Development put in a top bid that translated to S$1,181 psf ppr for a mixed-use Bidadari site.

In May, Hong Kong's Logan Property and Chinese developer Nanshan Group put in a bid that works out to S$1,050 psf ppr for a Stirling Road plot. Both this and SPH's bid carried a total quantum above S$1 billion.

Listed Chip Eng Seng and KSH said in disclosures that they plan to build a condominium comprising 16-storey residential blocks on the Woodleigh site, with a total of over 800 units.

Corson and Wingjoy Investment, units of Keppel Land and Wing Tai respectively, put in the second highest bid of S$695 million, or about S$1,101 psf ppr.

City Developments' Verwood Holdings paired up with Logan Property to put in the third highest bid of S$688.1 million, or about S$1,090 psf ppr.

Desmond Sim, head of CBRE Research, Singapore and South East Asia, called the results "unsurprising", as the site had been identified as a high-profile one from the start, being located right beside Woodleigh MRT station and within the up-and-coming Bidadari precinct.

Besides, market sentiment has been picking up for some time now, and developers have been keen to restock their land bank with key development sites in order to keep their businesses running, he said.

Ong Teck Hui, national director for research and consultancy at JLL, said: "The bidding war for residential sites has escalated further in this tender, driven by bidders' determination to secure this attractive site in a market that is potentially recovering."

Indeed, many analysts are anticipating a bottoming-out of the market at the end of this year, and for residential prices to appreciate again starting 2018.

Christine Li, director of research at Cushman & Wakefield added that the tender results show that when a choice city-fringe site is up for sale, there will be no shortage of interest.

Asked if the current land bidding behaviour will undo the effects of property cooling measures, Mr Sim from CBRE said it is difficult for the government to gauge the amount of state land to release for sale, because if it were to attempt to do so, it could easily tip the balance over and create an oversupply situation - a repeat of what happened in 2012.

"With the imbalance between demand for land and the number of development sites available in the government land sales programme, we will likely see more collective sales committees being formed in older estates. More developers will probably seek this avenue as an option for replenishing land banks," Mr Sim said.

At last week's Real Estate Developers' Association seminar, some industry players described the compounding effect of aggressive land bidding, saying that since there can only be one winner for a site, each tender exercise leaves a large amount of capital on the sidelines waiting to be deployed into the next land parcel, thus feeding an upward spiral.

A SUBSIDIARY of Mainboard-listed fuel oil trader AnAn International will take a 70 per cent stake in a French energy...

CATALIST-LISTED Sincap Group does not know of any undisclosed concerns that should be brought to shareholders'...

[NEW YORK] In the last week of March, with the Covid-19 pandemic upending lives and markets, Ken Griffin started...

Boeing 737 MAX could get EU clearance 'by year's end'

MAINBOARD-LISTED health-care provider New Silkroutes Group has been told to hand over information and papers for a...