Muted stock declines suggest doubt about war; Korean won falls against US dollar, but greenback's weakness is driving other currencies
Kenneth Limkenlim@sph.com.sg@KennethLimBT
This may be the time for investors to take profit and raise cash in their portfolios to reduce risks, suggests Credit Suisse chief investment officer for the Asia-Pacific John Woods.
PHOTO: REUTERS

ASIAN investors shed risk as expected on Monday, in response to North Korea's latest nuclear claims, but tempered declines suggested scepticism about whether the heightened tension would meaningfully affect the global economy.

CIMB economist Song Seng Wun said: "There's no panic selling, just quiet resignation from traders that if things remain as they are, we'll get over it as usual.

"The probability of war remains extremely low, although it's an extremely risky game."

North Korea announced a test of a nuclear bomb over the weekend, prompting worldwide condemnation. In the United States, President Donald Trump tweeted the possibility of trade sanctions against countries which do business with North Korea; his defence secretary, Jim Mattis, warned of a "massive military response" if North Korea threatened US territories or allies.

The United Nations Security Council was to hold an emergency meeting at 10pm on Monday, Singapore time.

OCBC head of research Carmen Lee noted that almost every stock in the STI fell, but reckoned that a correction may have been due anyway.

"The sharp sell-off was partly triggered by the fact that most regional and Singapore stocks have registered good gains since the start of this year, and in light of the uncertainty ahead, investors are lightening their equity holdings."

Still, a defensive portfolio may be prudent, given expectations for ongoing uncertainty.

She added: "While we are still positive on the longer-term outlook, we expect the near-term volatility to dampen sentiment and result in some price weakness. This will favour defensive stocks.

"For the current uncertain situation, it may be good to lock in some profits and wait for better opportunities, when prices correct, to re-enter the market."

In currencies, the Korean won fell by about 0.7 per cent against the US dollar to about 1,130 in the morning; the Japanese yen, traditionally a safe-haven currency, rallied by 0.4 per cent to about 109.8 yen against the greenback. 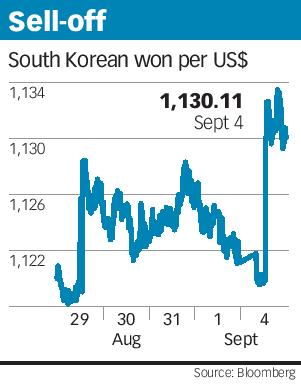 Credit Suisse chief investment officer for the Asia-Pacific John Woods said: "The major players of such market actions appear to be short-term speculators only."

Mark McFarland, chief economist for Asia at Union Bancaire Privee, said that the US-dollar weakness - as investors pare their forecasts for the pace of interest-rate hikes this year - is a bigger factor for currencies that are not the won.

"The won is automatically going to suffer under these circumstances, and it will recover when sentiment improves.

"For any other currency, the weak dollar is the real driver at the moment...There's probably more downside risk to the dollar at the moment, especially against commodity currencies like the Canadian dollar and Swedish krona."

Credit Suisse, DBS and UBS all advocated long positions on the precious metal. CIMB's Mr Song said some gold made sense in a portfolio: "While we are encouraged by global and earnings growth, we are reminded that there are risks like North Korea. So yes, it's good to hold gold, Bitcoin or other alternative assets - maybe less of Bitcoin, but definitely gold."

The declines were not as drastic as a number of observers had expected.

Harmut Issel, UBS wealth management head of equity and credit in the Asia-Pacific, said his firm's base assumption is that tensions will eventually fade.

"In our view, the relatively modest pullbacks that we have seen in recent weeks suggest that investors do not assume a worst-case military escalation at this point. In the current situation, there might be renewed concerns over trade-related measures and this could potentially impact Asia."

Credit Suisse's Mr Woods, however, said that the mild reaction does not reflect a market relaxing on the event, and key North Korean patriotic observances on Saturday and on Oct 10 could trigger more selling.

"Investors may want to take profit and raise cash in their portfolios to reduce risks," he said.

Mr McFarland said investors should not dismiss these threats too easily: "You might have more of these periods of volatility, but then there's a risk that people become numb and then they go, 'Well, whatever'. And the danger is in thinking, 'Oh, another one, who cares?'

"But some things don't need to be done with malice. Something could be launched accidentally, for example... You attribute a low probability to it, but the payout is immense in a negative sense if it happens. These are called black-swan events."

First Reit’s distribution per unit for Q4 2019 was flat year on year at 2.15 Singapore cents.

[LONDON] The BBC said on Wednesday it will axe 450 jobs from its news division in a cost-saving plan that will...

[DUBAI] Four members of a Chinese family who arrived in the United Arab Emirates from Wuhan have been diagnosed with...