The 10 biggest Catalist stocks averaged a 35% return this year, but are more volatile and riskier than blue chips
Cai Haoxianghaoxiang@sph.com.sg@HaoxiangCaiBT
As markets rallied worldwide, the 10 biggest stocks on Catalist, the secondary board of the Singapore Exchange (SGX), have averaged a 35 per cent return year to date as at Oct 4.
PHOTO: ST FILE

A tale of two indices

SMALL is beautiful - but only the best of them are.

As markets rallied worldwide, the 10 biggest stocks on Catalist, the secondary board of the Singapore Exchange (SGX), have averaged a 35 per cent return year to date as at Oct 4.

They outperformed the 30-stock blue chip Straits Times Index (STI), which managed only a 12 per cent rise, said an SGX market update.

But a longer and broader view shows how small-cap stocks are still a dangerous hunting ground.

Singapore shares open higher ahead of fourth budget; STI up 0.9%

The FTSE ST Catalist Index continues to underperform the STI, returning only a comparable 3.6 per cent year to date. 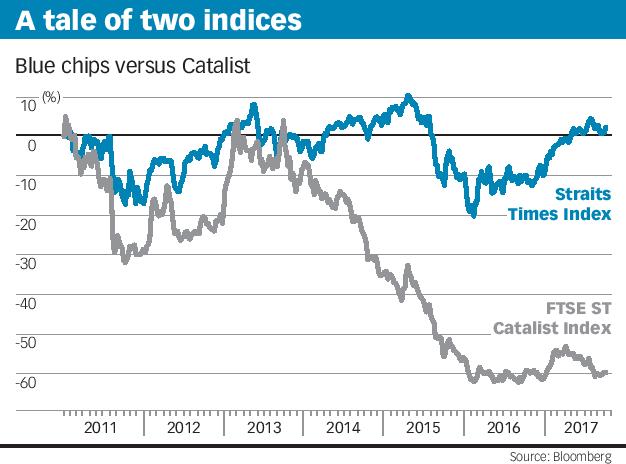 "Due to either inadequate due diligence, incorrect judgement or poor diversification, investors can suffer heavy losses."

While the FTSE ST Catalist Index was 1,144.86 points at end-2010, it stands at under 460 points today, meaning investors in a representative portfolio of second-board stocks would have lost 60 per cent of their money in the last six years and nine months.

By contrast, the STI was up 2 per cent over that period.

One 2017 Catalist bomb was QT Vascular, a medical technology company which designs and commercialises treatments for heart disease such as its "Chocolate" line of balloon catheters.

The firm is down almost 90 per cent this year, and is the second worst performer on SGX after mainboard-listed ISR Capital.

But investors in a select number of Catalist stocks have done well.

These stocks have market capitalisations ranging from S$200 million to S$800 million.

The worst performer among them is Malacca property developer Hatten Land, down 32 per cent from its 29.5-cent opening debut on Catalist after a backdoor listing. (see amendment note)

NRA Capital's Liu Jinshu, who covers Moya, Unusual and Hatten Land, likes them for being well positioned to capitalise on growth opportunities.

Amid the rally in small-cap stocks this year, boutique fund managers have taken the opportunity to sell some Catalist names.

"The stock is not that cheap anymore and we do not like the lumpy nature of their business," he said.

However, his firm added a position in Starburst Holdings at S$0.39 a share.

Catalist-listed Starburst specialises in the design and engineering of firearms training facilities. After several years in the doldrums as a result of disappointments over contract wins and profitability, its shares have doubled since March.

"After a good run this year, I think the Singapore market is presently in a consolidation stage. All eyes will be on the coming quarterly earnings to see if the results would boost the market further," he said.

In its market update, SGX highlighted that the sponsor-supervised Catalist regime has enabled companies to raise funds. Fund-raising has accelerated in recent years.

Since 2010, the market capitalisation of Catalist has doubled to almost S$12 billion. The number of companies on it rose from 131 to 197.

Year to date, there have been 13 listings through initial public offerings (IPO) and reverse takeovers on Catalist, raising S$263.7 million in IPO funds and contributing to a total IPO market capitalisation of S$2 billion, or a quarter of Catalist's end-2016 market cap.

After listing, Catalist companies raised, through secondary fund raising, some S$375.8 million year to date and more than S$3.7 billion in the last five years.

Catalist companies do not need to demonstrate a track record of profitability, so some less-than-desirable companies will slip through, said NRA's Mr Liu.

However, the board allows SGX to be a more competitive listing destination, and investors can partake in a bigger set of risk and return opportunities, he said.

Amendment: The story has been updated to reflect how Hatten Land, with its closing price of 20 cents on Oct 4, was down 32 per cent from its first-day opening price of 29.5 cents, and not 52 per cent as originally stated.

[SHANGHAI] Meituan Dianping's shares soared after it reported a smaller than expected 13 per cent slide in revenue...

[SEOUL] South Korean shares rallied for a second day gaining more than 1 per cent as reopening of global economies...

China will maintain stimulus even as economy improves